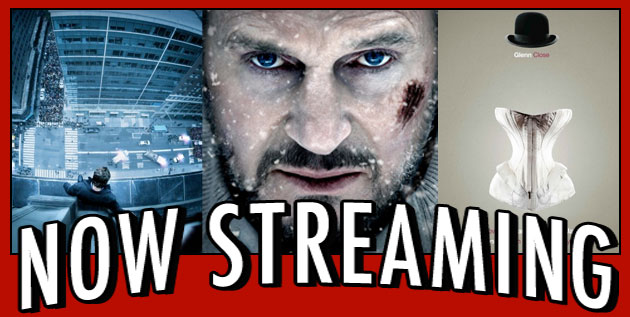 [Now Streaming] Your ‘The Grey,’ ‘Man on Ledge,’ and ‘Albert Nobbs’ Alternatives Each week within this column we strive to pair the latest in theatrical releases to worthwhile titles currently streaming on Netflix Instant Watch. This week we offer alternatives to The Grey, Man on Ledge, and Albert Nobbs.

As Sundance talk overruns the blogosphere, three star-studded efforts aim to win your box office dollar this weekend. Liam Neeson takes on wolves; Glenn Close binds her breasts, and Sam Worthington threatens suicide, all for your entertainment. But if you crave more tales of survival, high-society and revolt, we’ve got a selection of the best titles now streaming on Netflix.

Following a harrowing plane crash in the Alaskan wilderness, a team of oil riggers are forced to face the elements and a blood-thirsty pack of wolves in the latest from Joe Carnahan. Liam Nesson, Dermot Mulroney and Frank Grillo co-star. Often a plane crash is just the beginning…

The Edge (1997) Also set in the Alaskan wilderness, this action-thriller stars Alec Baldwin and Anthony Hopkins as two civilized men who are pressed to abandon decency and tap into their primal instincts when a plane crash leaves them at each others’ mercy. There’s also a bear! Harold Perrineau co-stars.

Lost (2004) Also featuring Harold Perrineau as a plane crash survivor is J.J. Abrams hit sci-fi series in which a motley crew of castaways must fight for their survival on a dangerous and mysterious island. Matthew Fox, Evangeline Lilly and Josh Holloway co-star. All six seasons are now streaming.

The Crazies (2009) In this horror feature, survival takes a different turn. After a plane that carries a deadly chemical crashes into a charming smalltown’s water supply, its residents begin to transform from kindly neighbors to merciless killers. Timothy Olyphant and Radha Mitchell co-star in this remake of George A. Romero’s 1973 horror allegory.

Before a disgraced cop is sent to jail for a crime he insists he didn’t commit, he takes to the ledge of a high-rise and demands the patience and open-mindedness of the police psychologist hired to bring him in. Sam Worthington and Elizabeth Banks co-star. Lone men take on a broken system in these tense thrillers.

The Next Three Days (2010) Elizabeth Banks plays a wife and mother accused of murder in Paul Haggis’ Pittsburgh-set crime-thriller. Russell Crowe stars as her devoted husband, a college professor who dedicates his mental prowess to constructing a complicated plan to bust her out of jail before its too late. Olivia Wilde and Liam Neeson co-star.

Limitless (2011) Plagued by a crippling writer’s block, would-be novelist Eddie Morra (Bradley Cooper) is willing to try anything to break through – even a new and untested enhancement drug. When this strange little pill unlocks all of Morra’s potential, he easily maneuvers around corporate hierarchies and societal constructs to become wildly successful at anything he tries. Which of course draws the wrong kind of attention. Robert De Niro and Anna Friel co-star.

Primal Fear (1996) Richard Gere stars as a defense attorney more interested in headlines than his clients, but that all changes when he’s called in to defend a young man accused of slaughtering a local man of the cloth. Ed Norton made his breakthrough with his multi-faceted performance as an altar boy accused of the unthinkable, but as to how this relates to our theme…well, that would be telling.

Glenn Close stars as a the curious title character, a waiter who holds a pair of secrets behind his vest. Mia Wasikowska and Janet McTeer co-star as Nobb’s love interest and confidante respectively. For more tales of British romance studded with secrets, try these tantalizing titles:

Sense and Sensibility (1995) Ang Lee directs this charming adaptation of Jane Austen‘s tale of sisterly devotion and scandalous affections. Emma Thompson, who won an Oscar for her screenplay, stars a Miss Dashwood, a woman who is distracted from her own romantic possibilities by the recklessness of her spirited younger sister (Kate Winslet). Alan Rickman and Hugh Grant co-star.

Mansfield Park (1999) This lesser-known Jane Austen effort centers on a humble and impoverished young woman named Fanny Price (Frances O’Connor) who is taken in by her wealthy aunt and uncle and is soon taken by her pious cousin Edmund (Johnny Lee Miller). But troubles arise as the charismatic but morally questionable Crawford siblings visit, bringing the threat of sex and debauchery. Director Patricia Rozema gives the story a unique new twist by blending some of Austen’s own life and journals into Fanny’s tale. HappyThankYouMorePlease  (2011) I was utterly charmed by the directorial debut of How I Met Your Mother star Josh Radnor upon its limited release last spring. This New York City-set indie follows the relationship drama of a flock of twentysomething friends. But before you assume it’s a story you’ve seen a million times before, let me say what sets Radnor’s comedy apart from the pack is that it is both sincere (not schmaltzy) and deeply funny. Radnor has gathered an incredible cast and given them roles that allow these previously undervalued players to shine. Radnor, Zoe Kazan, and Kate Mara tackle the banter dialogue with ease and plenty of charisma. Malin Akerman finally gets a role that displays her depth and winsome charm but the real scene-stealer of Happythankyoumoreplease is Tony Hale who proves his ability as a love interest and leading man with a completely endearing and unforgettable monologue. Simply put, don’t let its overly eager title to turn you off. This is rom-com is whip smart, heartfelt and an utter delight. [Interview w/ writer-director-star Josh Radnor: Part 1  Part 2]