No Sudden Move Review: Steven Soderbergh’s Noir Homage is Both Relaxed and Invigorating 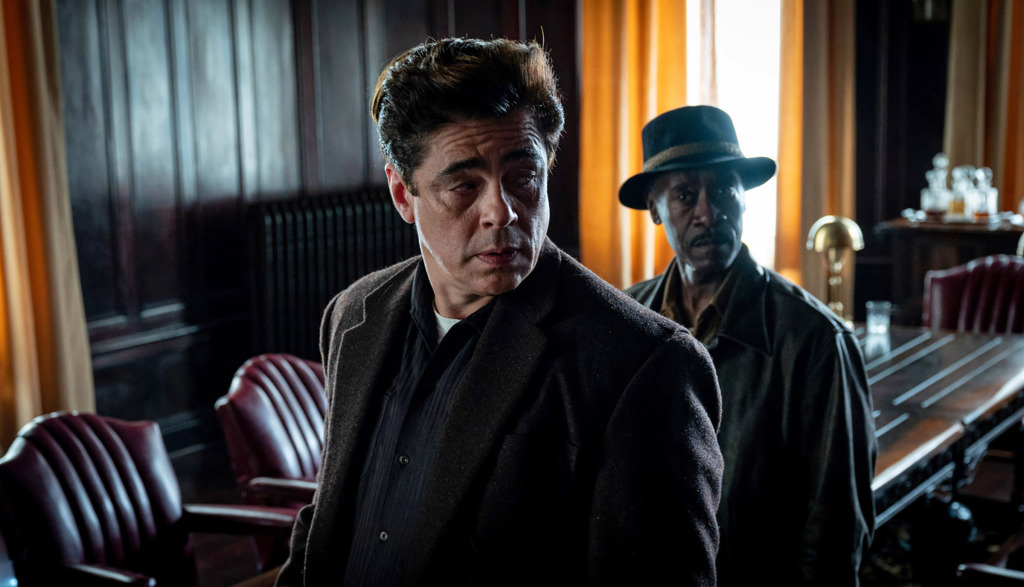 Steven Soderbergh is one of the few commercial American directors who makes films about money—stealing it (the Oceans trilogy, Out of Sight, The Informant!, The Laundromat), lacking it (Erin Brockovich, King of the Hill), and its intersection with sex, power, culture, and politics (Traffic, The Girlfriend Experience, Magic Mike, High Flying Bird). He’s a filmmaker who’s keenly aware of the reasons why some have money and many others don’t. He knows what it says about a person and where they fit on the capitalist hierarchy. His genre obsessions make these ideas go down smoothly, sometimes almost deceptively so, but there’s genuine indignation at the inequity of it all combined with honest compassion for those stuck on the losing side of the system. It’s too easy to say his films are just metaphors for life in America, though that’s certainly a part of it. It’s more honest to say he places seekers and thieves in the center of his films because, at least in art, they demand focus and control the action. Whereas in life they’re always defined by the powerful people they’re trying to swindle.

Soderbergh’s latest heist picture, the 1950s period piece No Sudden Move, concerns two Detroit criminals who follow the money until they physically can’t follow it any farther. Curt Goynes (Don Cheadle) and Ronald Russo (Benicio Del Toro), both on the outs with the mob for different reasons, are hired by recruiter Doug Jones (Brendan Fraser) to hold a family hostage. Their associate, Charley (Kieran Culkin), forces patriarch, bumbling adulterer Matt Wertz (David Harbour) to exploit his affair with his boss’ secretary to retrieve some crucial documents in the office safe. Things predictably go awry when Matt discovers the documents aren’t there and tries to proffer fake ones at the same time Curt realizes he and Ronald have been set up. More complications arise involving Ronald’s affair with Vanessa Capelli (Julia Fox), wife of mob leader Frank Capelli (Ray Liotta), and a suspicious detective (Jon Hamm) hot on the gang’s trail.

No Sudden Move sports enough plot for it to be described as “overstuffed,” but while the size of the cast might suggest bloat, the film rarely seems to overflow with incident. Soderbergh and screenwriter Ed Solomon build a world with many different people whose individual choices impact their immediate environment, which is itself part of a larger, more indifferent economic system that Goynes and Russo are trying to infiltrate. When enough money can potentially be redistributed by force, it’s reasonable that characters on all rungs of the economic ladder will inevitably find themselves involved in the scheme. It might be completely accidental that this thread thematically dovetails with Soderbergh’s obvious pleasure in collaborating with large ensembles. It could also be an organic outgrowth of that tried-and-true working method. It tracks all the same.

After 29 narrative features, Soderbergh has developed a proficient sense of staging that feels simultaneously relaxed and invigorating. Much of the ineffable fun of watching No Sudden Move comes from being in the hands of someone who knows how to achieve what they want without trying unduly hard to impress. For example, Soderbergh expertly executes the Wertz home invasion sequence, which involves three rooms and up to seven people. He slowly and steadily generates tension from multiple directions. Amy Seimetz’s terrified-cum-irritated performance as Matt’s chain-smoking wife keeps the scene delightfully off-kilter. Meanwhile, the presence of the Wertz’s two children—a frightened, yet curious Matthew Jr. (Noah Jupe) and his strangely calm younger sister Peggy (newcomer Lucy Holt)—instill even more anxiety into the sequence. On paper it’s a scene that’s been done many times over, but Soderbergh makes it feel new and compelling simply through purposeful blocking and judicious edits.

There are many times in No Sudden Move when the performances, the writing, and the direction are all working in tandem at the exact same level; it’s thrilling to witness, even as nothing much is actually happening. Whenever there are clear imbalances—an actor is off-key with the rest of the scene, or some dialogue feels underdeveloped, or a framing choice distracts from the action—other elements tend to pick up the slack. Solomon’s script entices on its own merits, as well as the actors’ interpretation of it, yet it’s Soderbergh who enlivens what would otherwise be a bog-standard noir homage by simply committing to the fundamental needs of every scene. That’s not damning with faint praise. It’s downright rare to see such casual craft employed in mainstream American filmmaking nowadays.

Soderbergh shoots No Sudden Move with an extremely wide lens, providing a fisheye look that sometimes distorts the edge of the frame, warping the size of anything that isn’t in direct center. In a recent WTF interview, he claims he wanted to bring the viewer “out of a space in which you have a 90-degree grid…a world in which things are that squared-off.” If you squint, it’s possible to see his point here: the world of Detroit criminals and their intersection with the automobile and real estate industry bends around each other. Everything is connected on a continuum, and nothing, whether it’s money or relationships across vertical or horizontal planes, exists in a neat rectangular space. But Soderbergh’s photography frequently distracts, especially in wide shots or whenever the camera pans or tracks. Sometimes it’s not so off-putting, but other times you catch the corner of a frame and it’s like looking at someone’s reflection through a bottle. This purposefully divisive aesthetic choice in an otherwise accessible film demonstrates that Soderbergh’s experiments, while abstractly appreciated, can occasionally get the best of him.

Despite his aesthetic leaps of faith and distribution practices, Soderbergh employs a soft touch relative to other auteurs of his generation. He generally chooses to place writing and performance front and center, allowing genre and story to command attention instead of any self-conscious moves behind the camera. This inevitably leads to charges of “impersonality”—somewhat understandable but nevertheless amusing, seeing how often Soderbergh integrates or foregrounds his production practices into his features, especially of late. Soderbergh, who helped generate on-set COVID safety protocols and directed a socially distanced Academy Awards ceremony, includes two cheeky bits in No Sudden Move about masking that are impossible to ignore after the last 16 months and change. When the impulsive Charley aggressively re-enters the home with intent to harm, Matt informs him he forgot his mask. “It itches,” Charley responds. Earlier, when Mary comforts a scared Matthew Jr., she tells him, “They don’t want to hurt us. That’s why they’re wearing masks.” There’s something comforting about realizing Soderbergh will continue to make movies to his bitter end, adjusting to every terrible new reality in the entertainment industry and our sociopolitical landscape while staring it directly in the eye. “I’m the cockroach of this industry,” Soderbergh self-deprecates in that same WTF interview. It stands to reason that there are much worse artistic fates than outlasting everyone.

No Sudden Move is now streaming on HBO Max.