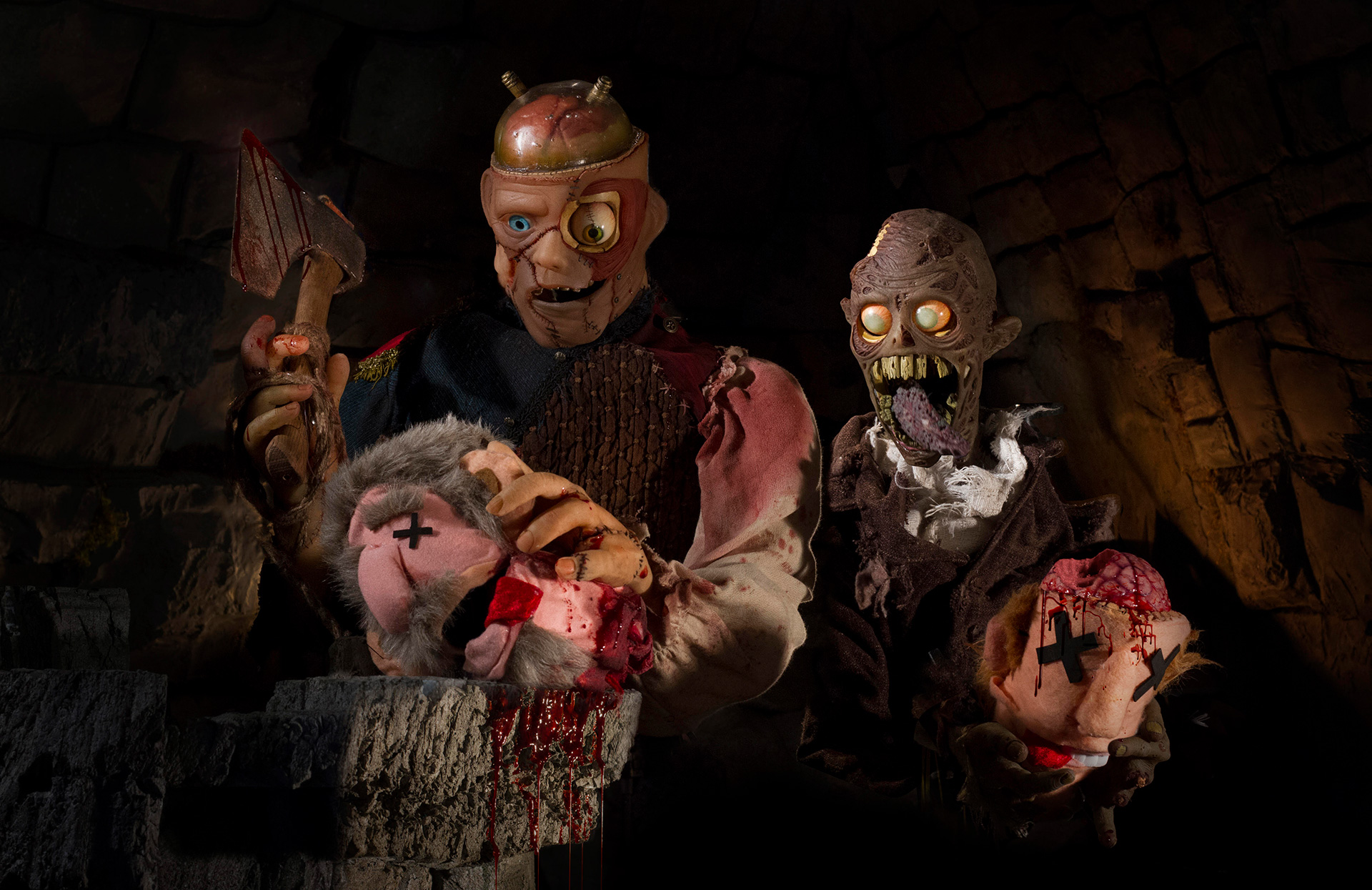 Centuries ago in a small kingdom ravaged by evil wizard The Moroi, a king made a pact with the God of Death to usher in what he believed was his only chance at peace. By giving them cursed weapons with the power to vanquish their foe, Death also bestowed a prophecy that foretold an orgy of blood fated to take tenfold the blood spilled by the king’s hand the moment his royal line is ended. And it worked. The wizard was destroyed and the weapons long-since buried in the graves of those who fought with them. The kingdom carried on with legends of a monster patrolling the forest and a hope that the townspeople would never have to pay the steep price their former leader set for them.

This is the backdrop of Jesse Blanchard’s seven-years-in-the-making all-puppet horror feature entitled Frank & Zed. The latest king is on his deathbed and his heir is a dullard no one believes will ever find a bride to hold the curse at bay. So the Priest and Lord Regent band together in order to insulate themselves with the bodies of peasants before it becomes too late. If they’re doomed anyway, why not try and finagle a way to dictate the terms? The prophecy merely stated blood would spill, not who would supply it. By manipulating the supposed monster in the woods to be their sacrifice, they can therefore send an army of scared villagers to their death, cut the beast down with the reclaimed weapons, and rule.

We aren’t talking about just any monster, though. Frank is a Frankenstein-esque creature rumored to possess the souls of the bodies he was made from. The wizard created him as a servant of death alongside a partner in Zed—a zombified ghoul whose sole purpose is to recharge its compatriot’s fuel source via lightning strike. That’s why Frank hunts. He kills squirrels, collects heads, and puts together a plate of brains to feed Zed and ensure its assistance in this daily ritual that’s left them decaying and in pieces. They’re so beaten and torn that survival has become more difficult each day. And if Zed can’t connect Frank, Frank can’t hunt enough brains. One grows weak and the other weaker until the wizard’s castle lay empty and still.

So like many stories of this ilk, it’s hubris that eventually sparks the prophecy rather than the words uttered to give it life. Right at the moment when the kingdom might be set free thanks to Frank and Zed falling apart, the Lord Regent commences a series of events that ignite the massacre all on its own. His actions also conjure a long-dormant memory within Frank that may or may not deal with Zed’s origins and perhaps his own. It’s an out-of-left-field subplot whose vagueness renders it a strange outlier from the action. Blanchard includes it to provide these “aggressors” compassion, but I’m not certain we need it since their rote machinations already expressed their lack of malice. They don’t hunt humans. They stick to themselves.

There are a few narrative quirks like this that end up working when isolated while causing a bit of tonal inconsistency as part of the whole. When forty odd puppets are otherwise wreaking havoc and screaming bloody murder, however, it becomes easy to let them go and enjoy the chaos. How could you not when the visual spectacle of Blanchard’s passion project proves so unforgettable? Frank and Zed are gorgeously singular with their smoothly plastic sheens that get covered with the sticky, viscous byproduct of ripping bodies apart and chowing down on their brains. Caught in kinetically edited close-ups, we see them lumbering along and grinning respectively as they fulfill their duties for one another and ready for the next intricately orchestrated electric strike to restart the clock.

The villagers are more of the plush, Muppet-variety with sewn features on squishy faces naively cracking jokes and following orders from their domineering elite. Pay attention to their eyes as every character has four possible states—alive (normal), dead (x’s), mind controlled (glowing), zombies (red)—and their vulnerability with axes flying and betrayals looming. It’s a lot of fun to watch them react to danger like Jim Henson’s creatures would. They duck at the last second and stare up at the object of their narrowly averted demise before freaking out to the audience’s delight, but they aren’t all spared for the sake of children watching along. This is a bloody romp with decapitated heads spewing buckets of red liquid everywhere and dissected bodies losing organs left and right.

Blanchard makes good on his promise of an orgy of blood with the final third of Frank & Zed‘s runtime bringing it to life in an unapologetic light. Characters will chop off limbs to prevent themselves from turning into zombies. Blades and hammers will knock heads straight off their shoulders. And grandmothers will do what they must to avenge their loved one’s deaths with nothing more than wooden dowels. They’re all fair game too since the only bad guys are the Priest, Lord Regent, and their one or two followers (like the behemoth that is Grog). Frank and Zed are defending themselves just as much as the villagers so it’s natural to root for them as long as their enemy of the moment is evil rather than innocent.

With practical effects everywhere (clouds, fog, blood, and even fire up the ante) and bisected bodies showing innards rather than puppeteer hands, this avoidable war is always one hundred percent earnest in its carnage. There’s still plenty to laugh at with acerbic quips and absurdly cartoonish moments, but death is real whether or not some die twice. Maybe the stakes themselves aren’t too high considering everyone save Frank, Zed, the Priest, and Lord Regent are purposefully expendable (until the climax turns their clocks to zero too), but not having a bona fide “hero” means anything can happen. Maybe The Moroi will rise again to extinguish everyone’s light with his shadowy hands. Or maybe a ragtag few peasants will save the day and reclaim their kingdom’s honor.

Frank & Zed is playing as part of the online film festival Nightstream.