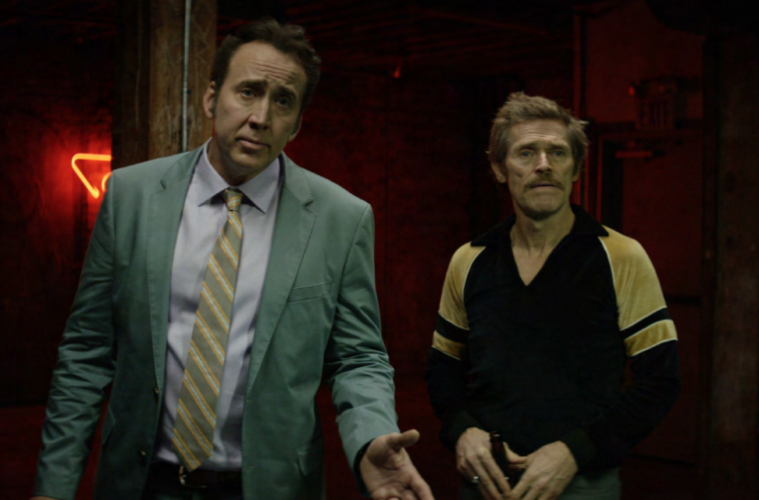 Director Paul Schrader is reteaming once again with Nicolas Cage for Dog Eat Dog — this time throwing Willem Dafoe into the mix, playing a guy named “Mad Dog,” no less. In the film, the pair, along with Christopher Matthew Cook, have all been recently released from prison and must now try their best to adapt to a normal life, despite living in suburban homes, having a hate for the system, and being haunted by demons. The wrench in their plans for adaptation? Well, once a thief, always a thief. As the trio plan the perfect crime — one final job, one final take — things go awry. While the film is still looking for U.S. distribution, the first trailer has arrived today.

We said in our review from Cannes, “Taking the trashy gusto exhibited in The Canyons to whole new extremes, Schrader goes full exploitation for Dog Eat Dog’s first act. In the delirious opening, a wonderfully withered Willem Dafoe, sporting a horseshoe mustache and a collection of awful tattoos, is first shown snorting a huge line of something in front of the TV, then losing his shit at a telemarketer and smashing the phone to pieces, then going into the toilet to inject himself with a hit of something else, then getting into a fight with his lover, then brutally murdering both her and her young daughter with the knife he keeps holstered to his ankle. All of this is depicted at breakneck speed and with anarchic abandon: the editing is all over the place, the image is tinted with various colors – neon pink and blue and green – the frame is fractured and distorted with cheaply rendered hallucinations, and Dafoe – whose character is fittingly called Mad Dog – chews up the scenery, grimacing, screaming and stabbing away at his victims, their blood spraying all over the place.”

See the trailer below (via Cinemaldito), along with a poster for the film that also stars Louisa Krause and Paul Schrader himself.

Carved from a lifetime of experience that runs the gamut from incarceration to liberation, Dog Eat Dog is the story of three men who are all out of prison and now have the task of adapting themselves to civilian life. The California three strikes law looms over them, but what the hell, they’re going to do it, and they’re going to do it their way. Troy, an aloof mastermind, seeks an uncomplicated, clean life but cannot get away from his hatred for the system. Diesel is on the mob’s payroll and his interest in his suburban home and his nagging wife is waning. The loose cannon of the trio, Mad Dog, is possessed by true demons within, which lead him from one situation to the next. One more hit, one more jackpot, and they’ll all be satisfied. Troy constructs the perfect crime and they pull it off, but in the aftermath, they keep finding the law surrounding them wherever they go.