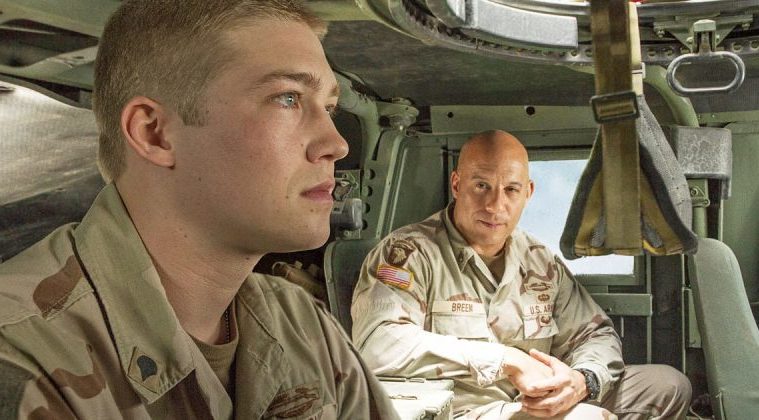 While Ang Lee‘s war story Billy Lynn’s Long Halftime Walk was billed to be technology-advancing fare, the reactions of such advancements were quite mixed coming out of New York Film Festival. But it looks as if only a few select theaters will be able to project it that way, anyhow, and Lee’s full use of 120 FPS, 4K resolution, and native 3D cannot be displayed in this new trailer. So said trailer may, in fact, be an accurate representation for those heading into a theater next month. Based on the best-selling novel, the drama is a melancholy exploration of one young man’s disorientation and attempts to comprehend a life after war.

We said in our review, “The screenplay comes from Jean-Christophe Castelli, adapting Ben Fountain‘s novel, and it is intensely blunt. Though this, of course, appears to be intentional. Most of these characters recite the themes and conflicts in dialogue, saying things such as, “Americans are children who must go somewhere else to grow up, and sometimes die,” along with, ‘Talk is cheap, but money screams. This is our country, guys. And I fear for it.” Though the message is clear, it too often lacks the bite of war-time satires that have come before. Certainly the “realness” of what’s being presented, thanks in part to the increased frame rate, does not always mesh well with what’s meant to be extreme versions of the world we live in and the people we are.”

See the second trailer, as well as a talk with the director and cast from NYFF, along with a poster:

Update: See another new trailer below.

Director Ang Lee brings his extraordinary vision to Billy Lynn’s Long Halftime Walk, based on the widely-acclaimed, bestselling novel. The film is told from the point of view of 19-year-old private Billy Lynn (newcomer Joe Alwyn) who, along with his fellow soldiers in Bravo Squad, becomes a hero after a harrowing Iraq battle and is brought home temporarily for a victory tour. Through flashbacks, culminating at the spectacular halftime show of the Thanksgiving Day football game, the film reveals what really happened to the squad – contrasting the realities of the war with America’s perceptions. The film also stars Kristen Stewart, Chris Tucker, Garrett Hedlund, with Vin Diesel, and Steve Martin. Lee used new technology, shooting at an ultra-high frame rate for the first time in film history, to create an immersive digital experience helping him dramatize war in a way never seen before.