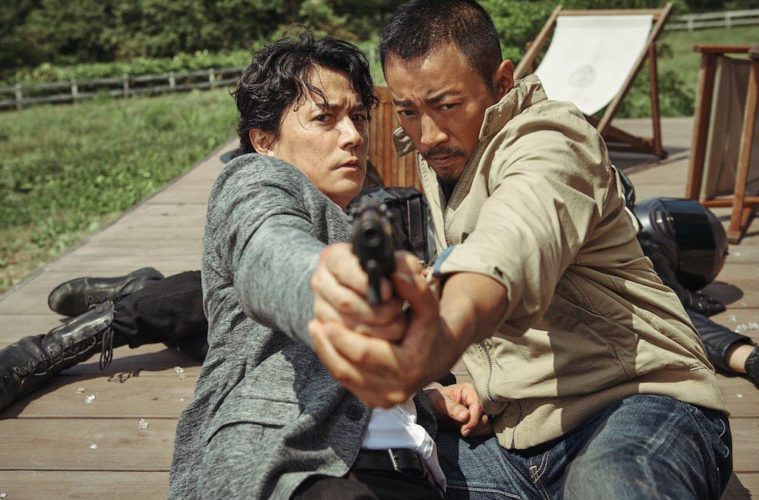 New to Streaming: ‘Manhunt,’ ‘Before We Vanish,’ ‘Game Night,’ and More

Note: New to Streaming will be taking a two-week break and will return on May 25. Enjoy the latest picks below, and in the meantime, check out our Cannes 2018 coverage here.

Social media discourse around The 15:17 to Paris has already positioned it as the first big cinematic culture war flashpoint of the year. But while liberal thinkpiecers and conservative fans alike will be able to find plenty of moments to thump their chests over, it doesn’t really feel as though director Clint Eastwood is aiming for any big statements about America or terrorism or what have you. That doesn’t mean any of them will necessarily be wrong for reading jingoism or affirmations of traditional values in the subtext or text. It’s just that, for example, characters are seen praying not as a dog whistle for Christian audiences but simply because that’s what their real-life selves would do. (And sure, it can be both, but it comes more matter of fact than pointed.) – Dan S. (full review)

Before We Vanish (Kiyoshi Kurosawa)

There are few directors who would choose to take a semi-sincere approach to a lengthy pseudo-philosophical science-fiction film — especially not one that lightly pries into our fundamental psychological foibles — but there are few directors quite like Kiyoshi Kurosawa. The prolific Japanese filmmaker behind such varied genre gems as Pulse and Tokyo Sonata has constructed a sort of skittish and overlong, albeit pleasantly existential oddity in Before We Vanish, an alien-invasion B-movie packed with A-grade ideas and craft. Nail down your windows. Lock your doors. It’s the invasion of the concept snatchers. – Rory O. (full review)

Robin Campillo’s account of what it was like to be a member of ACT UP in the 1990s epitomized why the personal is always political. His kind-hearted, unsentimental approach to the struggles of people living with HIV was equal parts brutal and inspiring. Nahuel Pérez Biscayart proved to be a revelation as a young activist living his life as if, literally, every day was his last. – Jose S.

Angela Schanelec’s The Dreamed Path is so beguiling that we, the audience, have to take comfort in pointing out its one clear structural point: it’s split into two halves, each about a different couple in separate time periods. Our first is Kenneth (Thorbjörn Björnsson) and Theres (Miriam Jakob), who we see arriving on vacation in Greece in 1984; the film is quick to divert our attention to a protest about the nation’s place in the European Union, and here already feeling the weight of democracy and mythology. A young, attractive couple (easily the film’s liveliest sequence is when they busk “In the Jungle”), circumstances suddenly drive them apart when Kenneth’s parents in England fall sick and Theres gets a teaching job back in Germany. – Ethan V. (full review)

A Hollywood comedy with genuine laughs and a semblance of directorial vision? Indeed, they still do exist as proved by John Francis Daley and Jonathan Goldstein’s Game Night, a bounce-back from their Vacation remake. With some heart at the center thanks to Jason Bateman and Rachel McAdams’ genuinely joyful marriage, not to mention thrills (and creeps, courtesy of a brilliant Jesse Plemons), this set the comedy bar high for the rest of the year when it comes to studio output. – Jordan R.

British filmmakers have a recent habit of bringing about canonical additions to UK queer cinema in their debuts. Andrew Haigh’s heartbreaking romance Weekend and Hong Khaou’s moving Lilting are now joined by Francis Lee’s God’s Own Country, a bold and brilliant drama rightfully garnering Brokeback Mountain comparisons out of its Sundance debut. Anchored by a quartet of heartfelt performances and tapping into zeitgeisty conflicts between working-class England and growing EU immigration, it’s hard to imagine a more bracingly open-hearted film coming out of Brexit Britain today. – Ed F.

The latest stage of Richard Linklater’s freewheeling career takes him back to the 1970s with Last Flag Flying, a 44-years-belated sequel to Hal Ashby’s masterpiece The Last Detail. It’s difficult to call much of anything from Linklater a surprise at this point: he seems as comfortable at the helm of a studio comedy powered by Jack Black’s manic energy as he does a decade-plus-spanning epic about the journey from childhood to adolescence. Last Flag Flying may not stand as one of Linklater’s defining works, but it does signal a kinship with the New Hollywood director, whose run from 1970-1979 was as inspired as any other from that era — before he got burned (and burned-out) and died too young at the age of 59. Ashby and Linklater have a shared ability to make a film built on discursive moments flow narratively, an affinity for counterculture movements or small communities that help define an era or place while being held outside of its mainstream, and a shared interest in people discovering themselves and finding some small measure of independence in circumstances that otherwise forbid it. – Max O. (full review)

Known for his intimately personal style of filmmaking and, often, drawing from his own experiences, there are always tugged emotional heartstrings that permeate the core of Hirokazu Koreeda’s films. With his latest title, Like Father, Like Son, the Japanese director drew from his experience of becoming a father to craft an intensely poignant film about parenthood. Oftentimes heart-wrenching, Koreeda is able to weave a range of emotions by remaining slightly detached and observing the subtle mannerisms of both families; with such great performances from both of the child actors, it’s near-impossible not be bowled over by their struggle to understand what’s happening. – Raffi A. (full review)

John Woo’s return to the genre that made his career isn’t so much of a comeback as it is watching one of our best action directors become unleashed. This is a film of superlatives, where storylines and subplots pile on top of each other in the middle of action setpieces that astound in their absurdity. There are cover-ups, conspiracies, badass assassins, jetski chases, revenge plots, super soldiers and much, much more, with Woo orchestrating all of his madness into a giddy delirium while giving viewers a big ol’ self-reflexive wink. One of the most purely entertaining films of 2017, Manhunt is the exact kind of maximalist fun we need right now. – C.J. P.

In the Intense Now
Half a Life
Ran
Night Tide
Unseen: The Eyes of Looking