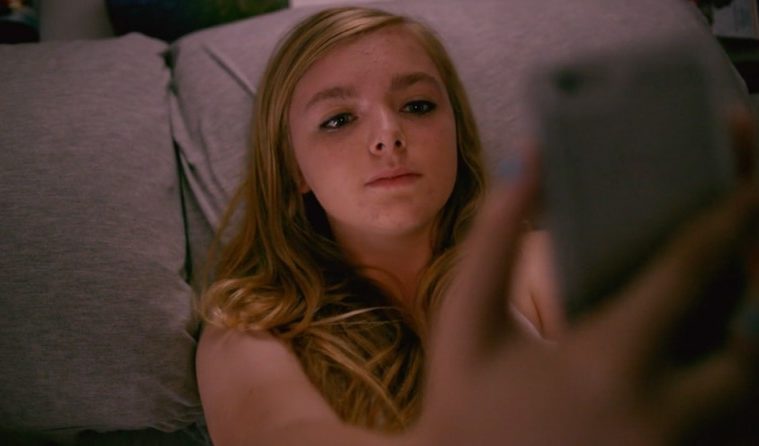 New to Streaming: ‘Eighth Grade,’ ‘Leave No Trace,’ ‘Hold the Dark,’ and More

If comedy is best pulled from trauma, there are few moments in one’s life more distressingly rich to mine from than middle school. Comedian-turned-director Bo Burnham, now more than a decade removed for proper reflection, depicts the specific time period with all the spot-on crippling anxiety and all-consuming awkwardness in his modest but affecting directorial debut Eighth Grade. – Jordan R. (full review)

Gemini is also a fantastic neo-noir set in the Thief-inspired Los Angeles of Drive, an upside-down city, as captured in the surrealistic opening credits by cinematographer Andrew Reed, where morals have all but vanished, leaving behind only a group of ghostly beings trapped in the limbo of their crushed dreams and dissatisfaction. (James Ransone’s paparazzo is especially wonderful.) We wonder, for example, why the intelligent, perceptive Jill wound up as the personal assistant / henchwoman of spoiled movie star Heather Anderson (Zoë Kravitz) who uses her to conduct dirty work under the pretense of being more than her employee, but also her “best friend.” – Jose S. (full review)

With Hold the Dark, Saulnier widens his canvas in exciting ways, tackling his first adaptation and embracing a unique narrative propulsion seldom found in genre cinema. Melding elements from a number of genres, Saulnier creates his most dense work yet in a film all about dichotomies–in codes of life, men and nature, knowing and unknowing. These differences lead to conflict, and perhaps, truth. The awkward and savage nature of the characters always found in his films are now contrasted with an ominous mysticism and otherworldliness, effectively evolving his thematic concerns and, by extension, his lexis. – Mike M. (full interview)

Early scenes of Leave No Trace feel like The Road. Not the movie adaptation, but Cormac McCarthy’s book, which evokes familial intimacy to an almost harrowing degree. Then they set out along the blacktop in the gunmetal light, shuffling through the ash, each the other’s world entire. In setting, this is that story’s pre-apocalyptic mirror, with a father and daughter living in the woods instead of a father and son wandering a wasteland. Here there is good earth instead of ash and striking greenery instead of gunmetal, and the lead characters have willingly separated themselves from civilization instead of being violently torn from it. But the central parent-child bond is of the same species, and the movie’s quiet study of it delivers similar heartbreak. – John F. (full review)

By the time he was 25, Lee Alexander McQueen had gone on to launch his own fashion label. Before he was 30, he had designed costumes for David Bowie and Björk. By age 31, Gucci had acquired his company naming him artistic director and expanding his empire to include flagship stores all over the world. His success, in more than one way, defied Great Britain’s antiquated but prevalent class system; for how could a gay man born to a teacher and a Scottish taxi driver ascend to the highest levels of society? Rather than sticking to a traditional (i.e. fairy tale-esque) rags-to-riches narrative, in McQueen directors Ian Bonhôte and Peter Ettedgui explore the ways in which the designer constantly rebelled against the establishment and still managed to become one of the most celebrated figures of his time. – Jose S. (full review)

Guillermo del Toro’s Shape of Water is the elegant love story he was born to make. It is obviously his best film since Pan’s Labyrinth, but one can go further: Shape is his finest effort to date. Consider the swoon-worthy look of it all, from the design of the amphibious creature to the sight of a grinning Sally Hawkins on her nightly bus journey. Consider, too, the performances of Hawkins, Doug Jones, Richard Jenkins, Octavia Spencer, Michael Shannon, and Michael Stuhlbarg. On paper, the plot — mute custodian falls for the aforementioned imprisoned creature during the Cold War — sounds stale and B-movie-ish. In del Toro’s hands, it is magical. Moment to moment, scene for scene, The Shape of Water is a glorious creation. Here is a film that reminds us why we so adore cinema in the first place. A remarkable achievement in all respects. – Chris S.

A Wrinkle in Time

The Island of St. Matthews
Automatic At Sea
Timber Gang
Ghost Town
The Things of Life
Raising Victor Vargas
Love on a Pillow