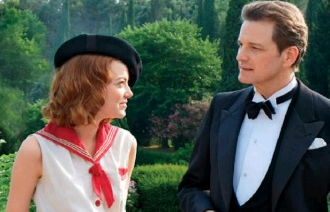 With the Cannes line-up just a day away, some have pegged Woody Allen‘s Magic in the Moonlight as one of the potential premieres, but considering Blue Jasmine skipped major festivals and hit theaters to become one of the director’s most successful films, we wouldn’t be surprised if he went the same route this year. Led by Colin Firth and Emma Stone, we got a brief synopsis earlier this year for the France-set romantic tale taking place in the 20s and 30s, but now some additional details have arrived. “I had it on a piece of notepaper in my drawer for ages,” Allen tells EW in their latest issue. “I knew it was a good plot, but I kept seeing it as a contemporary thing and something about that just didn’t smell right to me. Then when it occurred to me it could be set in the south of France in the 1920s, all of a sudden it just felt good.” The exact story is said to zero in on Firth as an Englishman “who sets out to expose a phoney mystic (Stone), only to end up falling for her.”

With a 28-year age difference in real-life, the romance is a bit odd, but we suppose it’s familiar territory for the director. As for one of their supporters, Marcia Gay Harden, she’ll be playing Stone’s mother, who works with her as a swindler. When it comes to Allen’s recent fascination working outside of America, he says, “By sheer accident because I was getting European financing. I’ve wound up being a foreign filmmaker.”

One of our most-anticipated of the summer, Magic in the Moonlight is confirmed for a July 25th release via Sony Pictures Classics and a new still can be seen above to the right. [via Woody Allen Pages] What do you think of the new plot details?