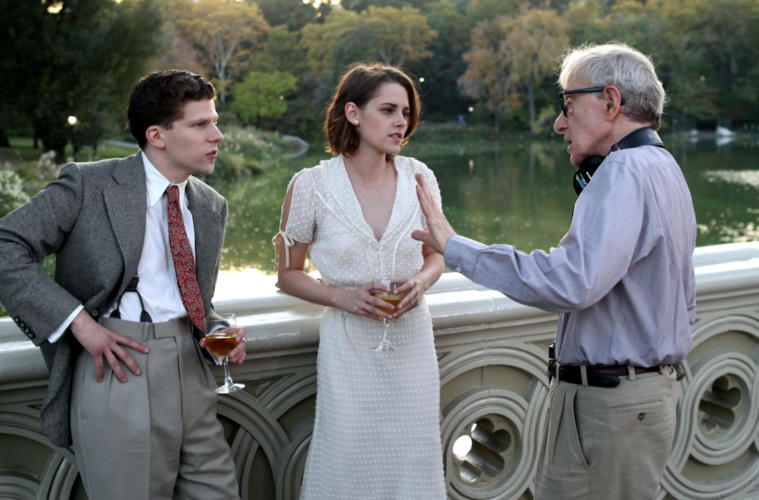 Not only is Woody Allen already shooting his TV show for Amazon, but he’s gearing up for a likely Cannes premiere of his next feature, also picked up by Amazon (marking his first film in some time not released by Sony Pictures Classics). Starring Jesse Eisenberg, Kristen Stewart, Steve Carell, Parker Posey, Blake Lively, Corey Stoll, Paul Schneider, and Judy Davis, it was recently revealed to have a title of Cafe Society, and now we’re getting new plot details.

“This is a New York love story in the ’30s,” Page Six reported last year. “The movie’s about reliving an old romance. She eventually married his boss. But as passion’s rekindled they schlep about in a horse carriage and sip wine. Now, in a new interview with legendary cinematographer Vittorio Storaro from CineAlta (via Woody Allen Pages), he adds, “This movie is about a Jewish family that lives in New York. One member of the family goes to Los Angeles to be a film agent, so the story goes back and forth between the Bronx in 1935 and Hollywood in 1935-40. ”

When asked about why he decided to take on a movie from Woody Allen, the Apocalypse Now DP said, “Usually the best collaboration, at least for me, is when you capture a very inner concept from the director. It becomes a dream project for the director, and that dream becomes your dream.” He adds, “At the beginning we made it very clear the fact that the way that he was thinking the visualization of the picture could be was exactly the way I was already reading the script. I spent two hours with Woody speaking about he vision for the film, and I had prepared myself with three different styles – the Bronx, Hollywood, and the character’s return to New York, when he’s participating in a higher social level, with dinners in tuxedos.”

Talking about Woody Allen’s own potential narration in the film, the cinematography said, “First of all, I loved the fact that this is really a Woody Allen movie in the sense that he’s the narrator. I recognized his personality in it. He is deciding if it will actually be his voice doing the narration, and I hope it will. With narration, we can be more free, in some ways, in telling the story. With a narrator, you lose contact with reality, and the world is a paint picture, which can require some kind of visual reference in connection with the social, political, artistic period of the film. That[‘s] something I usually like. It can give me several approaches. That period in Hollywood is very interesting, in the sense that you can have a lot of reference from photography, from painting, and from the German influence at that time. And between the two worlds, there are some opposites, and some similarities. I always like that kind of dialogue and balance between opposite elements.”

As for Woody Allen’s thoughts on going digital? “For the moment, it looks like he’s very happy,” Storaro concludes. For more from the cinematographer, check out our recent interview with him from last fall.

Cafe Society will be released later this year.