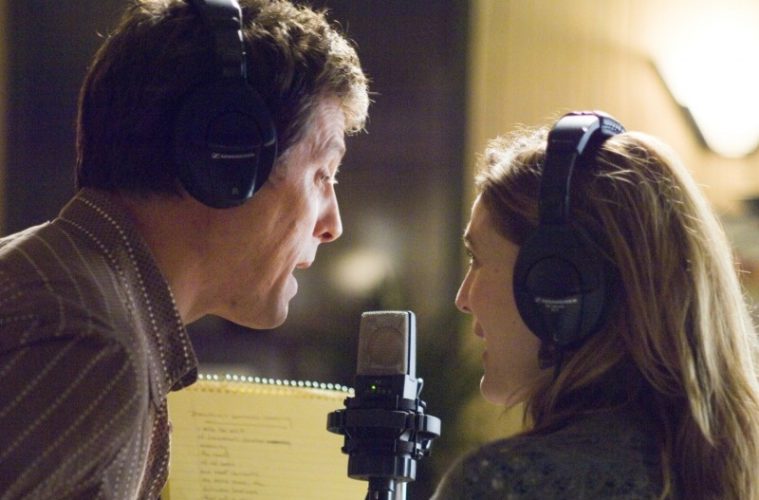 ‘Music and Lyrics’: Sweet Dreams are Made of This

In many ways, Marc Lawrence’s 2007 rom-com Music and Lyrics begins like a fever dream. Not only does Hugh Grant suddenly appear onscreen with a sky-reaching hairdo, he’s also singing to the camera and wearing tight trousers. Soon, a similarly clad and always charming Scott Porter, of Friday Night Lights fame, joins him and also gets vocal. It is 1984 and, together, they are Pop!, the band whose hit “Pop Goes My Heart” had a video to match its greatness. Making faces straight out of a silent movie to portray Grant’s heartbreak (or heart-popping), the duo evolves through a scenario that involves a dizzying black-and-white room, a hospital, and choreography centered on their crotches and behinds. Like Frankie Goes to Hollywood’s “Relax” sequence in Brian De Palma’s Body Double (also 1984), this music-video-within-a-movie captures the exhilarating, not-always-convincing liberated spirit of the 1980s with humor and devotion. The psychosexual obsessions of Body Double are, however, dismissed for a much more palatable and whimsical sentimentalism.

But the dream soon comes crashing down. An aggressive voiceover relates the duo’s history since: one day, Colin Thompson (Porter) decided to go solo and became an even bigger star, leaving Alex Fletcher (Grant) to drown his sorrow in drugs and alcohol. As if that weren’t bad enough, Alex now finds himself offered the opportunity to appear on television in an actual, physical “Battle of the 80s Has-Beens.” Yet this violent cocktail of nostalgia, shaming, and exploitation nonplusses Alex. Or at least he can joke about the term “has-been”: “It’s a very clear statement: ‘I live in the past. Everything good I ever did was long ago. Don’t expect anything new or exciting from me now.’ Really takes the pressure off. Especially on a first date!” Failure and near-bankruptcy have made Alex deeply sarcastic and less picky about his image. With acid humor, he convinces himself that the dream of earnest sensitivity sold by his old Pop! video was only a naïve fantasy, and hides his pain to others and himself.

But Lawrence’s decision to open with such a joyful homage to ’80s pop already suggests that Alex’s cynicism isn’t the writer-director’s. As surprising as the music video bursting on the screen for Music and Lyrics‘ opening sequence is a woman entering Alex’s life and offering a breath of fresh, hope-filled air. When he gets a shot at coming back on the music scene by writing a song for the sensuous but juvenile, pseudo-spiritual starlet Cora (Haley Bennett), Alex unexpectedly finds in his plant lady Sophie Fisher (Drew Barrymore), a gifted lyricist. The very fact that Sophie charitably accepts to help him should be a sign that all isn’t about greed and self-interest in life, but it will take Alex more than that to pierce the thick skin he’s grown through years of disillusionment.

Sophie’s tornado-like attitude isn’t a simple personality trait or plot device to contrast with Alex’s taciturnity; it takes a moment of vulnerability for her to reveal what lies behind her manic behavior and chronic lack of confidence. A bestselling novel in a bookstore window brings back memories of her ex-lover, an esteemed writer and professor who broke her heart and parodied their story in that very book. Rather than losing patience and worrying about his song, Alex listens carefully to Sophie. Just as she helps him write and encourages him to sing whatever he wants to sing, he tells her that she’s too talented and wonderful to care about this ex’s opinion of her.

The fact that both Alex and Sophie are perpetually struggling against a feeling of inadequacy gives Music and Lyrics a strange, deeply enjoyable realism. Their attempts to be socially acceptable versions of themselves results in extreme self-deprecation in Alex and a frenzied behavior in Sophie. The sense of awkward panic that taints their interactions with each other and the world is, of course, funny, but also keeps them down to earth and close to the audience, despite their rather unusual story.

Indeed, depicting the creative process via cinema is a high-wire act for several reasons. An artist can easily seem self-involved, when in fact creativity is often motivated by a genuine desire to open up to others and a willingness to make oneself vulnerable. While Alex and Sophie do successfully express their feelings through their song “Way Back Into Love,” Lawrence’s brilliant script avoids all potentially pretentious self-congratulatory moments for them. It’s not only that Alex’s cynicism regarding the music industry and Sophie’s lack of self-confidence imply that neither wants to praise their own efforts too loudly; it’s also that the race-against-time structure of this story leaves them no time to enjoy their success. Every line they manage to write is a small victory, but there are so many more to compose before Cora’s short deadline. The duo is making art but can’t afford to look cool doing it, instead remaining endearingly focussed on the task at hand.

The other dimension that’s challenging to depict is inspiration. How an artist gets ideas can rarely be explained without dumbing down this ever-elusive process. Some directors are literal about the magic of creativity: in Begin Again, John Carney chose a montage of instruments coming alive to represent Dan (Mark Ruffalo) thinking about a melody, thus making songwriting seem detached from its musician — not to mention whimsy. Music and Lyrics — a title already revelatory of a more humble approach than the cutesy Begin Again — shows Alex successively playing each musical part of the song himself, using simple melodies, loop machines, and computers. Rather than artificially adding a dose of fantasy to elevate pop music, Lawrence understands that its power to move listeners lies in its very simplicity and cheesiness. He highlights the easy bliss that Alex’s music brings to people at every concert the singer gives, big or small, for the hyper-excited middle-aged female spectators are never ridiculed. As Sophie points out, their glee is beautiful and something to be proud of.

Naturally, the aptly titled “Way Back Into Love” brings happiness to its makers, too. In taking breaks from songwriting to talk about their experiences, Alex and Sophie start detaching from their self-hatred by first putting it into words, then music and lyrics. Their dedication to their song leads to their devotion to each other and a realization that they are worthy of affection — but most importantly, of self-love. The dream of simple pleasures as presented by Pop! and pop music seems believable again.