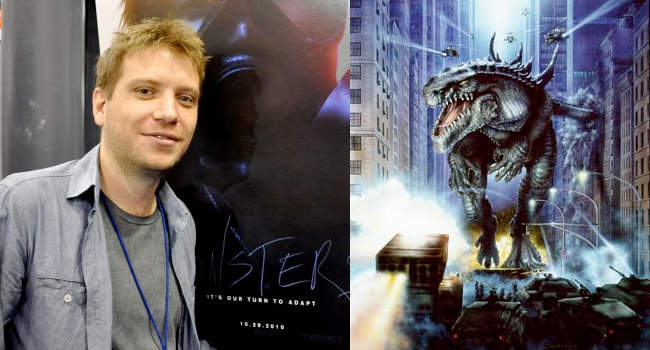 When I interviewed Gareth Edwards, director of one of the most impressive low-budget films of the year, Monsters, he wouldn’t say much about his next project. Referring to a planned sci-fi project with Wanted helmer Timur Bekmambetov, he said he wanted to maintain the creative freedom he had on Monsters, but on a bigger budget scale. Before he dives into that project, he is closing a deal on a new entry into a major franchise.

THR is reporting that Edwards, will develop and direct the new Godzilla movie for Legendary Pictures, who were behind such hits as Inception and The Dark Knight. Back in March 2010 we reported that the company had grabbed the rights from and only that a 2010 release was planned. Japan’s Toho Co. in March 2010.

For those that admired the visual style over the script in Gareth Edward’s Monsters, they will be happy to hear he will be working with a yet-to-be-hired writer. Producer Brian Rogers also gave some details last fall on the film saying it will be in 3D and in IMAX. Godzilla will also be fighting other monsters this time around. It was also mentioned that this may be a complete reboot, thankfully ignoring Roland Emmerich‘s version. As for Edwards, I don’t think they could have made a better choice. I loved Cloverfield, and he would be my top choice to deliver another monster film of that caliber.

Did you see Monsters? Are you excited to see Edwards helming Godzilla?