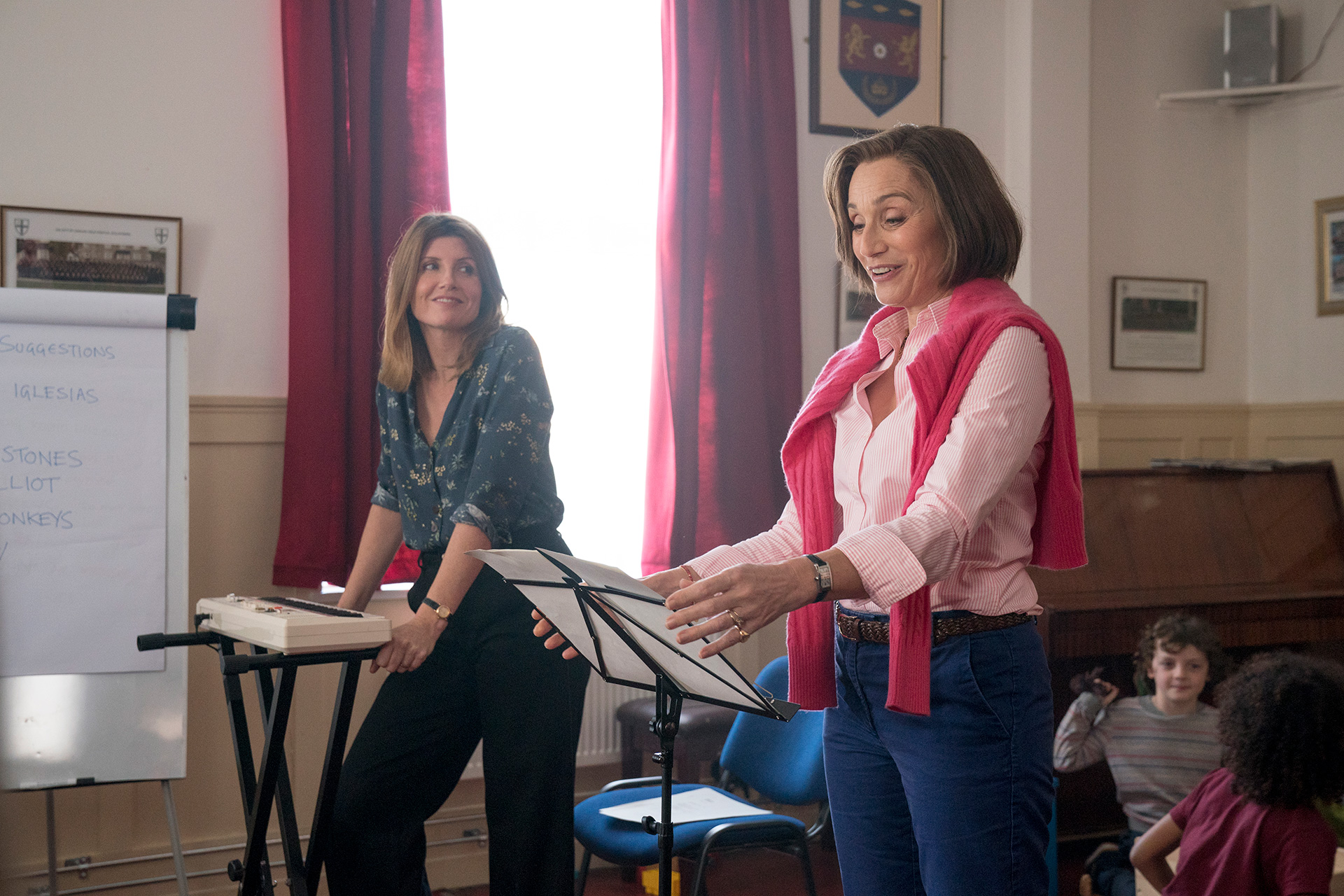 Deployment day has arrived for the Flitcroft barracks. The soldiers are off to Afghanistan for a six-month stint while their spouses are left behind to raise families and attempt to stay sane. In a bid to help distract from the unavoidable worry, group activities are commonly brainstormed and executed for anyone interested in joining. And being the military, it should be no surprise that a rank-and-file hierarchy is adopted on that front too regardless of whether those forced into authority positions actually want them. As wife to the senior officer, Kate (Kristin Scott Thomas) always had. She enjoys the power it affords and the divisionary routine. With the recent promotion of Lisa’s (Sharon Horgan) husband, however, the duty now falls into her less regimented and more free-spirited hands.

The result is a reluctant partnership at the top of a group of women comprised of those who’ve both experienced this all before and those who’ve just arrived. Lisa would rather take a laissez-faire approach to her de facto leadership, but Kate can’t abide such lack of control. While it’s therefore new school versus old on the simplest of levels considering their inherent generational taste gap, things quickly prove more complex once we’re able to consider the origins of these personality differences via context. Kate ultimately needs the distraction because all she’d be doing otherwise is thinking about her husband’s (Greg Wise’s Richard) safety. Lisa doesn’t. She conversely packs Red (Robbie Gee) away in the hopes that his complete absence today will render his potential death tomorrow easier.

It’s an odd couple pairing ripe for comedy and drama thanks to the environment in which these spouses exist as helpless bystanders to a war they can’t afford to protest (an intriguing wrinkle that’s sadly ignored outside of a single throwaway line). Because screenwriters Rosanne Flynn and Rachel Tunnard know the weight of such realities will permeate the subject regardless, they’ve done their best to create Military Wives as its own feel-good distraction from the tragic inevitabilities that must be included to retain veracity, meaning, and respect for these too-often forgotten war-time players. Just because the formation of military wives’ choirs throughout England was steeped in adversity doesn’t mean their effect isn’t inspiring, hopeful, and fun. This story becomes a beam of light in the darkness.

And who’s better suited to bring it to life than the director of The Full Monty—another common folks thrust into an impossible spotlight tale of overcoming fears and unfortunate circumstances to conjure an optimistic smile? This is Peter Cattaneo’s first theatrical film (COVID-19 unfortunately scrapped those plans en route to a VOD release) in over a decade and he supplies it a similar sensibility to that crowd-pleasing debut thanks to no shortage of things to laugh about. From Kate and Lisa’s relationship being compared to a marriage on the verge of divorce to this “singing club’s” most confident singer (Lara Rossi’s Ruby) being its worst and least confident singer (Gaby French’s Jess) being its best, the constant tug-of-war between enjoyment and improvement is never done.

If I had a complaint, however, it’s that there might be too many moving parts for the plot to carry the same impact as its characters. As we learn more and more about the women themselves, the circumstances surrounding them evolve as though they’re on a very regimented timeline that cannot be altered despite the heaviness of their lives. Just when we’re starting to understand the dynamic between Lisa and her teenage daughter Frankie (India Ria Amarteifio), things progress in ways that usurp their emotional poignancy for narrative fireworks. The same goes with Kate and the knowledge that this is the first deployment she’s been a part of since losing her son in battle. The script sometimes feels as though it introduces this drama simply to exploit it.

The same goes with first-time military wife Sarah (Amy James-Kelly). While it appears as though we spend time with her to show the compassion Kate can provide outside of her more public image of fortitude, the fact that we don’t spend time with any of the other women save brief expository vignettes all but guarantees that her story will be hijacked to serve the bigger picture. Despite the performances being very effective and melodramatic beats authentically impactful, it’s hard not to be taken out of the moment when these strings are so blatantly pulled to remind us that the choir’s saga is more important to the film than the individuals singing. It’s an unfortunate imbalance considering our investment in them is actually much greater than their forthcoming concert.

Credit the actors for allowing the whole to work anyway. As the script tries to make us care about Captain Crooks’ (Jason Flemyng) enthusiasm and Brigadier Groves’ (Colin Mace) opportunistic desire to use the choir as a means of propping himself up for his superiors, we do our best to remember these two are merely facilitating the trajectory these women take towards a better understanding or who they are and what they can accomplish outside of their spouses’ shadows. The prospect of an out-of-left-field televised performance shouldn’t outshine Kate and Lisa’s realization of what the other has to offer beyond their contrasting musical talents. Thomas and Horgan beautifully ensure that this story remains about grief’s many forms: past, present, and potential. Success is no match for catharsis.

Military Wives releases on VOD and Hulu this Friday, May 22.