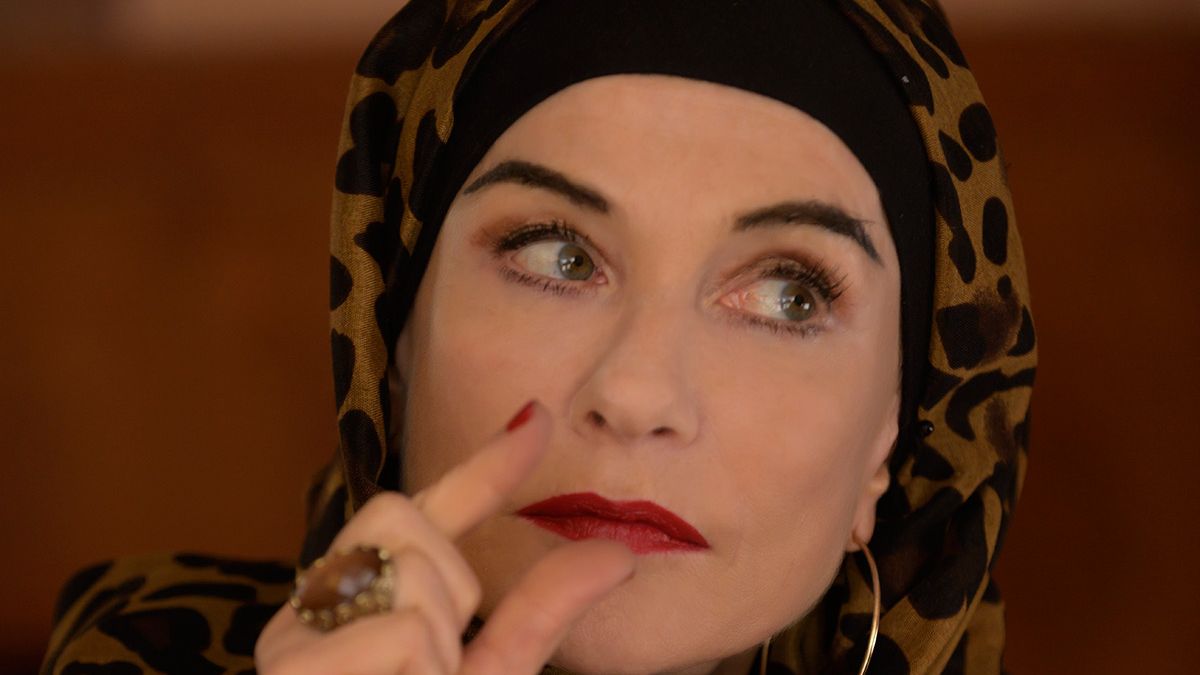 There’s something off about Mama Weed. On a more superfluous level, there’s the translation from La daronne—the original French title and the street name its protagonist comes to earn, itself an informal term for “mother”—to the title and nickname used in its United States release. Textually, problems emerge from the myriad supporting characters, virtually all of whom play like narrative props. The script seems uninterested in its conflict; the filmmaking lacks the style to glue its pieces together. That shines a light on, and strands, our title character.

She’s Patience (Isabelle Huppert), an Arabic-fluent French translator working for the police’s narcotics unit. At first, she’s humble: a woman proficient in her professional life but underpaid, a widow and mother to two daughters (Iris Bry and Rebecca Marder). She’s behind on her rent and hopes to afford her own mother (Liliane Rovère) better assisted-living care but is up to her neck in a case involving Moroccan marijuana dealers. Things soon shift: she becomes a drug lord. At its core, Mama Weed is about class, xenophobia, and the police state. In execution, though, it’s not. For all the schisms it’s actually about, Jean-Paul Salomé’s film either doesn’t care about or isn’t aware of what it depicts.

Maybe some of that has to do with its shifts relying on contrivance. Early on Patience learns her mom’s favorite nurse (Farida Ouchani) would have been implicated in a prospective drug bust, as the cops have a target on her son’s (Yasin Houicha) back. Around this time, Patience adopts a newly retired police dog; then she nicks a ton of pot to sell herself. Its plot progressions all seem better suited for farce, but their implications, and how Mama Weed claims to focus on them, signify something different. As is, the first big fumble is how Patience’s implied criminal past and quasi-relationship with her boss (Hippolyte Girardot) are relegated to blink-and-you-miss-it exposition.

Salomé—who co-wrote the film with the source novel’s author, Hannelore Cayre—lacks the capacity to tie these beats together. The script approaches character growth as if crafting a variety of sketches. In theory that could have worked—had Salomé directed the picture in a way that complements how skeletal parts of it are on paper. Instead he does it with a distance, but not ironic; he’s simply detached from what he depicts, plastering the script onto the screen without adapting it visually or aurally. Early scenes of Patience at work border on parody and fittingly so, but Salomé’s filmmaking lacks the verve it needs to accrue its own sense of context.

Instead we get Huppert doing typically solid work, but she does well with what Salomé and Cayre give her rather than elevating the material. Granted, the material isn’t that good. When Patience becomes Mama Weed (or La Daronne, as the characters actually say), her version of going incognito is wearing a rotating selection of hijabs. (The casting doesn’t help either, given that the character is meant to be part-Algerian.) As she works with two dealers who are on the narcotics unit’s radar (Rachid Guellaz and Mourad Boudaoud), she really exploits them, something about which this movie doesn’t even bother plumbing the mechanics.

Tension ostensibly rises later. But beyond that, Mama Weed cements its biggest issue. No one here, from family to friends to foes to officials, matters. Patience’s mother isn’t a particularly inspired motivation nor one we spend enough time with. Her daughters cease to exist when they aren’t onscreen, which isn’t often. Her neighbor Colette (Jade-Nadja Nguyen), whom Patience refers to as “me, but Chinese,” isn’t even that given how superfluous she is. Even aside from the glib racial and economic politics, it’s impossible to see anyone as anything but a pawn to move along what either way feels like an incomplete plot.

That said, it’s not like the end result is offensive. It’s too banal for that, and it’s definitely too technically and narratively slight to garner a strong reaction in any direction. This isn’t to insist that Mama Weed should have been strictly comedic or gone gritty, but it should have at least tried to assemble its pieces. Between this setup and this star, the least it could do is feel complete.