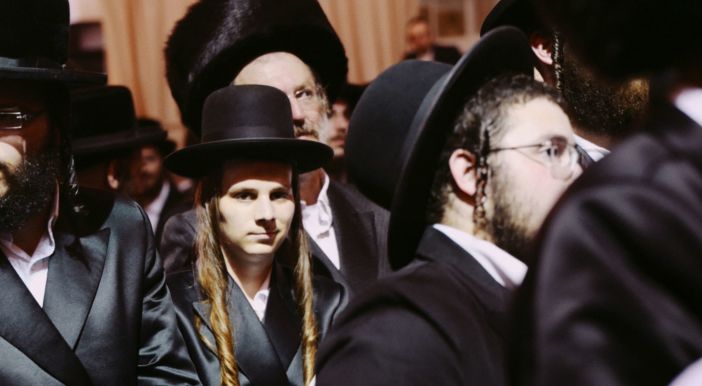 Locarno Review: Yolande Zauberman’s ‘M’ is a Piercing Look into an Unspeakable Tragedy

“I was a singer,” 35-year-old Menahem Lang introduces himself at the outset of Yolande Zauberman’s piercing documentary M, “and then I became a porno kid.” A seminal addition to the growing body of works focusing on religious fundamentalism among ultra-Orthodox Jews (recall Joshua Z. Weinstein’s wondrous drama and 2017 Sundance charmer Menashe, which followed a Hasidic widower struggling to keep custody of his child, or Heidi Ewing and Rachel Grady’s Netflix documentary One Of Us), M follows Menahem as he drives around Bnei Brak – Israel’s ultra-orthodox hub, a city located just few miles off Tel Aviv – and grapples with the memory of the countless rapes he suffered as a kid by the hands of Orthodox Jews living therein.

A bald man with piercing blue eyes and a volcanic, uber-loquacious persona, Menahem is a force of nature, and if M keeps one on the edge of the seat for several of its chats-filled 105 minutes, credit goes largely to its protagonist’s jaw-dropping stage presence. To be sure, Zauberman does warn early on that her lead is no ordinary man. Blessed with a remarkable voice – of which we are given a taste all throughout the documentary – Menahem made a name for himself as a brilliant Talmud student and talented liturgical singer, before breaking away from the ultra-Orthodox community and abandoning the native Bnei Brak in his early twenties to begin fighting to bring his rapists to justice. Indeed, the project undertaken with Zauberman is not the first time the 35-year-old has tried to shed light on the revoltingly tight-lipped attitude toward the abuses committed – and never denounced – inside his community. Armed with a hidden camera, Menahem once sat with one of his rapists, recorded his confession, and shared the video with news outlets, stirring a hornet’s nest among fellow Orthodox Jews.

It’s a pity Zauberman does not to show footage of Menahem’s brilliant undercover work (or a glimpse of his acting stint in Amos Gitai’s Kedma, which we are only told about), but there’s no questioning the man’s magnetism, and his ability to keep the audience engaged all throughout his journey. The video Menahem circulated with the press cast him as anathema to the Bnei Brak’s community, so there’s a constant tension in the Taxi Driver-like night tours he takes around the city – an uneasiness that peaks when Zauberman films him knocking at one of his rapists’ door. And there are places when Menahem just can’t enter, leaving the director to film by herself. “You can go into the synagogue,” Menahem says as he looks straight into the camera, a fourth-wall crumbling shot that makes it eerily ambiguous whether the invitation is addressed to the director or the viewer, “but I can’t. That’s where I got raped: I’m too ashamed to get in.”

“He’s become filled with rage again,” Zauberman remarks as she films him at the wheel of his car, heading into Bnei Brak. But it is hard to imagine Menahem’s anger could ever veer into revenge. Far from seeking a personal vendetta, the man looks more concerned with finding an answer to the two ever begging questions: why did these crimes happen? And why did the adult members of an ultra-Orthodox community allow them to go unpunished?

Ostensibly a one man’s portrait, M is paved with several serendipitous encounters that underscore just how terrifyingly large the scope of Menahem’s suffering really is. Zauberman trails behind her protagonist as he walks around Bnei Brak and candidly shares his horrific past with a few strangers he stops to talk to. Admittedly, his horrific anecdotes are received with empathy and support: all the Orthodox Jews Menahem opens up to encourage him to bring the rapists to the authorities (not that that would ever amount to much, as we are constantly reminded). Yet, more chillingly still, nearly all of them have also suffered rapes by the hands of other fellow Orthodox Bnei Brak residents.

That’s what makes M such an imperative watch: the abuses suffered by Menahem are so widespread the men who lived through them speak about their childhood traumas with a horrifyingly nonchalant, matter-of-fact attitude – as if the rapes against minors had turned into a revoltingly diffused but seldom spoken rite of passage.

Partly because the Bnei Brak community has shushed the whole epidemic as a taboo, there is something profoundly liberating in Menahem’s accounts. But while Zauberman is certainly right in underlying, through her own voiceover, that Menahem’s stories have a positive spillover effect in allowing others to share and overcome their own traumas, the way she comments on his journey into Bnei Brak – and reflects on her own role in helping Menahem carry out his mission – has an annoying self-aggrandizing aftertaste. “Next to Menahem I move my camera like the Magic Flute,” she notes, as more people gather to attend his late-night rendezvous and discuss their abuses, “and others come toward us.” It is not the only cringe-worthy remark she utters along the journey. Early on, she comments on the “child-like looks” she sees on the eyes of all rape victims, and by the time M comes to an end, she bookends it with a play on a quote by Kafka, calling her movie a knife to both protect and attack her people.

There is no denying that what Zauberman has achieved in M is a terrific feat. For one thing, the fact that a woman was able to break into a water-tight community to document such a deeply personal tragedy is a miracle in and of itself. But the scattered moments in which she pauses to remind the viewer of just how pivotal her presence is in the context of Menahem’s fight for justice do little to add to M’s tension. If anything, they subtract from it, standing out as fairly tactless reminders that behind Menahem’s powerful voice is someone who allowed him to speak up.

Thankfully, Menahem is quick to step in and lead the way. If M opens up with Zauberman instigating her protagonist’s confessions, by the time the 35-year-old returns to his hometown he is the one interviewing other victims, with Zauberman filming him as he moderates the confessions. There are moments when M hits a relatively more light-hearted terrain, as when one of Menahem’s interviewees and fellow victim confesses his sheer ignorance on all things sex (“can two girls ever do it together?”). There are others when Zauberman captures some truly heart-wrenching moments, culminating in Menahem’s heart-to-heart with his brother and parents, and the sheer scale of the community’s malaise becomes terrifyingly clearer. At a moment in film history when the eyes of the outside world are only just beginning to peer into a community as insular and secretive as Menahem’s, Zauberman’s M is a much-needed addition – a case of combative filmmaking resolutely committed to truth.