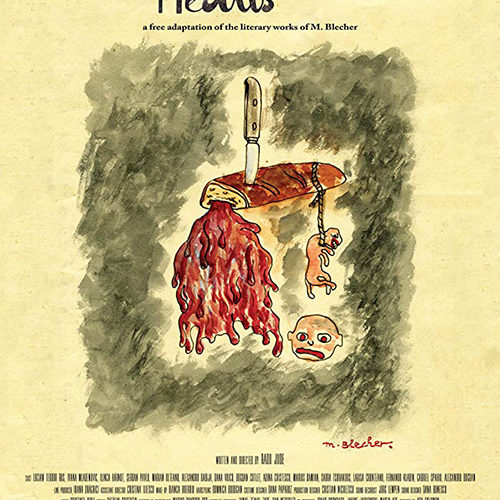 Beginning in 1937 — the opening credits take us through a series of period photos and alert us to expect something with a potentially greater scope than simply the biopic of one man — Scarred Hearts is still inspired by the life of one figure: writer and intellectual Max Blecher, in the case of this film reconfigured as Emanuel (Lucius Rus), suffering from bone tuberculosis and put in a hospital on the edge of the Black Sea. A 20-year-old man with his life ahead of him, there’s the belief within him that this is all to pass, though, as history will attest, that’s unfortunately not true.

Like another two-and-a-half-hour Romanian dry comedy about the medical process, Cristi Puiu’s The Death of Mr. Lazarescu, Scarred Hearts plays up the control doctors hold over us in a critical state for maximum absurdity, of course the joke of antiquated health care emphasized in director Radu Jude’s case. While we’re not necessarily supposed to laugh at his state, be it the “statue” he gradually becomes as a restrictive plaster is applied to his body, we’re not encouraged to participate in a pity party, either. Jude definitely plays with a complicated form of black humor: a shot held where puss is drained from his abscess, the camera holding onto Emanuel’s face as he screams in bloody pain, only to end with the punchline of the doctor dangling the goo in front of him. This is further evident in a sex scene with the leg-brace-wearing Solanage (Ivana Mladenovic) that almost tops David Cronenberg’s Crash in discomfort, such as when she complains about his plaster rubbing painfully against her stomach.

From there, we should be a little wary of the synopsis included to sell this film, which states that, in his condition, Emanuel still finds “life to be lived to the fullest” — a cornball statement if there ever was one. Over its lengthy runtime there’s the looming specter of WWII (a fellow patient does their best impression of Hitler), giving an inclination to the film portraying Emanuel as a symbol of a nation’s best lost to time, less as an elegy for his life than a forgotten intellectual tradition.

Perhaps this writer wants to compare Scarred Hearts favorably against an inspirational Oscar film about a disabled artist, e.g. My Left Foot. Jude resists a typical structure of uplift, even if, by turns, portraying Emanuel as a Great Man by placing such importance on his work, with pieces of his writing sprinkled throughout as if the intertitles in a silent film. The excerpts, be it his body feeling as if were glued together or his existence just an atom in the vast sea, often switch between first- and third-person perspective.

With a lead almost constantly in stasis, the average shot length expectedly goes long, though perhaps the classical motivation makes it not as noticeably “festival”-approved. Yet it also comes as another festival film that forces this writer to think of Lisandro Alonso’s Jauja — more in terms of form, be it the rounded corners of the 1.33 frame and its filmic texture. It features a bevy of vertical compositions that favor both the setting of the hospital rooms and the occasional ventures outdoors, one gorgeous shot of a moving carriage dwarfed by the dusk sky seemingly out of King Vidor’s Duel in the Sun. Scarred Hearts achieves a poetic dimension more through its formalism than its subject.