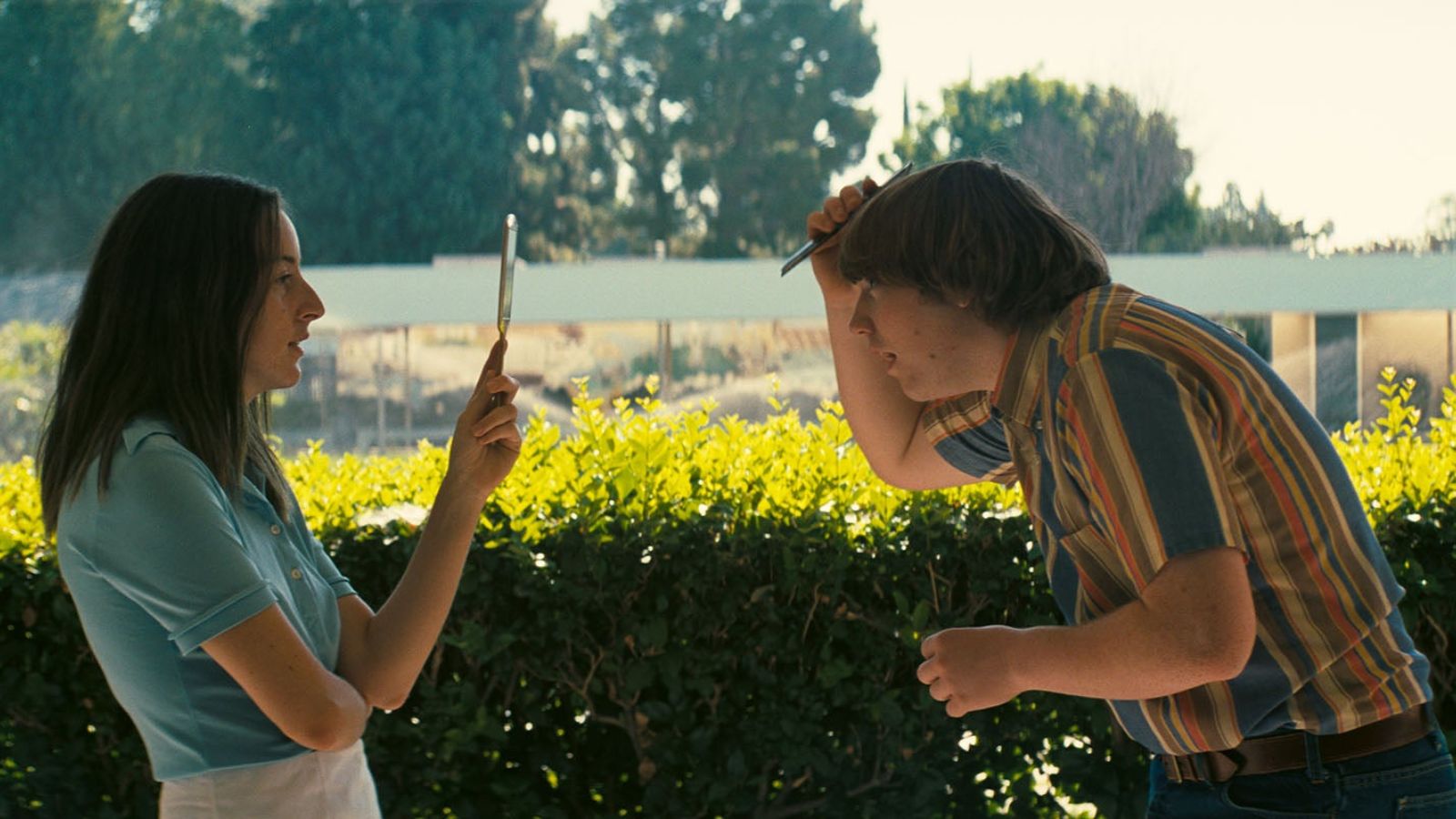 Paul Thomas Anderson has always been fascinated with pretenders, with people who use their assumed gigs and personas as a shield for their own deep insecurities. From Tom Cruise’s alpha guru in Magnolia to Philip Seymour Hoffman’s blustering mystic in The Master, Josh Brolin’s cop in Inherent Vice to Paul Dano’s preacher in There Will Be Blood, these characters that circle and attempt to entrap Anderson’s putative protagonists often end up the most fascinating elements, teasing out a canniness and resourcefulness that resonates with his view of American self-actualization.

That recurring use of hucksters ascends to the level of text with Licorice Pizza, which returns to the sunny San Fernando Valley setting from the first half of his career. Set in 1973, the story follows Gary Valentine (Cooper Hoffman, the son of Anderson’s deceased muse), a 15-year-old child actor and voracious entrepreneur, and Alana Kane (Alana Haim), a prospectless 25-year-old who transfixes Gary when he first sees her in line for high school photos. After immediately proclaiming his affection for her—which she quickly turns down for obvious reasons—Gary nevertheless forges a friendship with Alana, and together they embark on a series of highs and lows in both their personal and professional interactions. Gary, whose acting prospects are drying up, begins selling waterbeds, then opens a pinball palace, ventures both based on fads and rumors; Alana first pursues acting, then politics, actions undertaken based on a broader sense of dissatisfaction with the course of her life.

As might be expected, Licorice Pizza operates in a much more clearly definable mode than the majority of Anderson’s works: the coming-of-age story, though fascinatingly it is applied to both the teen and young woman. Alana and Gary are effectively equals, which remains more-or-less wholly tied to their perspectives throughout, shifting fluidly between wide-eyed idealism and something more pragmatic, if not bitter. Bitterness, or at the very least reality, comes in the form of the four adults, each based on real people, who successively take center stage in the last half for their own sequences: actor Jack Holden (Sean Penn channeling William Holden) and director Rex Blau (Tom Waits), hairdresser and famously illiterate producer Jon Peters (Bradley Cooper), and closeted politician Joel Wachs (Benny Safdie). Each puts on their own airs, whether they be Wachs’ private and necessary secrecy, the coked-up macho energy of Peters, or the carousing and creative fantasies of Holden and Blau—indeed, the first conversation between Penn and Waits, each trying to out-gravel the other in their murmured reminiscences, heralds an entirely different energy the film occupies until its final moments, which enter a unique state of rapture.

For Licorice Pizza ultimately is a funny and romantic film, if filled with danger and excitement—the Peters section ranks as one of the more harrowing vehicle-based sequences in recent memory—to burst with incidents and details. To match this, it feels Anderson has returned to a more youthful style, filling his work with long Steadicam tracking shots through groups of people in rapid motion. There is also a broader approach to comedy than he’s used in some time, which especially focuses on identities: the Haim family play themselves and emphasize their Jewishness; John Michael Higgins is a restaurant owner who speaks to his virtually interchangeable Japanese wives in a horrendous accent and pretends to understand what they are saying.

Amidst this general climate of hustling, Gary and Alana emerge from the tapestry in large part because their pretending goes so hand-in-hand with their zest for life. Hoffman and Haim are quite natural and relaxed in the way they carry themselves, the former filled with an awkward confidence and the latter a forthright radiance, and by film’s close it is apparent their roads are inextricably intertwined, no matter the obstacles life throws their way. As it is with them, as it is with Anderson and Licorice Pizza: recognition of the failings of others, the compromises those weighed down by the past must take, can allow younger people to take flight in their own idiosyncratic directions. At least for a little while.