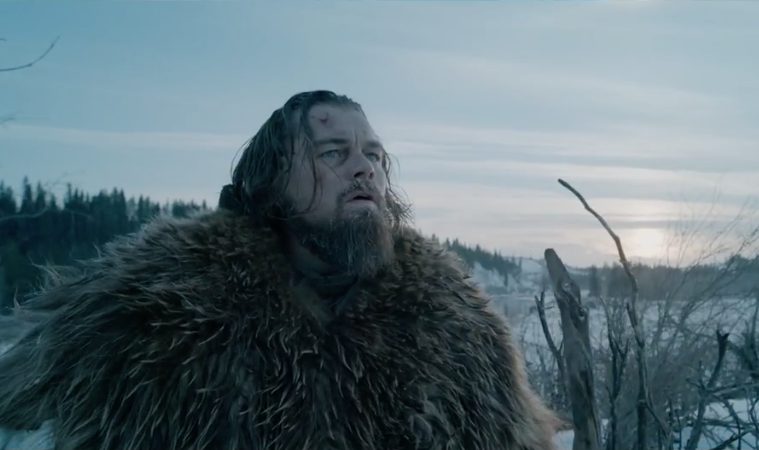 After rumors of behind-the-scenes squabbles during the difficult shoot — which, as of this posting, has yet to be complete — the blood, sweat, and tears poured into Alejandro González Iñárritu‘s The Revenant was apparent in the recent debut of the first trailer. We’ve now got another peek behind the production thanks to a new conversation with the director and star Leonardo DiCaprio over at Grantland.

“It was a different type of challenge for me, because I’ve played a lot of very vocal characters. It’s something that I really wanted to investigate — playing a character that says almost nothing,” the actor said, revealing what the trailer hinted at. “How do you relay an emotional journey and get in tune with this man’s angst … without words?”

An extensive production northwest of Calgary lasted upwards of nine months, thanks to a narrow daily shooting window caused by Emmanuel Lubezki only capturing scenes in natural light. They weren’t able to get it all, however: DiCaprio and Iñárritu are now set to travel to Ushuaia, Argentina for a final week-long shoot to capture the proper snowy setting that’s needed for the film’s finale.

“Actors were not in sets with green screens and laughing. They were miserable! And they really feel the fucking cold in their ass! They were not acting at all!, Iñárritu says. “We had a blizzard that was 29 degrees below and the water was coming from the river, full of snow. I was trying to get my phone, to take a picture — and if I take off my glove to take a picture, 40 seconds, I couldn’t feel my fingers. There were moments when you said, ‘What the fuck are we here for?’” He concluded, “It’s been a challenging period of postproduction, editing, and preproduction, which is weird. Nonstop. Honestly, nonstop.”

Speaking about DiCaprio’s performance, Iñárritu says, “Honestly, Leo, he’s attacked by a bear, and after that, he becomes almost like a silent character: a lot of things going on, but no words. That’s for me the essence of cinema: not to rely on the words, but images and emotions.” He adds that he sees his character “as an example of the relentless possibilities of the human spirit against so many challenges: racial, physical, spiritual, social. I took that opportunity to create my own Hugh Glass: my interpretation of who he could have been.”

As for what his interpretation included, the original drafts ran rampant with themes of revenge. However, the director says, “Revenge is a feeling [that] when you commit it, it leaves you empty. It’s not a wholesome emotion, and it’s not satisfying.” Instead, he created the character of Glass’ son named Hawk. “I thought that a father-son relation, a filial relation, is much more complex and fulfilling — more empathy,” the director adds. DiCaprio says, “By having a son that is half-indigenous, that son is even more isolated. Really, it’s a journey of a man who starts off incredibly lonely and becomes more and more so.”

“He hits so many notes,” the director says of DiCaprio. “He’s not just an incredible actor, maybe the best I’ve ever worked with, but as a filmmaker — the way he understands camera, I think he is one of the smartest people I have worked with. And the way he conveyed what’s going on inside — by his eyes, his physicality, the body language — I think he did an amazing job.”

“You are really at times within this character’s head. You are experiencing what he’s experiencing, as an audience member,” DiCaprio adds. “It’s really a unique film, and I don’t think it’s something people have ever seen before. [Iñárritu] pulls off some pretty astounding techniques. If you can have the audience submerge into a completely different reality, you’re accomplishing something pretty profound. A lot of this stuff that you’re going to see in this movie is going to be incredibly memorable. That I can say for sure.”

It certainly sounds to be quite an ambitious undertaking and one no one will get their eyes on in full until December, the director confirmed with Hollywood-Elsewhere. So, if you were planning on booking tickets to a fall festival solely in the hopes for this to be screened, one might want to a) rethink their priorities and b) prepare for disappointment. There’s much more from the interview, which we recommend checking out at the source, but we’ll leave you with the description of one of the film’s opening sequences:

Near the film’s beginning, a brook is seen … and as the camera moves upstream and pulls back a bit, showing rocks and trees in rich chiaroscuro, a gun pokes into frame. It is Hugh Glass’s gun. Summoning his son, Hawk, he spots an elk at the river’s edge, loads and raises his gun to his cheek … and pulls the trigger.

The scene moves to a trappers’ settlement, the look of the men and their encampment as messy, random, and reeking as production designer Jack Fisk hoped it would be. “Film cleans everything up so much,” Fisk notes. “I wanted to be able to smell their environment, and Alejandro wants that grit and reality.”

Suddenly, there’s an attack from Arikara swooping down from a nearby hill, the scene likely based on an actual 1823 battle that followed the rape of an Arikara woman by a drunken trapper, according to Loren Yellowbird, another of the production’s advisers. What follows is bravura filmmaking of the Chivo/AGI school, plunging audiences into the scene’s mayhem, fear, panic, and rage with the sort of rhythm and swoop and drive that is both viscerally thrilling and keeps viewers aware of what they’re seeing at all times, as the routed trappers flee for their boat.

The Revenant opens on December 25th in limited release and wide on January 8th.