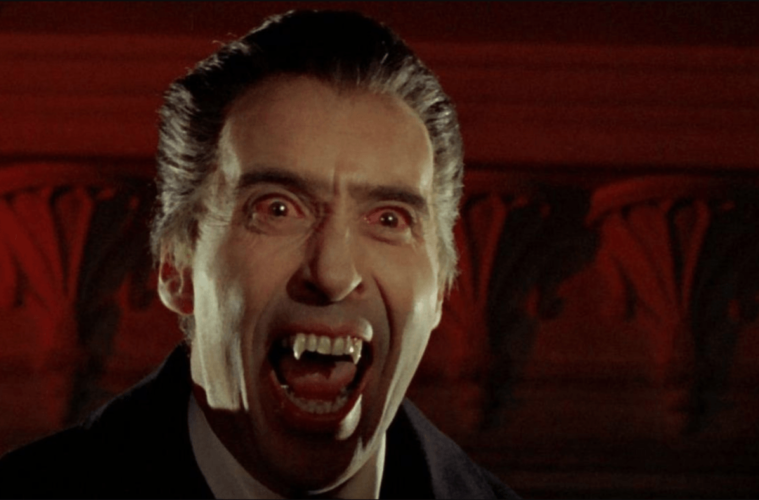 Leave the Lights On, to Ease Your Soul: Hammer Horror at the Quad

Hammer Film Productions ran itself on a loose set of commandments that had to be followed in all of their horror pictures. They obviously made more than that, often combing the fertile grounds of science fiction, sword-and-sandal affairs, and even the rare bank robbery, but their legacy is horror, and in those films you were going to see certain things. You could expect Peter Cushing or Christopher Lee (maybe both) duking it out in suave Gothic mansions or the quaint decor of a vampire’s crypt. You were going to see blood, sometimes lots of it, and women were going to wear beautiful, low-cut dresses that mostly existed to sing the praises of God-given cleavage. These were B-pictures, often trashy and always pulp, but behind the camera and in the heart of these movies is the single greatest output of house-style scares this side of Val Lewton’s cabal of war-time chillers for RKO Pictures in the early-to-mid-40s.

The currently ongoing retrospective series at New York’s Quad Cinema, entitled “Hammer’s House of Horror,” showcases 32 of the famous English studio’s pictures. Part one of a mammoth two-leg series showcases Hammer in their glory years from 1956-1967, where they made bank on modern updates of Warner Bros. monsters with films such as The Curse of Frankenstein (1957), The Horror of Dracula (1958), and The Mummy (1959) while also branching out into radical, chilling science fiction fare from the likes of Joseph Losey (1963’s The Damned) and tightly wound thrillers such as the woefully underseen Cash on Demand (1961).

Part one is a highlighted tour of everything Hammer did well, and one would be foolish to start anywhere other than their monster pictures with the aforementioned Lee and Cushing, as directed by Terence Fisher. Their first film together, an adaptation of Mary Shelley’s Frankenstein, leans into the text’s gruesome moments with a focus on Lee’s shambolic sway and nervy gestures, conveying the character tapping into being the manifestation of an open wound. He’s had his humanity stripped from him because he’s something altogether different, and Lee fundamentally understands that this character, while horrific, is not guilty of being a monster. That would fall firmly on the shoulders of Dr. Frankenstein himself, played by Cushing — vastly superior in this film to Colin Clive’s portrait in James Whale’s 1931 WB classic. Cushing has menace bubbling under the surface, but Fisher’s morally ambivalent direction lets us decide for ourselves if the Dr. is just in his quest for a scientific breakthrough or one fool playing god. Everything was considered madness in science at one time or another, so why should we be stuck in the past of our own ideas? And the actor sells that very notion with verve and enough seductive physicality to convince you to follow him on his journey.

Terence Fisher would end up directing five of Hammer’s Frankenstein pictures, three of which play in this series. His penchant for tapping into the decay surrounding the otherwise meticulously put together set dressing of 18th-century England was right at home when he directed their next monster picture, The Horror of Dracula. Shot in gorgeous Technicolor, the film leans into the crimson on the gray of Dracula’s (Christopher Lee) decaying skin. Lee plays the role like a silent film villain leering into the eye of the camera so that the image of his entire face in a blown-up close-up feels completely overwhelming. He’s horrifying, but smartly understands that Dracula is both a predator and a creature of seduction, fixating on gestural acting: his hand slowly moves up a woman’s breast toward the nape of her neck, unleashing her from corsets and letting her bask in the resolute freedom of immortality and sexual anarchy. You just have to die first. With these movies, Lee fixed the image of Dracula as a pop-culture fixture, giving him an immortality of his own.

Hammer’s Dracula films are the most consistent of all their long-running series, Brides of Dracula and Dracula Has Risen From the Grave (directed by unsung Hammer hero Freddie Francis) equalling the quality set by their initial adaptation of the Dracula narrative. Moving beyond monster pictures, more gems are to be found — including Cash on Demand, which features Cushing’s all-time greatest performance. Directed by virtual unknown Quentin Lawrence, Demand follows uptight, principled, bank manager Harry Fordyce as he gets tangled up in a bank heist and a battle of wills with silver-tongued devil, Gore Hepburn (Andre Morell). Fordyce is a man who values duty, honor, and his job above all else. He keeps a watchful eye over every cent resting in his bank vault, and when Hepburn forces him into a no-win situation by holding his wife and child hostage until Fordyce assists in his bank robbery, he breaks the man. Cushing nails the shift in character when put under the pressure of considering life beyond the bank vault. That he doesn’t go for broad, violent theatrics — instead opting for something closer to humiliation and torment — makes this difficult to watch. Quentin Lawrence shoots everything with a close eye on Cushing’s performance, amplifying his grace notes and perpetual anguish by twisting the knife in even further by never leaving his side. It’s a bottle-episode-as-movie set entirely in one location in near-real time, and the rhythm Lawrence finds in long, delicate dialogue scenes between the over-confident bully with swagger, Hepburn, and the pathetic submission of Fordyce, whose entire worldview is crumbling, is downright electrifying to watch even when it’s harsh. Its loose ties to Dickens’ A Christmas Carol make it one of the sickest Christmas movies ever made, but unlike something such as Black Christmas the only drops of blood here are metaphorical but just as searing.

The Quad Cinema deserves absolute applause for bringing together these lost gems with the already blood-stained-in-the-wool classics, because it shows a deeper picture of what Hammer Film Productions was capable, and the scope of their creative outlet as a studio. There are countless horror titles in their catalog to gravitate towards, many of which are playing in the ongoing series — e.g. the already mentioned monster movies, the astrological occult leaning The Devil Rides Out, the Sherlock Holmes adaptation of The Hound of the Baskervilles — but the Quad is proving once and for all that Hammer was a place for not only blood and thrills, but engaging, well-made cinema too. Part one is only the tip of the iceberg of showing what Hammer could do, but what is present in this retrospective series is a definitive statement on the quality of one studio’s contributions to the canon of English cinema.