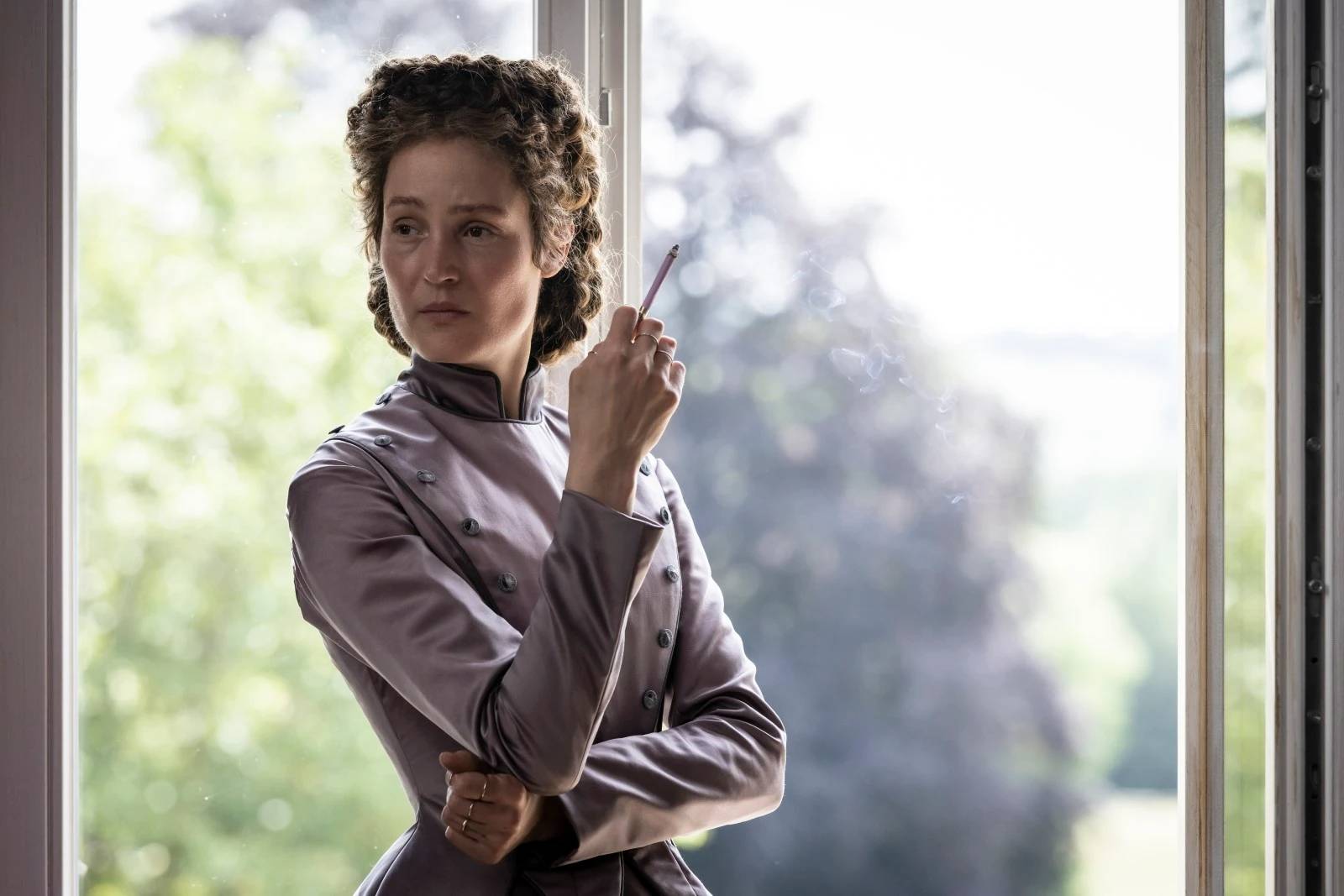 In Corsage, Vicky Krieps delivers a performance brimming with salty despondency and inner life. Gasping for breath in the garment from which this film takes its title, the Luxembourgish actress stars as Elisabeth Eugenie, the 19th-century Hungarian queen and Hapsburg empress tasked with quietly presiding over a kingdom in its early stages of unraveling. The director is Marie Kreutzer, an Austrian filmmaker whose previous effort, The Ground Beneath My Feet, told another story of a woman and an unraveling. While that film competed for the Golden Bear, Corsage took Kreutzer all the way to Cannes, making a splash in Un Certain Regard and justifiably rewarding Krieps for her work.

Taking cues from Sofia Coppola, Yorgos Lanthimos, and Pablo Larraín, Kreutzer leans on a recent maxim: the only socially acceptable way to examine monarchy in this day and age is to do so through the eyes of an unruly, besieged, forward-thinking outsider; and just like those filmmakers, Kreutzer peppers her work with anachronisms, fancifully reimagining events so to accentuate the sense of a world out-of-step with the one outside. We hear live string renditions of Marianne Faithfull and Kris Kristofferson. A young Louis Lumier appears with a dangling gold earring—a look more Kreuzberg than Hapsburg. Most bracing of all is Corsage‘s epilogue, though to give that away would only ruin the fun.

Almost 70 years since Romy Schneider’s Sissi, the empress’ life was probably due a retelling. Famous for her looks and the lengths she went to maintain them—bathing in olive oil, washing her hair with Cognac; that sort of thing—Sisi also became known for her bouts of what was then deemed “melancholy.” Kreutzer’s film looks to give voice to those struggles with depression, tracking her disillusionment and acts of defiance (taking up smoking and other hobbies unbecoming of a queen). The drama, however, doesn’t always live up to the exuberance of those ideas.

We’re in the late 1870s, and Sisi and Franz Josef I’s relationship is on the fritz. She’s just turned 40—the average life expectancy of her subjects, as one friend gamely reminds her. Rueing the arrow of time, Elisabeth has grown obsessed with maintaining waifish looks, limiting herself to a diet of sliced oranges and watery broth. She is also sick of not being heard, and Kreutzer appears bold enough to suggest that, had she been, even WW1 may have been diverted. (It’s not not a reach.) The empress and episodic film find diverting energies elsewhere: an unconsecrated affair with a stable hand (Colin Morgan); hanging out with her friend Ludwig II (a nice cameo from Manuel Rubey as the man who backed Wagner and the construction of Neuschwanstein—I’d take a spinoff); visiting “melancholy” women and wounded soldiers in hospital wards; and her meeting with Lumier, who offers Sisi another way to preserve her beauty while hinting at the historical shifts soon to come.

Coppola’s Marie Antoinette will always be the touchstone for works of this ilk. (“She’s just like us,” the filmmaker seemed to say; which maybe made more sense to a member of one of Hollywood’s own dynasties.) Corsage is a more muted work—it’s often deadly quiet—and at times can be more interesting for it. Aside from one blink-and-you’ll-miss-it moment at the start, we’re spared any obvious fourth-wall breaks, but you still feel Corsage spilling out from its own historical margins. Kreutzer’s flourishes are convincingly baked into Sisi’s world, to the point where you almost begin questioning their lack of veracity. Why, for instance, is there scaffolding on the statues in Ludwig’s garden? And why does the man who stands guard outside the Emperor’s chambers appear to be in the service hallway of a hotel, with fluorescent lighting and a stack of golden conference chairs beside him? Corsage might be at its best in moments when these cracks begin to fade.

Corsage is both a love letter and fan fiction, and Kreutzer’s mono-focus on Sisi gives Krieps (who produced the film and originated the idea) sufficient road to stretch out her talents; finding new angles, sharper corners. Since her career-making turn in Phantom Thread she hadn’t quite found a fit like this, looking just a little lost in perfectly good and finely cast projects like Old or Bergman Island. Of course, it’s a given that her poise and statuesque features would have eventually found a home in period filmmaking, but it’s her spikier self, that wry side-eye and fascinating poker face, that really make Corsage work. We already kind of felt like we knew Diana and Marie Antoinette, even Jackie. Kreutzer adds another name to that list of young women thrust into the unforgiving glare of her subjects’ eyes with a finely crafted piece of revisionist history that feels genuinely punky and valuable without ever slipping into dreaded novelty.

Corsage screened at the Karlovy Vary International Film Festival and will open in the U.S. from IFC Films.