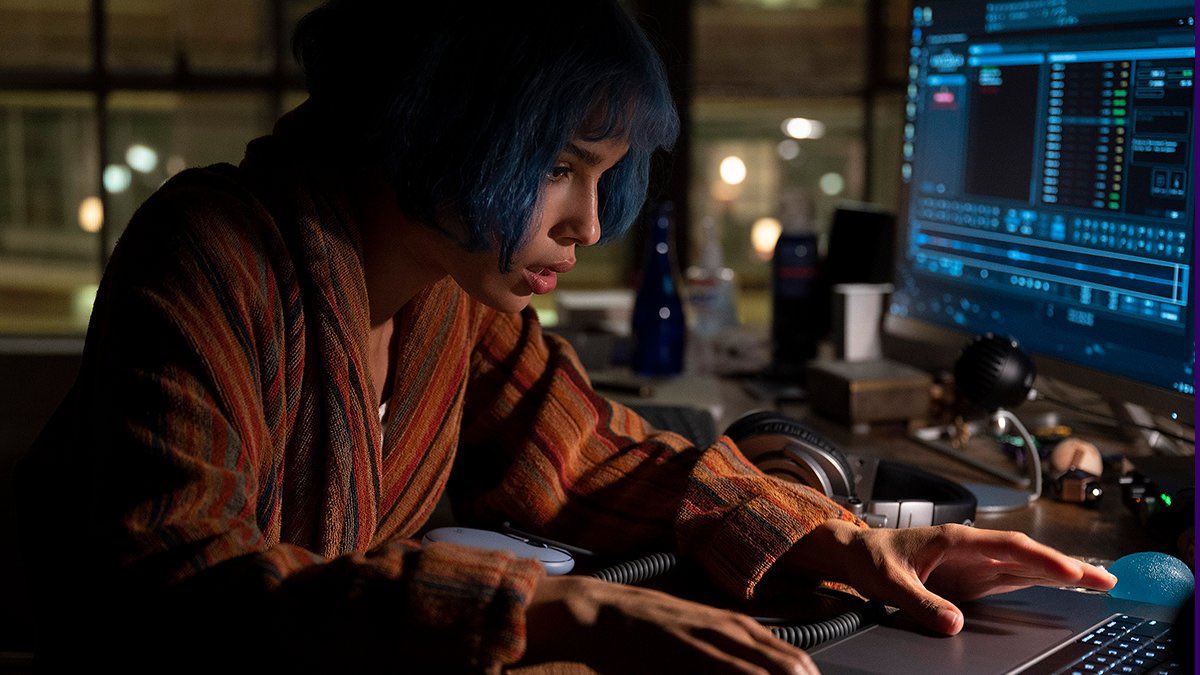 The double-edged sword of modern technology—the simplification it can offer our lives and its all-consuming pervasiveness—is at the heart of Kimi, Steven Soderbergh’s acutely efficient and effective pandemic-set paranoia thriller, but that is not the only thing on its mind. Powered by an affecting lead performance from Zoë Kravitz, its brisk narrative also contends with no shortage of other topics: debilitating, trauma-induced anxiety; pandemic-spurred loneliness; bureaucratic gaslighting; and, least importantly but most humorously, the annoyance of background distractions on Zoom work meetings. As an impressive melding of grounded, relatable stakes and heightened B-movie jolts, one wonders why it took this long for the director to team with writer David Koepp, whose inclination towards pure entertainment is an ideal match with Soderbergh’s fleet-footed, slick sensibilities.

With a paralyzing fear of the outside world, Angela Childs (Kravitz) spends her days holed up in her Seattle apartment, working on resolving a seemingly endless log of coding errors detected by Kimi, an Alexa-esque device with audio-capturing tech certainly overstepping its boundaries. Aside from FaceTime calls from her mom and chats between annoying co-workers, her only relationship is with her adjacent neighbor Terry (Byron Bowers), who comes over for regular hook-ups. In establishing Angela’s fiercely methodical routine and OCD tendencies for cleanliness––she starts the process of washing her bedsheets mere moments after she and Terry have sex––Soderbergh’s skills at table-setting have rarely been more adept. Establishing every inch of her apartment from nearly the get-go, Kimi is a masterclass in build-up, reminiscent of Koepp’s own Panic Room. Despite its heavy lifting from Rear Window and the holy trinity of Blow-Up, Blow Out, and The Conversation, Soderbergh adds more than enough detailed specificity to Angela’s obsessively structured view of life to make this experience play wholly original. When she’s typing away as code fills her screen it looks believable. When she discovers a violent crime on one of the recordings and pulls a bevy of analog equipment to analyze it, Soderbergh details the process of adjusting levels to uncover what will lead her down a nightmarish rabbit hole of cover-ups. This acute level of attention to every facet of Angela’s journey adds to the boiling intrigue, and it’s simply a pleasure to see Soderbergh orchestrate the set-ups and pay-offs throughout.

As Angela ends up being forced out of her agoraphobic bubble, Soderbergh’s formal style also follows suit. Shifting from controlled, precise camera movements within Angela’s apartment, we are flung into the unwieldy outdoors in one the most accurate depictions of a pandemic environment onscreen yet––a fitting throughline from the director of Contagion. The camera moves to restless handheld, canted angles unveiling a potential threat around every turn; we may not be hunted like Angela every time we step outdoors, but the recognizable nature of our lives being thrown completely off-balance is rendered quite credibly. Rather than being about the pandemic, as so many recent films have unsuccessfully tried, Kimi is more interested in using its mental and emotional repercussions to create what is, above all, a thrilling genre exercise. This becomes evidently clear by the third act, which delivers unforgiving comeuppance in the form of delightful B-movie amusements.

Considering Soderbergh himself recently said that he hasn’t made “a film” since Che—only “movies”—this recent, breakneck stretch of his career has perhaps led to some misjudged notion that he’s solely outputting disposable, lightweight entertainment. Kimi proves a full-bodied refutation to this idea, exploring thoughtful, pertinent issues in an immensely entertaining, compact package. There are few, if any, directors whose joy for experimentation in pop filmmaking can register as effectively without playing ostentatious. Once again Soderbergh has delivered a film that comes across as effortlessly constructed, which could only be achieved through immense consideration of every detail.

Kimi is now on HBO Max.