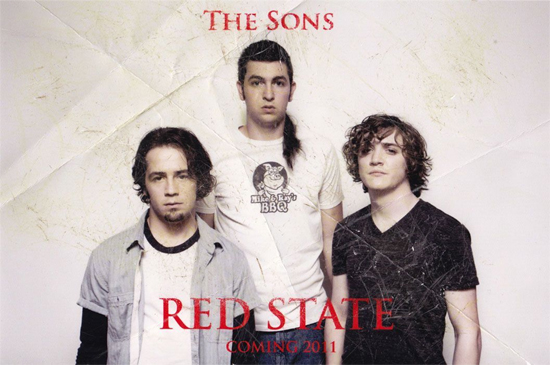 In case you’ve been living under a rock over the past year, or don’t pay attention to things that concern Kevin Smith, here’s the story behind his newest film Red State: shot for 4 million dollars, it premiered at Sundance (our review here) where Smith was going to auction it off to the highest bidder (our video here). Instead of a studio picking it up, Smith “bought” the film himself and told everyone that he didn’t need the old studio system to sell his movie; he could do it himself. This led into the Red State, USA Tour, a roadshow in which Smith brought the movie around the country and hosted a Q&A after each screening with whatever cast members decided to join in on the fun.

To the surprise of some, apparently the some who don’t realize how much money his fans are willing to spend to see him, this ended up being successful and even profitable. Couple that with selling the international rights to a few countries, and the Red State experiment was an “in the black” success. And for the rest of us, the ones waiting to see it who couldn’t afford the Red State, USA Tour prices? Our time is coming, and it’s not the theatrical release that many of us thought it to be.

On his Red State blog, The Red Statements (via /Film), Smith has announced his distribution plans for the United States and he’s mixing old media and new media together. Partnering up with Lionsgate, Red State will be hitting Video on Demand starting on Labor Day for, as the man himself put it, ” like $10″. That’s the new media portion; Smith is also going to show it in movie theaters but not for a long stretch of time like it was initially made out to be.

Instead, it will be a one night only event, much like the Fathom Events Regal Cinemas run, where for 20 bucks you’ll get to see Red State followed by a Q&A, and then immediately after that a taping of his popular SModcast Network podcast Hollywood Babble-on with his partner in crime Ralph Garmin. The date is still going to be the one he’s been touting all along, October 17th which will be the 17th anniversary of his first film Clerks, which is a Monday night. Not the ideal day to open a flick in theaters, but at least there won’t be competition.

I personally love this idea; like if the idea was a woman with a good personality and killer eyes, I’d marry it. Video on Demand is becoming more and more of a powerhouse and is something that should be embraced by independent filmmakers as the de facto distribution model. Smith adopting this, despite always being a “theater-first” guy, shows that he understands the changing climate in how we obtain our entertainment. Plus for all his fans, and there are many of them (yes, I’m included), it makes it easier to watch and with that ease comes, that’s right, more money. A person is liable to pay 10 bucks to watch it at home rather than drive an hour, waste the gas, and then spend more than that on a ticket. That’s smart business.

The one night theatrical release event is also a good idea in and of itself. Smith seems to know that Red State probably won’t have the legs to make the kind of bank that would justify a strong theatrical run. So what do you do instead? Give the diehards four hours of entertainment and make the money they spend count. Well-played. As a big fan of Hollywood Babble-on, I may even drop the bones to see it in the theater just to see Garmin perform the impressions I hear every week. Fingers crossed for Harrison Ford.

In short, this a great idea done by someone who understands not only his fanbase, but the rising power of video on demand and what it can do for a film that won’t necessarily take the theatrical world on fire. It’s a great move and I support it one hundred percent.

What do you think of the Red State distribution plan?