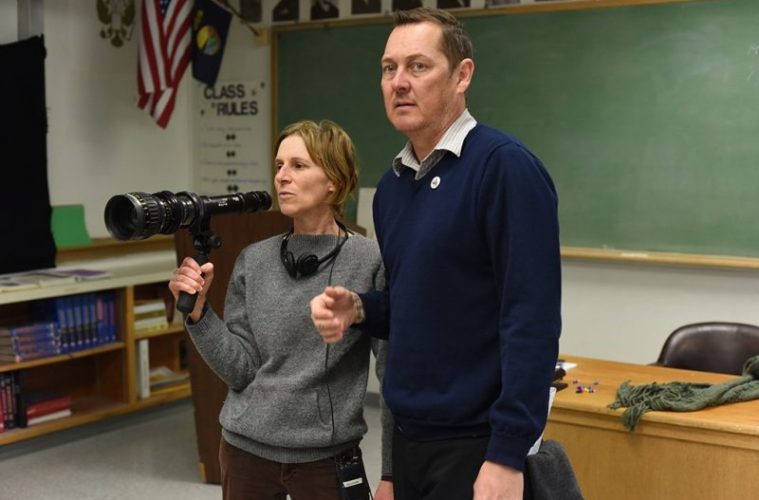 In pacing, mood, and form, Certain Women is undoubtedly a Kelly Reichardt film (and we’re glad), but those who can make that distinction will be all the more likely to spot some incongruities. For one, it’s an omnibus film that takes the format and its possibilities very seriously, in turn giving its incidents an added tension – so it is when there’s simply less time to linger. It’s also set outside her beloved Oregon, a state she’s done more for than any working filmmaker, or perhaps just any filmmaker, period.

This became the crux of my interview with Reichardt, who I’d spoken to when her great (and perpetually under-appreciated) Night Moves opened in the spring of 2014. Now seated in a midtown hotel, we had a largely off-the-cuff conversation — short story: I wasn’t supposed to speak with her during the press day, so I just ran with what impressions the movie, seen two days prior, left in my mind — that reveals what her admirers could imagine: an artist deeply in tune with the world around her, noticing its peculiarities and differences and finding a way to embrace them.

Certain Women premiered in January, and, as happens with all your work, garnered many reactions. People have no shortage of things to say about a Kelly Reichardt film.

Oh, I see. Maybe that indicates what you’ll answer, then, when I ask if you’ve made anything of the conversations that have followed your movie.

No. I can’t… whatever. On the night of, I’ll read the first couple of things that come out, and then I just have to tune out. Stay off the Internet when it concerns yourself, is my philosophy. I’ll read a few things and get “the gist” of it, and then… no, actually, I spent the summer working on a script and, kind of, just in this whole other world of thinking of a different movie. So, yeah, now it’s weird to shift back into Certain Women mode.

But I did go back out to the ranch where I shot this summer, and it was nice just driving cross-country — which I do a lot — and I stopped there, and it was just nice to be in that place and not be so frantic. To see the horses, the dog, the ranchers. Anyway, I’m not really answering your question. I can’t… I don’t know what I’m supposed to do with all that information. Yeah. Yeah, I don’t know. I guess, yeah… it… yeah. I don’t know. [Laughs]

I made a point of not knowing anything about this beforehand, and so I found myself surprised that you weren’t working in Oregon. I’d like to know a bit about the decision to move out to Montana, as well as the acclimation process.

The acclimation process was, like, going to the ranch in the morning to work with the rancher. My assistant director, my cinematographer, and I going to the sporting goods store every single day and buying another layer of heavier boots, heavier jacket, trying to find some amount of clothing to stay warm in. What we learned is that there’s some point where you just can’t get warmer from clothes. [Laughs] It’s cold. But just getting to know a place. It was the first time I’ve lived somewhere that was not on a coast; I’ve never lived inland before, where you’re just surrounded by mountains. There’s, like, a mountain range on every… it does change things. There’s a really different feeling.

Like, I didn’t feel as… all the play-by-play politics of the day feels so less important, and there is a thing about being isolated that comes with the landscape. “Insular” is more the right thing to say. I was living in this super cookie-cutter house, which I found so refreshing — that it was this little blank slate I could go to. There’s a little creek out the window. I had the grocery store I went to every day. It was just living this… all of a sudden, I just made this environmentalist movie, Night Moves, and now I’m driving an SUV, listening to country radio. You press the thing, the garage door opens, and you drive through the garage and take your groceries to the side door. I lived in New York for 26 years and it’s just so out of my experience. Like, “Oh, this is what people do. You come in here and this makes sense. I could get used to this garage-opener!”

All those things. I just became really attached to Montana, and I didn’t think I would be. A lot of the crew have been back since. I remember when [producer] Neil Kopp and I, on one of our first counts — I mean, I drive back-and-forth through Montana a couple of times a year and just kept driving from New York to Oregon — and I remember Neil saying, “It just doesn’t look enough like Oregon for us to shoot out here. It’s going to be much harder for us to shoot out here. It doesn’t look different enough.” And, of course, now, the landscape looks completely different to us. You just start to find the details; Montana doesn’t look anything like Oregon to me now. But I knew what he was saying at the beginning, so you start to… it’s just starting to know a place and, all of a sudden, becoming familiar with that eagle family that lives on top of that telephone pole that you pass every day. If the trucks have to stay at the diner because it’s too windy.

The first time I scouted Livingston, we just thought we were there on a strangely windy day, but that’s what Livingston is: it’s one of the windiest places in the country. I wanted a white film, but, by the time you get your car rig on, the snow will have vanished. Two inches of snow will be gone; a foot of snow will be gone halfway through the day, when you’ve just done half your shots and, now, it’ll be perfectly green out. It was a really challenging landscape. I thought Oregon was challenging, with the way it rains and doesn’t rain all the time, but the wind was like a whole new beast that was really different, sound-wise, and you realize that, in a lot of places, the wind would run through a truck stop, and the sound can be super-musical. You go, “What is that sound?” In all different places. Sonically, it was different.

I don’t know. You just settle in and get used to it. Before you know it, it’s time to leave and you become attached. I find myself missing it. Not production; I don’t miss that — but I do miss Montana. It brings you closer to the stories. I realized, when I first read those stories, I didn’t really have an attachment to Montana. I liked Montana, but I didn’t have an attachment to it the way I do now.

When we talked a couple of years ago, you said you hoped to leave Oregon.

[Laughs] I mean, I love Oregon — don’t get me wrong. It’s just such a discovered place.

I’d like to know more about this issue of it feeling too familiar.

Well, just that I feel, sometimes, like I should shake it up a little bit. I mean, I live a very unadventurous life most of the time, and then I make these films and they’re adventures. All the areas we’ve shot in Oregon have been incredibly different. Southern Oregon is really different from eastern Oregon, which is a desert. So it is such a diverse state. Those landscapes were all really different. But if I wasn’t going to be working with Jonathan Raymond, it seemed crazy not to sort of mix it up and look for some new setting, just to try.

What I liked most about Certain Women is that, in the three stories, there’s a plurality to the actors’ presences — Laura Dern is not like Michelle Williams, and neither are like Kristen Stewart or Lily Gladstone. I wonder about the difficulty of casting for a project such as this, where it’s not only who you like, but what temperatures they each bring.

How they will all work together. Yeah. That is tricky, and it’s kind of fluid, because people… you’re trying to find people that are available, who are up for playing a part where they’re not in the movie for the entire time. There’s a lot of requests that you’re… it’s not an easy one. Also, “What is it? Will this work?” That question, which is always a question. And then, I don’t know — somehow it ends up working out. I don’t know how. Also, just age-wise, I’m so bad at telling what people’s ages are. I just can’t tell how old Kristen Stewart looks vs. how old Michelle looks vs. how old Laura Dern looks. They all look fantastic to me! Everybody put on 20 pounds — we’re going to Montana! Or if pairing James Le Gros and Michelle could work, because there’s a range between their ages, but I thought it did work.

That made it more interesting, really.

Yeah. But, with Meek’s, I’d already had her be “the younger bride.” [Laughs] But I believed their dynamic; I thought they were really good together. So, yeah, it’s an ever-changing…

Yeah. Well, I don’t know. I got pretty lucky, is all I’ll say. I feel so fortunate with the cast all-around — people I’ve been wanting to work with. You know, René Auberjonois, I’ve loved forever since McCabe & Mrs. Miller. I’ve just always loved him. Jared and James Le Gros, who I’ve worked with before.

It’s nice when you’re watching and can go, “Oh, Jared Harris is here.”

Yeah! Yeah, yeah. I was intimidated by him.

Yeah. I don’t know why. Just because he’s a… whatever, a great actor, and he’s got to do this Montana dialect. But he was totally up for it. I don’t know; people are generous.

I’m surprised you could still be intimidated by actors. The films speak for themselves as fine showcases.

Well, you know, it’s just like anything: you don’t know when you’re… it’s just a strange way to meet someone. I got to have lunch with Jared beforehand, so it wasn’t, but it’s a strange thing, just, like, our hopping in with people who you don’t necessarily know, and, on your first day, you’re going to be working these incredible hours together in extreme conditions. Hopefully you have some time during wardrobe to ease into it, to get to know it. Jared came out, because he wanted to know Livingston, and did his thing in town for a few days.

But it’s just a strange way to get to know people. You’re just in it, in something, together. “We’re doing some art project together,” or whatever it is, and, “It’s nice to meet you.” It’s exciting, also, because these are all people who bring things that are different from what you’ve imagined — and so that’s scary, but it’s also exciting. That’s why they come in: because you like what they’ve done before.

Yeah, no, but that makes me nervous: someone who’s been working on a show with a lot of resources that probably runs like a clock — to come out to Montana to work on a low budget. It’s that kind of stuff that makes me nervous. But he’s been in enough small films that he knows the score.