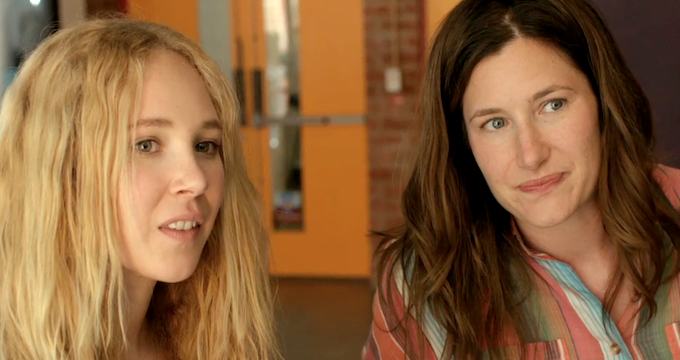 Kathryn Hahn has long played secondary characters that jump off the screen. While she has mostly been sighted in comedies, particularly alongside actor Paul Rudd and/or director Adam McKay’s flicks, this is one of her first roles where she stars, front and center. Currently in limited release, Afternoon Delight also shows Hahn’s range as a dramatic actress, focusing on the realities of life without a true direction. A few weeks ago I had the opportunity to talk with Hahn about the pressure of her first starring role, how it’s like to work alongside Juno Temple, the themes she  enjoyed in the film, and what film festivals she’d love to attend. Read on for the full conversation.

The Film Stage: With this film, you’re transitioning from supporting to lead. Have you thought about that switch and if it comes with more pressure?

Kathryn Hahn: Yeah, absolutely. It’s amazing, I love this part so much. Honestly, when we were making this, I didn’t feel that kind of pressure in any way. I come from the theater, I love the team effort. I love being with a group of actors, so this didn’t feel any different. I could have done this in a vacuum. I mean this as much of my film as it is Juno, Josh, Jane, Michaela’s — it is just felt like another amazing ensemble to me. So I just wanted to tell this story and I certainly think, “Ah, this is my first lead, make sure the lighting is good.”

Can you talk about working with Juno Temple? Somehow she’ll give a stare at the camera and it’s just mesmerizing.

I have to give such a shout-out to that brilliant woman. She’s a gem of a human and she’s an extraordinary actor. When we’re off camera she’s just a brilliant, young woman and then when the cameras turn on, she’s a movie star. She’s just extraordinary and she’s so good in this part. I really appreciate a good, solid work ethic and she has that in spades, she works incredibly hard. This is your first major dramatic role. Have you been pushing for roles outside the comedy realm?

No, I’m thrilled to be in the comedy world. I worship those guys and I love comedy. I’m still a student of them. I love everybody that I’ve been able to work. I absolutely haven’t been searching out for dramatic roles in any way. You’re right, it’s been mostly comedy and some drama here and there and certainly like in theater and Revolutionary Road was a big one for me. But I wasn’t seeking it, it wasn’t very pre-planned. The script came across my manager’s desk and Jill had me somewhere in her mind when she had been thinking of it and I was kind of thrilled.

There’s a great scene where all the wives are together and they are drinking wine. It’s a testament to your acting as we question if you were all sober.

I will testify that we did not have one sip of alcohol that entire day. We said, “if you put any wine in here, it would not work. We are way too tired.” We worked from like 9 in the morning and emerged at 6 at night and were like, “what just happened?” It was such an awesome, surreal day. They blacked out the curtains and we could all imagine it was night and just put a couple cameras up and just shot for hours and hours and hours. As it went on, the more loopy we got, cause we were just in this one room all day. It really, really works.

You have some key lines in that scene that are so potent and in the flow of film. I’m curious if it was improvised at all?

Yeah, most of that scene was on the page. We improvised some of it, but most of it was on the page. It felt true to me, because obviously those things are huge, they are awful. And I don’t think anyone can go through either of those with an ease or comfort, but they are putting on these protective shells on top of it with this wine and false friendships that if you say it out loud in a certain way, it doesn’t mean as much to them, because she couldn’t really deal with the pain of either of those things. This film deals with a lot of different, heavy themes. I’m curious if you latched on to any one in particular or was it the whole?

I always thought of it as walking this fine line. I think there are parts of it that are hilarious and I just had a great deal of empathy for Rachel. I understood where she was coming from and what she was longing for, that she just needed something to fill her life, she was without purpose. There was something about it that was just so vulnerable and such a heartbreaker. She’s so privileged and she makes such self-involved decisions and assumptions and she is a real, complicated human being in a way that she’s not totally lovable and huggable. I think there’s something really interesting in exploring that.

You mentioned this was your first time at Sundance with a film and you’re a film nerd. What would be your number one festival to go, just as a viewer?

Oh, God. I’d love to go to Cannes one day, because I think it would be amazing and Telluride sounds like a really good quality festival. I’m going to go to Toronto this year with a film, hopefully I can see some other movies while I’m there. You’re doing the press stuff during the day, so it’s hard. I’m going with Bad Words, Jason Bateman‘s directorial debut, which is fantastic. I’m really, really proud and excited for him.