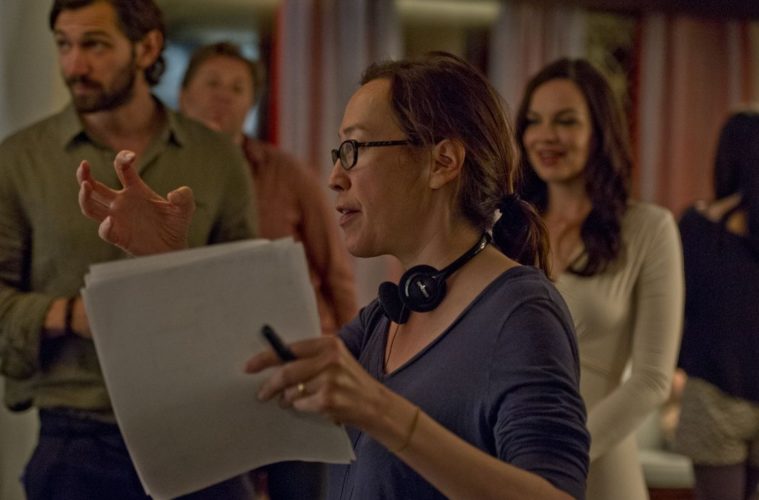 Karyn Kusama on ‘The Invitation,’ Finding The Right Location, Diversity in Casting, and More Returning to her roots, Karyn Kusama‘s The Invitation is a dark and moody drama that deals with depression, loss, and more as we follow a dinner party that is just slightly off-kilter at the outset. Our eyes and ears, Will (Logan Marshall-Green), is supported by a strong cast, including Tammy Blanchard as his ex-wide Eden, Michiel Huisman as the mysterious and low-key new husband David, and Lindsay Burdge as the free-spirited Sadie.

I saw the film back during SXSW last March and with it now out on VOD and in limited release, I had the opportunity to talk with Kusama. We discussed some of my favorite aspects of the film, including the diverse cast, how she shot in one actual home and even set up offices there, giving us an unreliable narrator, and even a spoiler at the end that you can check out after seeing the film. It was a fun conversation and you can read the full thing below.

The Film Stage: One thing that is pretty neat about this film is that it has a very diverse cast. The party is bringing together a lot of people that aren’t necessarily the best of friends. They know of each other to varying degrees.

Karyn Kusama: Oh, yeah. The fact that we made it for basically a million dollars meant that we were given a lot more freedom to cast the film as we wanted. And it was written from the beginning that Gina was Asian and Miguel was Latino and that Miguel and Tommy were a couple. So there were certain things in terms of this question of representation that were written in the script and other things came about in terms of how we cast everybody during the casting process.

I really enjoy an unreliable narrator. Here, with Will, you get the sense early on that he is uneasy about this party. He is our audience surrogate and we see things through his eyes a bit. I’m curious how you find that balance. Is it strictly in the editing or is that something noticeable on set as well?

That’s such a good question. I think it’s a combination of both although it has to start while you’re shooting. First of all, you have to realize you need that balance. To achieve it required a fairly specific use of a certain kind of visual strategy and lenses. There were technical choice made that impart a feeling of things like isolation and subjectivity or something more neutral and at a distance. I was working with those two strains of being in our main character’s point of view and seeing the world from his very subjective perspective but then also finding moments where the film could explore a slightly more neutral approach. This was so the audience could perhaps ask their own questions in terms of Will’s reliability. In the end, you’re right. He’s as much an audience to the night as we are as viewers. So while it is from his filtered version of reality we also are able to wonder if there is something unstable about him.

Without giving too much away, is the opening sequence with him specifically about setting that seed of his potential instability?

Yes, but we had never seen that sequence in that particular way on a narrative level. But we saw it as a metaphor for the ugly choices we sometimes have to make. If a by-product of that is that we are asked to question our main character, that’s probably not a bad thing either.

I love films that take place in one central location for the most part. I’m curious about the home itself. During the film you get a very real sense of the floor plan and I’m curious if you had to cheat and add components and maybe a room that isn’t there at all that is shot at a different location? Was this one real, actual location?

That is the house. What you see is what we had to work with. We were low-budget enough that we knew we had to find the house that we were going to stay in and weren’t going to build anything with the exception of greens and landscaping. Our resources were limited that it forced us to find a single location. I mean, we prepped in the house. Our offices were in the house. [Laughs] Once we found that house it was like we moved in. Once we got our actors, we moved them in as well. For the actors that were supposed to be familiar with the house we got them very used to it as well so it would have its own emotional logic for them. We were very lucky to be able to rehearse the whole movie in the house and understand how the space was going to work with the story and we even made some changes based on that. Once we found that house we made it our reality in total.

Well, sticking with the house, I know there are a lot of windows and the film basically takes place over one long night. So it begs the question of whether you just shot at night or not.

We were hoping it wouldn’t just be a night shoot but I was preparing for it mentally. But ultimately, it worked a lot better for everybody to just tent the house and at very specific moments where we were looking out of the windows it was very clear that it was nighttime. But then there were moments where we really could afford to tent the whole house and it definitely felt like night even when we were shooting in the daytime. When we would walk outside we would be like crazy vampire bats, shielding our eyes.

The film really ends with a huge finale that I quite enjoyed. I think the film really takes off at that point. I’m curious how hard it was to setup the action beats and execute them?

It’s funny. Luckily it was a happy, pleasant set. We were able to shoot almost chronologically, so it added another sense of reality for the actors. But I think everyone was quietly dreading having to get to the end because we all enjoyed working together, which means it would actually be the end. But also there was just something about being able to explore the characters for so long and then have everything descend into pure mayhem that made everyone anxious. But because we all liked each other so much it allowed us to make filming it more fun than it should have been. The point of it was to make it feel quite real. There were definitely moments while we were shooting where it felt pretty icky — uncomfortable. Ultimately I think we did have a weird, perverse blast shooting all of it because we got to know each other so well.

The Invitation is now in limited release and on VOD. See a talk with Kusama and Gil Kenan above.