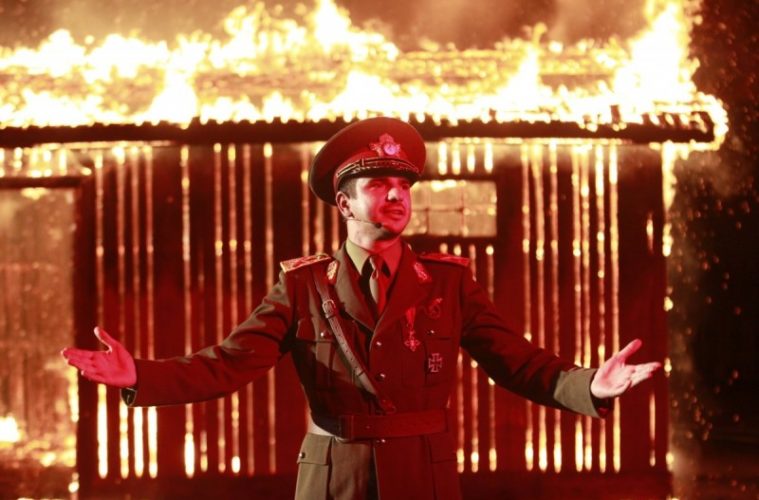 Karlovy Vary Review: “I Do Not Care If We Go Down in History as Barbarians” is Radu Jude’s ‘Day for Night’

Inverted commas withstanding, “I Do Not Care If We Go Down in History as Barbarians” seems like an awfully long and pretentious thing to call a film. Indeed, it might even suggest that something long and pretentious will be awaiting any viewer of Radu Jude’s latest creation but thankfully, in this case at very least, only one of those adjectives is true.

At 140 minutes, Barbarians (as it will be referred to from here) is indeed rather long, especially when considering that one could easily describe it as a drawn-out dialectic on the responsibility of nations to confront whatever atrocities their government and populous committed in the past. So how on earth is Barbarians so funny and compelling? Well, one reason might be that it’s a movie by Radu Jude, a Romanian New Wave filmmaker who has managed to operate just outside the main spotlight of his gilded colleagues, occasionally departing from their stark contemporary realism while always sharing in their brand of gallows humor.

His last significant film, the period-set Aferim!, cast a revisionist eye on the way his countrymen treated Gypsy slaves and Jewish people in the 19th Century and Barbarians looks to do something similar (indeed, it might be a comment on the struggles he faced in getting the previous film made) although this time taking aim at more recent events and also set in the here and now.

Ioana Iacob plays Mariana, an idealistic theatre director who has landed a city-funded project to stage a re-enactment of the Romanian army’s efforts on the Eastern front near the close of the Second World War. The film is the on-set account of her own efforts to bring the project together while attempting to convince the man responsible for her getting the grant, a stooge named Movilã who is played with sufficient greasiness by Alexandru Dabija (star of Aferim!), that the soldiers’ bravery should not be the centerpiece of the reenactment but the Odessa massacre (the film’s title is quoted from a speech given just before the atrocities took place).

That might sound like quite a slog, but Jude’s reproduction of the on-set vibe—presented almost as a pseudo-documentary–produces genuine narrative dynamism (think Day for Night or A Cock and Bull Story). Perhaps it’s the simple fact that production sets themselves are almost by definition dynamic, all intense fleeting relationships, impending deadlines, budgetary worries, hustle bustle, daily chaos and plain hard graft. Granted, listening to Mariana debate whether citizens and artists have a responsibility to shed light on–or own up to–their country’s history may be interesting enough on its own terms but it’s a hell of a lot more captivating when there are tanks and artillery and people in civvies practicing weapons drills in the background. The counterpoint of it all is almost entrancing at times, truth somehow lost in the fog of the absurd–a neat metaphor, perhaps, for the whole production.

Mariana’s character could stand in for many in her position. Not only does Jude commend her creative energy and steadfast defense of her work while acknowledging the added sacrifices she has made for simply having that job and being a woman–at one point she admits “I realized at a young age I wasn’t meant to be loved”—he also significantly questions how desensitized the process of creating such provocations has left her. On a number of occasions, Jude lets his camera linger on a photo or video of an atrocity that Mariana and her crew are using as source material for their work. Their banal conversations about the job at hand continue as we are presented with the horrors on screen. Mariana’s driving force is to present the public with similar horrors but she might just be losing her own grasp on them in the process.

Much like his beleaguered lead character, Jude manages to maintain a rousingly lewd sense of humor for the duration of the film’s substantial running time. Working with a cast of established Romanian theater personalities (this is Lacob’s first lead off the stage while Dabija is better known as a renowned theater director), there is the clear sense of a close-knit community at work. We see it most vibrantly in the ways in which they back talk to one another and attempt to gross each other out. Mariana shows a video of the men that committed the massacre, apparently in prison uniforms, being entertained by a band. The crew, a little boozed up it seems, at first wonder how these guys could have done such horrible things but are soon arguing over which one they’d like to fuck. You could distill everything great about Barbarians down to this one sequence: its humor; its sense of authenticity about the profession; its brilliant disregard for political correctness; and its ponderings on Hannah Arendt’s “banality of evil”, a text Mariana quotes from throughout.

Jude shoots the majority of the film on warm, inviting 16mm in what appears to be a rather lovely spell of weather in Bucharest. Only for the final sequence does he switch to digital, the reason seemingly being to enhance the documentary feel as Mariana and her troupe finally perform their reenactment with Movilã, alongside the city’s deputy mayor and a crowd of on-lookers (apparently consisting of both extras and actual passersby). Played out in full, it proves an unfortunately tedious climax to an otherwise richly layered and intellectually rewarding piece of work. Nevertheless, some conclusions are reached but it’s the questions that remain open that will sit most uneasily in stomachs as they wander out from the theater into the lonely night.

“I Do Not Care If We Go Down in History as Barbarians” premiered at Karlovy Vary International Film Festival 2018.