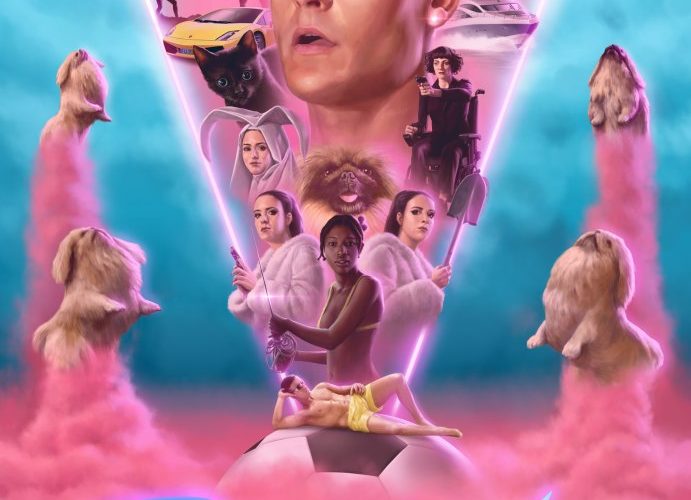 If the protagonist of Diamantino reminds you of a certain celebrity it is, as we can only presume, not accidental. The character in question–for whom this hallucinatory tale is named after–is a professional footballer who plays up front for the Portuguese national team. He sports diamond stud earrings (one in each ear), has a glow best described as maintained bronze, and apparently has yet to find a greater joy in life than pulling off his jersey after scoring a winning goal in order to better share with the world his rippling abs. Are we there yet?

Even if the viewer is the type to neither know nor care about the world of association football (if based in North America, Australia, or rural Ireland, please feel free to read “soccer”) they will surely still clock this particular specimen as a riff on the unavoidable Cristiano Ronaldo. That said I struggle to recall a time when the much-derided goal-scorer admitted to seeing giant puppies and cloud-like swirls of pink cotton candy whenever he took to the pitch.

This is exactly the surrealist sugar rush we are confronted with at the start of Daniel Schmidt and Gabriel Abrantes’ film. It works as both an aesthetic mission statement for their feature as well as a high watermark for all the absurdity to come. It also provides a strangely pleasing visualization of how such godlike athletes might indeed see their mere mortal rivals as they glide past them. Although one might argue that this particular flourish would have better suited a fluid Luca Modric styled player, for example, rather than CR7’s diamond-cutter perfectionism. Whatever the case, we digress.

So where does one take a film with such an eye-popping curtain raiser? Well, our hero (played by Carloto Cotta, who you might recognize from Miguel Gomes’ Tabu) is soon faced with an existential crisis when one day out yachting he suffers a reality check that will result in the loss of his fluffy friends and his footballing mojo when a boat full of migrants appears. Indeed, Diamantino is a film with a great deal more than football on the mind.

In their first full feature as co-directors, Abrantes and Schmidt are nothing if not ambitious and have jam-packed this screenplay with enough conspiracy, femme fatales, and bio-domes to suggest Ian Fleming was on board as script supervisor. Unlike the real-life Ronaldo (fair is fair), Diamantino is not exactly the sharpest knife in the drawer and, regardless of whatever debt it may owe to Derek Zoolander, Cotta’s perfectly dim performance will provide much of the film’s laughs.

Our man lives with his cat in a giant Rococo mansion where his two sisters (played by Anabela and Margarida Moreira, identical twins who seem to have been plucked from a Roald Dahl novel) have been taking advantage of him for years, syphoning off funds while lending him out to be the poster boy for a far-right nationalist party–think UKIP via Portugal with a sprinkling of Trumpisms thrown in on top.

What’s more (take a breath), Diamantino’s brush with the real world inspires him to quit the game and adopt a refugee boy. The filmmakers may have been entering into tricky waters themselves here but, in an unexpected narrative coup, the boy is in fact an undercover female agent sent to go through his files. He’s also never had sex (a daring nod to Ronaldo’s air of A-sexuality). We’ll see about that.

Albeit with low budget production values, it’s easy to be eventually won over by the narrative anarchism and on-point gags. Abrantes and Schmidt play fast and loose with their characters’ genders, firstly with the cross-dressing agent who becomes his adoptive son and then, as a result of a bizarre cloning program, the discovery that Diamantino has grown breasts. This may have come across as risqué were it not for the transgressive vibe already set in place. Indeed, the blossoming of their stunningly taboo relationship might be the film’s main thrill.

The directors’ provocative humor finds a softer edge during the hero’s lonelier moments: like seeing the distant, sad look on Diamantino’s face–illuminated by his smartphone’s glare–as he takes a selfie or surveys the daily stream of internet memes used to mock his every movement. Asif Kapadia had hinted at a similar single-minded loneliness back in 2015 with Ronaldo, an access-all-areas documentary on the star. All three filmmakers seem to come to a similar conclusion: maybe the big guy just needs a friend.

Diamantino screened at Karlovy Vary International Film Festival 2018 and opens on May 24.