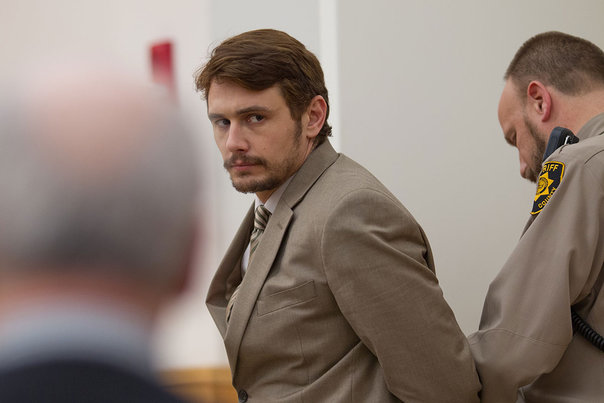 While much of current discussion surrounding James Franco has to do with the release (or lack thereof) of his studio comedy The Interview, but come next month, he’ll be leading two dramas that will premiere at Sundance Film Festival. One is the Gus Van Sant-produced I Am Michael, while the other is Rupert Goold‘s True Story, reteaming him with Jonah Hill, which adapts journalist Michael Finkel‘s novel, following a tale of mistaken identity and an investigation into falsifying New York Times-published articles.

Hill portrays Finkel, who learns that a FBI most-wanted criminal Christian Longo (played by Franco) gets captured and was taking his identity. When Finkel gets fired at the New York Times for reportedly falsifying articles his career seemed over, but Longo only wants to speak to Finkel and so begins a strange relationship. Also starring Felicity Jones, check out the trailer and poster below. On-the-rise New York Times Magazine writer Michael Finkel receives troubling news from his editors that he is accused of falsifying part of an investigative piece on child laborers in Africa. Jobless and disgraced, Michael retreats from the city and falls into a depression. One day, he hears startling news that a fugitive accused of murdering his family was captured in Mexico claiming the identity of “Michael Finkel of The New York Times.” Intrigued by the story, he travels to interview the accused, identified as Christian Longo, to help save his name.

Rupert Goold’s shrewd first feature pits Jonah Hill against James Franco in a psychological cat-and-mouse game obscured by many “truths.” As the two calculating men share their stories in private, their similarities become clear while their motivations are less so. David Kajganich scripts Finkel’s memoir into a subtle portrait of an unlikely friendship.