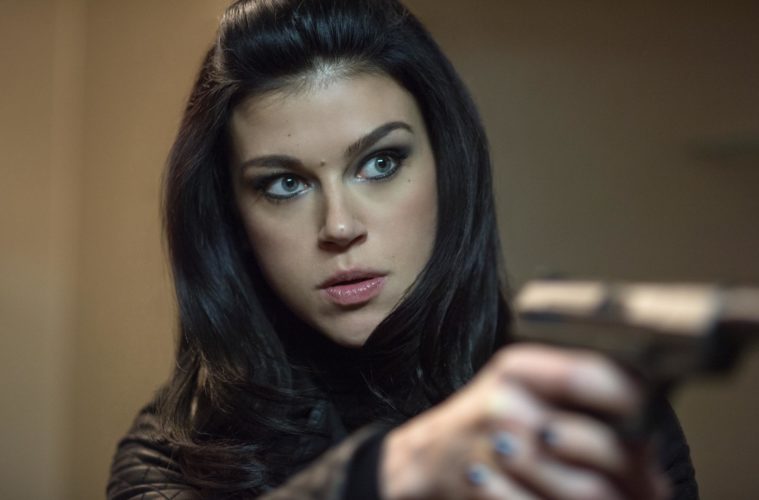 ‘John Wick’ Star Adrianne Palicki on Her Character’s Gender Switch, Beating Up Her Fiancé, and More Currently in theaters, John Wick is a great deal of fun. As I mentioned in my review, the film is a slick and smart action flick that won’t break new ground but does what it wants with extreme success. Filmmakers Chad Stahelski and David Leitch make their feature debut with Keanu Reeves as an ex-hitmen dragged back into his murderous ways. We have my interviews with Reeves and Stahelski and Leitch already up, and this time around we have star Adrianne Palicki who plays another assassin in John Wick’s world.

Palicki has been hovering around the action genre for a while now, and this time she jumps in with both feet. She seemed to be pretty excited to discuss her role in the film, and while we do get into some spoilers I’ve separated them out so you can come back after seeing the film. On the other hand, we talk about how her role as Perkins was originally a male, where she collaborated with the filmmakers to flesh out her role, friends she kept from her various roles over the years, what drew her to the film, the benefits of seeing the film in private first and then with an audience, and even the choreography. Check out the conversation below.

The Film Stage: From talking to other people in preparation for this interview, I have heard that your role was originally written for a male.

Adrianne Palicki: It was.

When I first read the script it was Mr. Perkins.

And you basically said you didn’t want anything changed and to just be a badass.

Yeah, I don’t think they really wanted anything else to change. I love that about it. They didn’t want to make it a female… I don’t know. They just didn’t want to weaken the character at all. They wanted to keep that masculine, emotionless character intact, which is great and I think it really worked. And we also came up with a little backstory between the two. They probably, you know, [slyly grins], were friendly at one point. It worked with the sexual tension in the fight scene.

Yeah, I loved that fight scene in particular. And I loved how they blocked out and framed the action as well. I was telling [David Leitch and Chad Stahelski] that it’s so noticeable that they have an action background because of the way that they film things but also just the fact that they keep everything in frame. And any time they cut, it’s to get to a better angle. So many blockbusters now, they cut and you just confuse the audience.

Yeah, it’s so fast and you don’t get the benefit of seeing the choreography or seeing the actor themselves. I’m sure sometimes those cuts are so that you don’t notice it’s not the actual actor. So, that level of prep and even in the filming, how much do you see a difference between this and, I don’t know, G.I. Joe?

Well, it was so different. G.I. Joe was much more gun and combat related. We were trained by Navy SEALs. The training was exceptional and very difficult. But this was using my body and learning a martial art, which is completely different. Both are equally fun.

You have a lot of fights and I do know that you met your fiancé on set. Did you tumble with him, some?

Yeah! [Laughs and looks at Jackson] Why’s your face red? [Laughs] Yes, yes, I definitely kicked him in the balls probably about four times, at least. Poor guy. [Laughs]

Get it out of the way.

And he still wanted to date me! Which is pretty cool.

So many of these films, like a G.I. Joe or a John Wick, you spend a certain amount of time on set and then you go away. You might make a relationship. You might make friends. But because of the nature of the business, you may never see them again.

It’s so true. You meet so many new people all the time.

Have you kept in contact with anybody from your films or TV roles?

Absolutely. I met Alyssa Diaz on Red Dawn and she’s one of my best friends. Connie Britton is one of my best friends. I think from everything there’s one person I just grab onto and I’m just like, “Okay, I’m keeping you. Not letting you go.” So it’s interesting. A majority of my friends I’ve met on some project somewhere along the line. Whether it was 10 years ago, eight years ago, or yesterday. It’s cool.

How many times have you seen the film so far?

This was only my second time.

Did you see it in an edit?

I saw it at a private screening. So I didn’t get to see it with a large group of people, an audience. It was kind of the best way. As an actor, you’re constantly critiquing yourself, so it’s really good seeing it for the first time where you’re not really focusing on the things that matter. You’re just focusing on, like, “Oh my God, I can’t believe I did that with my face.” All that insecure bullshit. Then to see it with an audience and have reactions, and the enjoyment that was felt… and actually, you miss things, too. The humor that you finally understand. Like in Viggo’s character that I might not have seen right off the bat the first time I saw it. It was so awesome and so fun and I can’t wait to see it with another audience. See if there’s different moments and different things that play.

So, if your part was originally written for a male, how’d you get the script?

Well, they hadn’t actually made the change in the script when I read it but they were interested in me for the part. I remember reading it and, you know, it wasn’t a huge part and it was definitely written for a guy, but I remember reading it and going, “I want to be a part of this movie no matter what. I don’t care if I’m there for a day.” Also, knowing Keanu was going to play the part, I was just thinking, “This is his role. This is his Neo.” This was written for him and I was like, “I just have to be a part of it, no matter what.” Then the way the character came to life and they broadened it and made it bigger. It was totally worth it.

So you had a collaborative aspect with fleshing out some of your character.

What, specifically, do you remember?

Well, there was a lot of talk that for the scene she is in in particular we wanted it to pop. One of the big things was the backstory between them, and how they, like I said, were likely friendly before he got married and maybe this isn’t the first time they’ve fought like this.

I love the gold coin mythology and how it’s built up. So, John Wick gives a character a gold coin for watching over your unconscious body in the hotel. I don’t remember if you ever got it.

Oh, I did. After I killed him, I took it out of his pocket.

I know this is a heavy spoiler, but your character’s demise is this weird oddity. You have so much built up with this character and then she is just kind of offed. It’s almost to the point where I was wondering if there was something more. Was there?

There really wasn’t. The thing is that she’s such a gnarly character that they had to get rid of her. And also, she broke the rules. And I love that it was actually Ian McShane’s character, Winston who took care of it. And in the shots they had done some close-ups of me with it happening, but I love that they kept it in the wide because it’s just so cool to see all these guys surrounding her and just see her fall. It was a very interesting, cool choice.

And I’m sure it was difficult for them to have this character that they build up and just the question of how do we move forward without her. Because you can’t leave her character just out there on the loose.