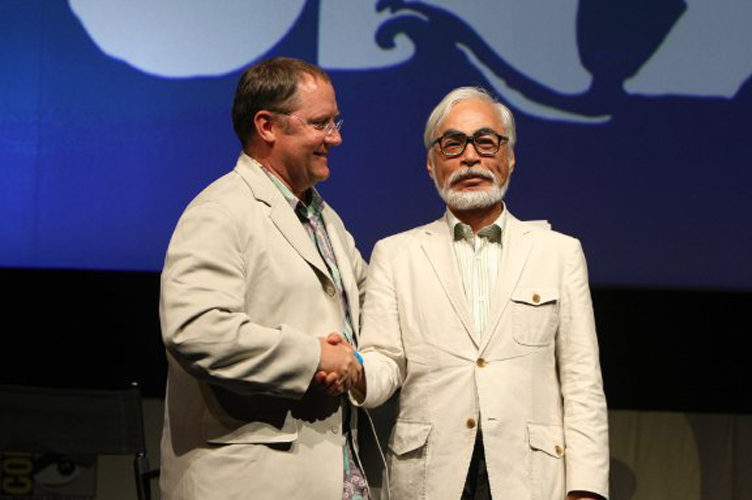 “Whenever we get stuck at Pixar or Disney, I put on a Miyazaki film sequence or two, just to get us inspired again,” he says. “Years later, I always said at Pixar that you are what you direct. Your heart and soul goes into everything you make — I learned that from Miyazaki.” He adds, “I think my entire career is founded upon an idea I discovered in Japan: keeping one foot in tradition, heritage, and the fundamentals of classic design and then applying that to cutting-edge technology. That’s one of the secrets of Pixar.”

At Vulture, Bilge Ebiri on why David Lynch’s Mulholland Drive is a great horror film:

True, Mulholland Drive doesn’t fit into any of today’s typical horror subgenres: It’s not a slasher movie, it’s not a monster flick, and there’s no haunted house. The only zombies, ghosts, or vampires in it are of the metaphorical kind. Nor does Lynch’s film stick to any of those stupid “rules” that Jamie Kennedy’s character expounds upon in Scream. In some cases, it actually upends some of the more common elements of modern horror. (Spoiler alert: The only girl that dies in Mulholland Drive is the final one.)

To say Laura Poitras is a gifted filmmaker isn’t news. She has already won a MacArthur Genius Fellowship following her work on 2010’s The Oath — a complicated, wonderfully ambiguous film, principally following Bin Laden’s former bodyguard, now a taxi driver in Yemen. It also won’t be news that CITIZENFOUR is a shoo-in to win next year’s Oscar for best documentary. Even if the film were not good, it’d still have the best chance of winning: Poitras was the first person Edward Snowden contacted after he decided to release his information. Poitras wrote articles about Snowden’s revelations for The Washington Post, for which she has already won the 2014 Pulitzer Prize for Public Service (shared with her teammates at The Guardian). The fact that CITIZENFOUR is also, in fact, very good just makes that inevitable Oscar seem much more well deserved.

At Criterion, Peter Cowie reflects on his time with Jacques Tati:

Jacques Tati, in his midsixties when I encountered him, was at first intimidating. He gazed at you with an owl-like intensity. But he proved most affable, and light years away from one’s image of a movie director; rather, with his neatly groomed gray hair and suit and tie, he resembled a distinguished banker or diplomat on vacation (although his burly shoulders reminded you that he had played for fun a boxer, a wrestler, and a tennis player in his early short films).