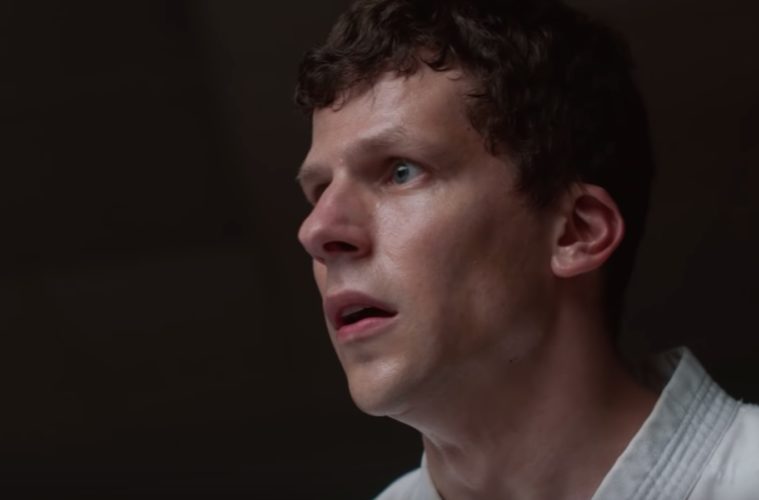 Following up his intense, darkly humorous cult drama Faults, director Riley Stearns returns this summer with The Art of Self-Defense. Starring Jesse Eisenberg, Alessandro Nivola, and Imogen Poots, the film follows Eisenberg’s character as a bookkeeper who gets attacked so enters into a karate studio to learn how to fight back. Ahead of a July release, a new trailer has now landed via Bleecker Street.

John Fink said in his review, “If Fight Club taught us one thing and one thing only it is to never underestimate the power of a bored single man with nothing to lose. And that is, in some ways, also the central thesis of Riley Stearns’ delightfully twisted The Art of Self-Defense, a pitch-black comedy starring Jesse Eisenberg as sad sack Casey, a lonely auditor who, in the film’s opening scene, is mocked at a distance in French by a couple. He, unfortunately, has become proficient in French, working his way through cassette tapes on his commute to work. He’s an easy and perhaps asexual target, turning to a meticulously photocopied men’s lifestyle magazine for advice and masterbatorial materials.”

After he’s attacked on the street at night by a roving motorcycle gang, timid bookkeeper Casey (Jesse Eisenberg) joins a neighborhood karate studio to learn how to protect himself. Under the watchful eye of a charismatic instructor, Sensei (Alessandro Nivola), and hardcore brown belt Anna (Imogen Poots), Casey gains a newfound sense of confidence for the first time in his life. But when he attends Sensei’s mysterious night classes, he discovers a sinister world of fraternity, brutality and hyper-masculinity, presenting a journey that places him squarely in the sights of his enigmatic new mentor. Audacious and offbeat, The Art of Self-Defense is an original dark comedy that takes toxic masculinity to absurd extremes.

The Art of Self-Defense opens on July 12.