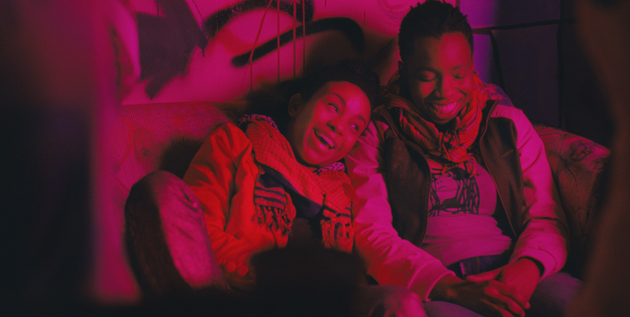 Pariah is a film that has slowly gathered steam since it premiered at Sundance earlier this year and is finally seeing limited release this week. I recently had a chance to see the film with little idea of what I was getting myself into — a strong recommendation and an upcoming screening will do that sometimes. This story of a young black gay girl raised by a mother that is devoutly religious and a father that is oblivious is a powerful reminder of the struggles societal pressure puts on those simply trying to find their place in the world.

Affecting no matter what your background, Pariah reminds us that adolescence is a delicate period that will shape the trajectory of our lives and young love and loss can come in many different ways. I had the opportunity to sit down with writer/director Dee Rees, who has made a powerful splash with narrative debut, and discussed how the film came about, the decision to bring back the actresses from her short, and the influence and importance of music in the film. The Film Stage: First off, I just want to say that I really enjoyed the film. It was very affecting. I heard Gwen [Reyes] mentioning in the lobby that even if you don’t have struggles with your sexual identity, it’s encompassing. It really makes you latch onto these characters.

Let’s talk about being in Dallas. Is this your first time in Texas? First time in Dallas? How’s it been going so far?

This is my second time in Dallas. I was here when I was in film school for some little, short film festival—I couldn’t even tell you the name of it. And in college, I knew people from Dallas. It feels a lot like Nashville, where I’m from. Yeah, it’s fine.

What does it mean to be part of the Lone Star Film Festival?

Well, it’s a huge honor and vote of confidence to be chosen as the closing night film. I’m just really glad that the audiences gave the film a chance. They came out and saw it last night. I think the city is really more open-minded and cosmopolitan than people give the state credit for. It’s been great to be here to kind of disprove the stereotypes. You brought back Alike and Laura from the short that you shot initially. Was there any difficulty in bringing them back? Was it pretty seamless?

Pariah‘s had a weird kind of evolution because it actually started as a feature film. I first wrote the feature back in 2005 and then I needed a short film to graduate from NYU, so I shot the first act. So we shot the short film, which is good because it helped get attention and raise money for the feature. But it wasn’t hard to bring them back. The actors were committed, they were really into it.

Pernell Walker is the actor that plays Laura, and after casting them for the short I knew that they were the ones to play this role. They had the chemistry and we had already done these exercises where I sent them in costume to Times Square so they could feel what it was like to be a gay woman in a straight environment. I sent them to lesbian clubs so they could feel what it feels like to be a gay woman in a gay environment. So they already had these shared memories together, so I absolutely knew I wanted to bring them back. And I kept checking back with them and gave them updates, so it was great that they were able to come back. Coming up as a writer/director, it seems really beneficial to have someone to lean on and bounce ideas off of. Do you have a confidant? A go-to person?

Yeah. The film’s producer, Nekisa Cooper, is my go-to person. She actually inspired me to write the script. I wrote it because I was going through my own coming-out process. My parents had flown in to have an intervention. I thought they were coming to visit so I’m buying theatre tickets and making restaurant reservations. [Laughs] But they were actually flying in to intervene. So we had a tough time for a while where I was trying to convince them that I was the same person I always was, and I was OK. That it was nobody’s fault.

And Nekisa was my personal support during that time and she’s the one that said, ‘You should write about this.’ And I was like, ‘Are you crazy? I don’t want to tell anybody about this. This is awful.’ And she pushed me to write about it and that’s why I first wrote the feature script. Anytime that I have drafts, she is always the first person to read my scripts and give me feedback because creatively I trust her to give me real feedback and she’s not going to give me feedback based on what’s commercial or what’s Hollywood or box-office-sellable. She’s all about how to tell the best story possible. And obviously with the naturalistic feel, that’s going to keep the budget low and that’s some of the reason that these films get made. They are low-budget feature films. You mentioned you coming out to your parents. It always seems like for these stories, a very key element is how the character ends up revealing to their parents; to their friends; whoever it may concern. For you, was it a gentle, casual process versus the film itself?

Well, for Alike in the film it’s funny because everybody knows everything. It’s like, everybody knows Alike’s gay. Everybody knows Arthur’s cheating. But everybody pretends not to know so there’s already this passive aggressive tension going on. For Alike, it’s not so much coming out as it is coming in to. She knows that she loves women. That’s not the question. But her question is how to be in the world. She’s got her best friend who’s super kind of masculine and telling her that she needs to wear the baggy jeans and the boots. And Alike’s not really feeling that’s her scene.

At the opposite side she’s got her mother who’s trying to put her in skirts and heels. And that’s not her scene either. So a lot of the film is Alike trying to figure out how to be in the world. For me, personally, that’s the same story I faced. I’d go to lesbian clubs and I’d be in jeans and a turtleneck, and not feeling like I was fitting in. So I came to realize I could just be myself. With my parents, I never experienced any physical violence, but I definitely had to be strong emotionally and be firm in who I was. And for Alike in the film, was that set up like that to make a narrative jump? If you have this slow, drawn out process it will add running time. Was it just an easy narrative jump?

No. It’s just who the character was. The back story I created for Alike was that she knew that she liked girls at a young age but then she met Laura maybe in middle school and they became best friends. Then Laura dropped out of school but they remained in touch. And Laura was her kind of mentor and took her under her wing into the world and showed her how to be.

But when we meet Alike when the story begins, that has started to chafe. Alike has realized that’s not how she is.That’s not how she wants to be and her question is how to find that. So she meets Bina. And it’s funny because Audrey introduces her to Bina to get her away from Laura, and, you know. Audrey brings about the very thing she’s trying to avoid. Although Alike is able to consummate who she is with Bina, she realized that there’s another way to be. She’s able to come as you are. You don’t have to put on a costume or dress for anybody; you can just be yourself. So even though it doesn’t work out, that’s what she is able to take from that.

Talking about Bina and Alike’s relationship, they really have a rough time at it initially. And then they hit it off based on music. How important is music in your own relationships and how important is it to this film in particular?

And it was really important to us to have an all female soundtrack to be the voice of the film. And all these music artists that we would be introduced to by the filmmaker friends or that we’d go see perform live and just asked to be a part of the film. So it’s a big part of the film and I like music. I like all types of music. The thing that Alike learns is that she doesn’t have to check the box of be one thing. She can have a diverse range of tastes and that’s OK.

I’d be remiss if I didn’t ask character name, Alike. Obviously, Dee Rees, that’s not all that out there. But Alike is very different. What was the decision behind naming your character that?

So Alike is a West-African name that means ‘Girl who drives out beautiful women.’ So in some ways Alike drives Bina out, and that’s why I chose it. Pariah is now in limited release.