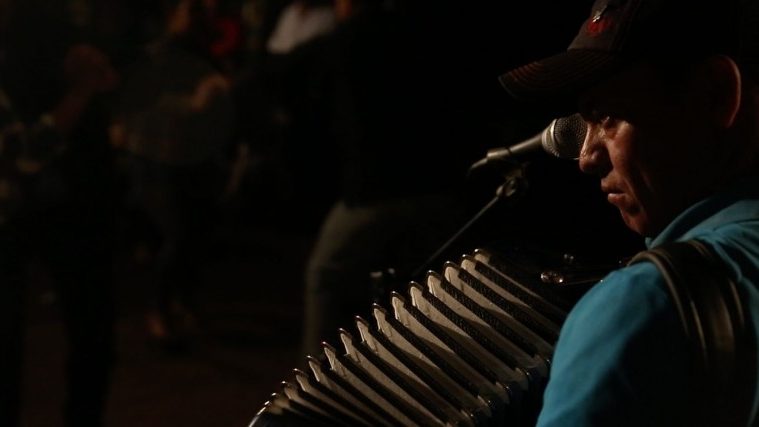 In ‘Olancho,’ First-Time Filmmakers Explore the Unseen Face of the Drug Trade

Anyone who’s lived in Honduras and left will tell you the thing they miss the most about the country are baleadas, a simple dish made out of a warm wheat tortilla filled with refried red beans and grated cheese. Some, like Olancho director Chris Valdes, prefer their baleadas “con todo,” i.e. with everything — also filled with scrambled eggs, sour cream, avocado, and an assortment of meats that can range from pork rinds to ground beef.  Before 2010, Valdes most likely had never even heard of a baleada, but that was the year he originally went to Honduras after seeing an ad for a teaching position in a private bilingual school in Olancho, the largest state in the Central American country that’s earned a reputation as the world’s most violent nation.

In Olancho, Valdes met Ted Griswold, a fellow teacher who had similarly found his way down there through a serendipitous online ad. The two would end up falling madly in love with the state, to the point where they decided to extend their teaching contracts by a year. Upon returning to the States and trying to reintegrate into American culture, the two realized how little people knew about their Southern neighbor and decided to return to make a documentary about one of the most popular olanchano bands, Los Plebes de Olancho. “At the time, it was when Netflix and other platforms were becoming ubiquitous in the US, so it seemed a documentary was a good way to tell the story,” explained Valdes.

Los Plebes de Olancho sing narco-corridos, folk songs influenced by Mexican grupera music, that tell tales of drug lords, their accomplishments, and the supporting characters around them. Narco-corrido bands are often sponsored by drug lords who love listening to songs about their achievements and hire the bands to play at private parties, turning them into artists who unwillingly become jesters in their courts. In Olancho, Valdes and Griswold focus on one of Los Plebes’ founders, Manuel Sinaloa, who speaks about how making music allowed him to find his place in the world.

The filmmakers are able to capture the Honduran dichotomy of trying to find beauty in a country where decapitated corpses are an everyday finding. “That’s something we both tried to be aware of: it’s the most violent country in the world and not a lot of news and information from Honduras come to the U.S. Honduras kinda lives in Mexico’s shadow, in a way. You hear about Mexican cartels and when you hear something about Honduras it’s 99% of the time negative and presented in a cold way. It’s either about the crime rate or the journalists killed,” added Valdes, “[but] we didn’t want to leave out of the documentary but we also wanted to show the beauty of the culture, the resilience of the people and even how different the Spanish is.”

So while there is an element of threat in Olancho, the filmmakers also show uniquely Honduran traditions, including an old man cutting sugar cane and sharing pieces with the local children, a pig being killed for a feast, and an iguana being roasted before being served as soup (there are no baleadas in the film). One gets a sense Valdes and Griswold’s nationality safeguarded them, and Valdes explains “a lot of the media that makes their way down to Honduras are things like action movies, so they think if something happens to someone from the U.S., the marines and army will show up instantly, the wrath of God unleashing — but in reality that’s not the case, so maybe that helped.” But he adds “the biggest asset we had was people knew us in Olancho from before, everyone in Olancho knows each other. So having taught over 100 children with families in Olancho helped a lot, people knew we were there to make a movie, we weren’t CIA or DEA. A lot of the cartels knew we were making a movie about their favorite band so they kinda loved that, actually.”

Besides showing the raw beauty of the country and highlighting the way in which music influences the lives of people in Olancho, the film’s best quality might be that it presents American audiences with a spin on the immigration story they’ve come to know. Rather than suggesting that people want to leave Honduras to achieve the American dream, the film reinforces the idea that many people are pushed out of their countries by forces bigger than them. “A lot of times people think immigration is only about the economic pull, but there’s also a push which we don’t see much of,” says Valdes. “There’s violence, gangs, and a lack of opportunities. Ted and I have worked in restaurants and a lot of the people in the kitchen are from the Northern Central American triangle, a lot of them are from Olancho, and they talked about how much they wanted to go back. Even some of them who’d been here for decades want to go back home, they want a house in the country, to have their own cattle. Who wouldn’t want to live in this amazing place? I hope people take that away from the film and how they think about immigration.” Here’s hoping.

Olancho is being presented at the Museum of the Moving Image as part of the Rural Route Film Festival, which, this year, is focused on singer-songwriters and will also screen Covadonga, La Barracuda, and Robert Altman’s Nashville.