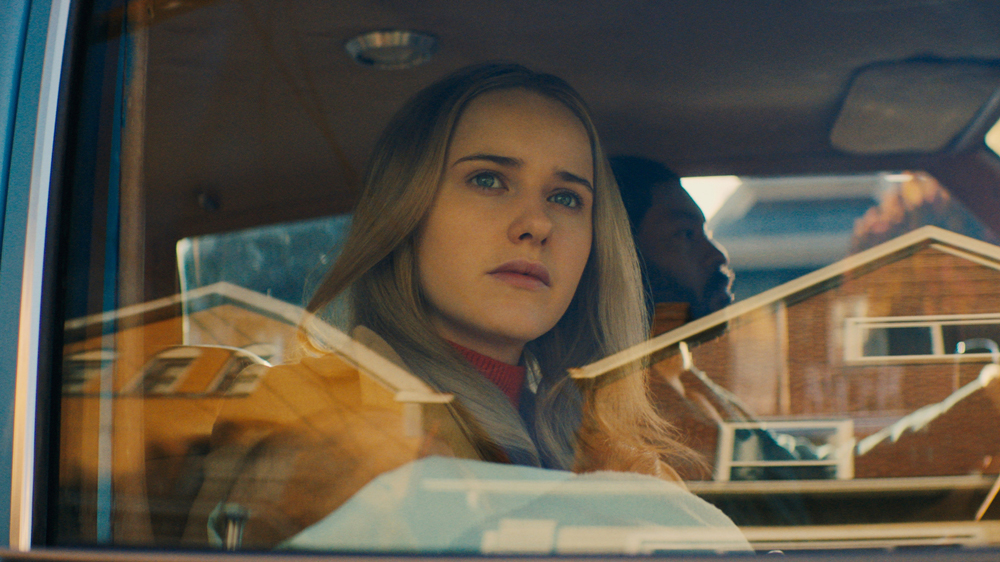 “I just wanted to take one of my most favorite and beloved genres of all time and tell the woman’s story inside of it,” writer-director Julia Hart told the Hollywood Reporter about I’m Your Woman, her spin on 1970s crime dramas. The film—which is set in the ‘70s, as well as adopting the cinematic aesthetic of the period—stars Rachel Brosnahan as housewife Jean, who is sent to a safe house with her baby after her criminal husband becomes a target. We’ve seen this story from the husband’s point of view a million times, women like Jean relegated to the sidelines and rarely revisited once they’re sent away. It’s a welcome perspective shift; unfortunately, Hart’s slow burn doesn’t have enough fuel to grab your attention beyond an intriguing premise.

I’m Your Woman is admirably small-scale: if you’re looking for the thrilling action-fest the trailer promised, this isn’t it. When we meet Jean, she’s sunbathing in her backyard, lamenting in voiceover her inability to bear children. The film wastes no time: within minutes, her husband Eddie (Bill Heck), comes home holding a baby, although he’s not forthcoming about where he found that baby. Soon after, a stranger, Cal (Arinzé Kene), arrives at Jean’s house at night and tells her she and her baby need to go on the run, but refuses to explain why, where to, for how long, or what Eddie’s done to get her in this mess. Jean is constantly operating under limited information, quite literally in the passenger seat of her own life, as Cal drives her to a safe house.

Through a series of small character shifts, the film tracks Jean’s gradual journey to the driver’s seat. She’s a character with little agency: she is shepherded from place to place, her life completely dependent on Cal. Cal drops Jean off at the safe house, leaving her there alone for weeks, the days filled with walking, cooking (badly), looking after her baby, and general paranoid worrying. Rachel Brosnahan is a watchable enough actress to carry a sequence like this on her back, but the character gives her little to work with. No agency doesn’t mean no personality, but Hart and co-writer Jordan Horowitz confuse the two by making Jean meek, mild, and not much else. We get the sense that she’s intelligent—she outsmarts the cops in an early scene—but I left the film with little sense of what Jean likes or wants.

Even when Jean starts to take control, she’s still one of the least interesting characters onscreen. The next stage of her journey is a second safe house—a cosy cabin in the woods—where she’s shortly joined by Cal’s family, including his headstrong, capable wife Teri (Marsha Stephanie Blake). More than anything, it’s Teri’s influence that brings Jean out her shell: in a pivotal moment, Jean insists on coming with Teri on a mission to find both their husbands, then nervously asks, “Am I coming?” Bluntly, Teri replies, “You already told me you are.” It’s a catalyst moment that kickstarts the final act, in which Jean starts to take action without permission. But although she’s certainly doing more, she doesn’t become more interesting as a character, especially compared to the compelling Teri.

It’s a shame, because Hart is such a smart filmmaker—and she’s crafted a film that looks both gorgeous and authentic to the period of filmmaking it’s trying to emulate. Credit should go to costume designer Natalie O’Brien and production designer Gae S. Buckley for their memorable work to create Jean’s world. Right from the opening scene, the film is a feast for the eyes: in a floaty pink dress, Jean wanders through a house full of decor that’s various shades of sunshine yellow. It feels so ‘70s, or at least the version of the ‘70s that’s been immortalised in pop culture. Hart’s economic shooting style—she lets takes play out, and shoots a lot of wide angle coverage, so her actors have room to breathe—also feels inspired by ‘70s filmmaking.

The problem with I’m Your Woman is that it only works as subversive feminist homage. I keep thinking about all the complicated women I’ve loved onscreen this year: Gemma Arterton’s delightfully misanthropic writer in Summerland, Kate Winslet’s thorny but insecure paleontologist in Ammonite, Radha Blank’s innovative yet bitter playwright-turned-rapper in The Forty-Year-Old Version, among others. These films are subversive in more ways than one, but also present us with lead characters who aren’t easy to get a handle on, who feel rich and lived in, and who we want to spend time with and learn more about. Jean is one-note. After two hours in her company, I hadn’t learnt much about her at all.