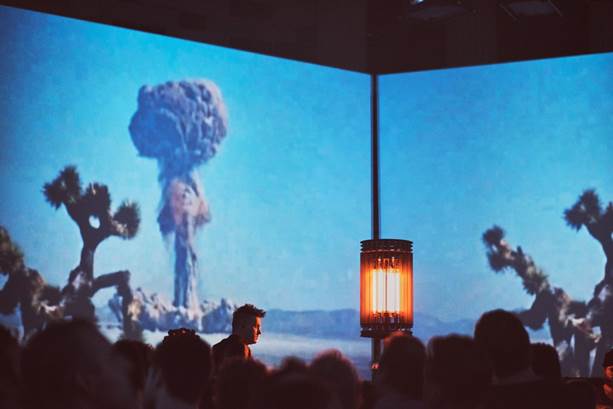 Once upon a time, André Bazin, in his satirical essay The Myth of Total Cinema, attempted to debunk cinematic gimmicks such as 3D, Magnascope and “Percepto” — tools of showmanship that, of course, have a tendency to be overused. Cut to the present: digital cinema has been widely adopted (a few 35mm hold-outs do exist, it should be noted), fueled first by 3D – the killer app, as David Bordwell cites in Pandora’s Digital Box. Continuing down this path, larger film festivals have embraced new forms of storytelling, including virtual reality, episodic content, and interactive media. In addition to Tribeca’s “Storyscapes,” the festival included a VR arcade as well as its stunning closing night performance the bomb. What follows is our account of the experience, along with select highlights from the festival’s VR arcade.

Directed by Smriti Keshari, Eric Sclosser, and Kevin Ford and staged by United Visual Artists, the bomb employs a medium somewhat familiar to visitors of Epcot: “circle vision.” (Our readers up north may recall O’Canada!, a 360-degree tour of Canada in the round.) Intriguing and powerful enough to sustain a single channel installation, the bomb is an immersive essay incorporating live elements, including lighting effects, fog machines, sound effects, and a live performance by trio The Acid in the room’s center.

Attendees at this weekend’s Gotham Hall performance were encouraged to wander around the building’s rotunda, flanked by eight large movie screens frequently showing the same images, some offering juxtapositions while others went black during the experience’s more somber passages. The effect is mostly a mosaic, as one image repeated another while panning. We’re introduced to the present, scary reality (North Korea is front and center) and history is peeled back to reveal images of the Manhattan Project from planning to testing to final execution.

Carefully calibrated, the experience is quite mesmerizing — part-concert, part-experimental-film. The accessible spectacle combined familiar stock footage circa the Cold War with new news footage from North Korea and elsewhere. It was most effective when we were confronted with a monster that has been created in our name. The film makes excellent use of archival materials and its space, building to a powerful, touching conclusion that magically stopped the audience cold it in its tracks, creating a powerful communal experience — just as all good cinema ought to.

From the collective to the deeply personal, Tribeca’s VR arcade offered a few unique perspectives and a sample of what’s to come in virtual reality storytelling, from gaming to filmmaking. The technology, despite having been with us for some time, still isn’t quite ready for primetime and I could never quite focus the Samsung Oculus headsets just right. So much for finding myself in an uncanny valley: I never found myself totally immersed.

The VR at Tribeca came in two varieties: 360 and interactive, either encouraging viewers to sit down or stand. The interactive varieties included Tyler Hurd’s awfully silly Old Friend, a virtual dance party where you’re front and center. Truth be told, the CGI was quite crude, and the far more evolved Invasion!, directed by a CG animation pro Eric Darnell (Antz, Madagascar), offered a silly story told with an impressive level of immersion as a bunny witnesses an alien invasion. I found myself in control of the mise-en-scène as my own DP, able to view the action from a low-angle while turning my head for a different perspective. Using a series of sensors, Invasion! certainly captured my attention as a proof-of-concept of something that could develop into a compelling storytelling device.

Killer Deal showcased narrative and horror storytelling, a bloody over-the-top affair from the director of Sharknado 1, 2, & 3 (Anthony Ferrante shares directing credit with Aaron Rothman and Irad Eyal). The short film stars Ian Ziering as a man attending a machete conference. Devices include blood splatter, darkness, and misdirection to creative temporal jumps in its narrative effective direct a viewer’s gaze in a 360-degree space. I’m sure this type of filmmaking will be a common application of this technology and Killer Deal is nothing if not an effective and silly experiment.

The most exciting work in the VR arcade is Stephanie Riggs’ Kanju, a wonderful, brief documentary about African economies that uses 360 degrees (along with traditional narrative) like an OmniMax (IMAX dome) film. Riggs focuses your attention front and center when required while allowing your mind to wander in a series of immersive scenes, from historic speeches, boat rides that an everyday affair, to the set of a Nollywood film. Kanju demonstrates VR storytelling’s application as a proxy for the large-format educational documentary. The New York Times has also gotten into the VR game with its own app and a project presented here as Seeking Pluto’s Frigid Heart, a slick CGI animated film that was engaging if a tad dry.

The takeaway from Tribeca’s Virtual Arcade is that virtual reality has certainly made leaps from its primitive days such as the CD-ROM was an improvement over the floppy disk. VR is currently in an SD DVD phase; with the availability of faster hardware (and smart phones), I imagine it won’t be long for it to jump to Blu-Ray and then DCP-level quality, so to speak. The experience is a kind of personal immersive cinema that edges us closer to total cinema — not that such a state free from mediation is ever possible or, for that matter, desired by audiences.