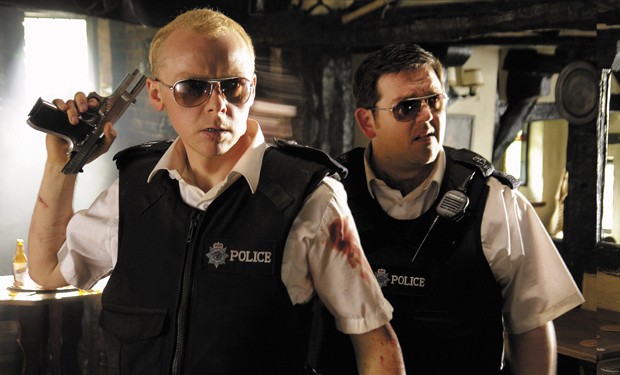 Hot Fuzz is a true parody film. A lot of entertainment that’s created and sold as “parody” is, in fact, just an example of whatever genre or stock plot it’s targeting, but with jokes. Witness the sorry slew of films made by the Friedbergs, Seltzers, and Tiddeses of the world. This is easy to forget because the final act delivers a nonstop barrage of gunfire and explosions, but Hot Fuzz is comparatively light on action for most of its running time. It’s also easy to forget because it unquestionably feels like an action film for the duration, deliberately applying the Tony Scott school of editing to everything from paperwork to pen-clicking. Yet most of Hot Fuzz is a slow-burn build-up revolving around the more old-fashioned, decidedly more British genre of the provincial murder mystery.

Writer-director Edgar Wright and co-writer / star Simon Pegg conceived Hot Fuzz out of a desire for the UK to get its own big ‘80s-style action cop film. Historically, detective stories in print and TV have dominated that country’s pop-culture crime corner. (And since this film was released, we’ve seen the popularity of British detective TV go international, thanks to the likes of Sherlock and Netflix.) But hyper-competent rogue police officers getting into massive gunfights and constant chases, cracking giant criminal conspiracies, and clashing with cigar-chomping superiors would feel far too outlandish in such a setting.

And Wright and Pegg double down on the absurd clash by placing their pastiche in a quaint country village. As perhaps the foremost director of comedy working today, Wright has a knack for purely visual humor. He wrings endless material out of putting guns into the hands of wool-clad middle-aged people without ever exhausting it.

Hot Fuzz continually makes punchlines of either charging mundane situations with high energy — like a chase for a supermarket thief that’s interrupted by moms strolling their babies and a swan – or setting up archetypical action beats, only to cut them short – think the tremendous fake-out with a shed full of munitions that looks ready to explode, only for the characters to run out and… nothing happens. This can be seen as a “test run” for how The World’s End holds off on any genre elements until around a third of the way through, swelling with purely character-based tension right up until the point when it would be too much to take. Of course, Hot Fuzz tips its hand from the beginning that there’s more afoot than is apparent to (most of) its characters, and that all the deaths happening around the small town of Sanford are indeed not freak accidents.

The continual subversion and frustration of action clichés also channels the mindset of Pegg’s character, Nicholas Angel, a star London officer forcibly relocated to picturesque Sanford and addled with boredom by the lack of crime to fight. Angel is every small-town denizen driving themselves mad with fantasies of a more exciting life. He is essentially Wright when he was growing up in his own small town and in love with genre cinema – made all the more evident by the meta aspect of how the movie was shot in Wright’s hometown of Somerset. Hell, he even held a job as a youth in the supermarket that’s used as an important recurring location. (“I love it, but I also want to trash it,” he once said in an interview.)

The films of the Three Flavors Cornetto Trilogy all feature arrested development as a plot point, and it appears here in a more complicated way than perhaps even in The World’s End — though certainly not in as dark a way, given how, in that film, a refusal to grow up literally destroys civilization. After Angel spends the entire story refuting the childish, action-movie-influenced ideas of his partner, Danny Butterman (Nick Frost), embracing that un-modern, unregulated form of policing proves to be empowering, and the proper way to combat the villains. And the movie ends with Angel and Butterman in full-on cowboy cop mode to respond to nothing more than “some hippie types messin’ with the recycling bins at the supermarket.” Which is a goodly larff but also scary when you think about it. After all, if they’re now sheriffing the town with such tactics, have they merely supplanted the fascistic Neighborhood Watch Association rather than defeated it?

That brings me to the oddest way this film has aged. And I’m sorry to bring contemporary politics into it, but, for God’s sake: main villain Frank Butterman (Jim Broadbent in one of the greatest against-type castings of the decade) actually says that the NWA’s motivation behind its covert murder campaign was to “make Sanford great again.” NIMBY conservatism in the middle class is, of course, an evergreen subject, but it’s taken on a new, scarier heft since 2016. While the political specifics of the modern situation are missing — immigration doesn’t come up, although itinerant Romani (“filthy Gypsies”) are at the root of Frank’s evil origin story — the NWA emblemize the core of Brexit. They want things to remain precisely as they are, and react to the slightest thing that’s out of place with utmost belligerence. Am I saying the proper response to UKIP is to drop-kick them in the face? Maybe.

After codifying the cinematic style he established with his TV series Spaced in Shaun of the Dead, Wright perfected it here by taking the speed from 40 to 100. This is as lightning-fast as a film can move while maintaining comprehension and letting its jokes land, and at the same time it crams in literally hundreds of smaller moments waiting to be caught on a rewatch or appreciated in a freeze-frame. I can appreciate it an entirely different way than I did as a teenager, even if the giddiness I get from a man’s head being exploded by a falling steeple is the same now as then. Hot Fuzz is perfect.