‘Hostel: Part II’ and the Monster of Neoliberal Late-Capitalism 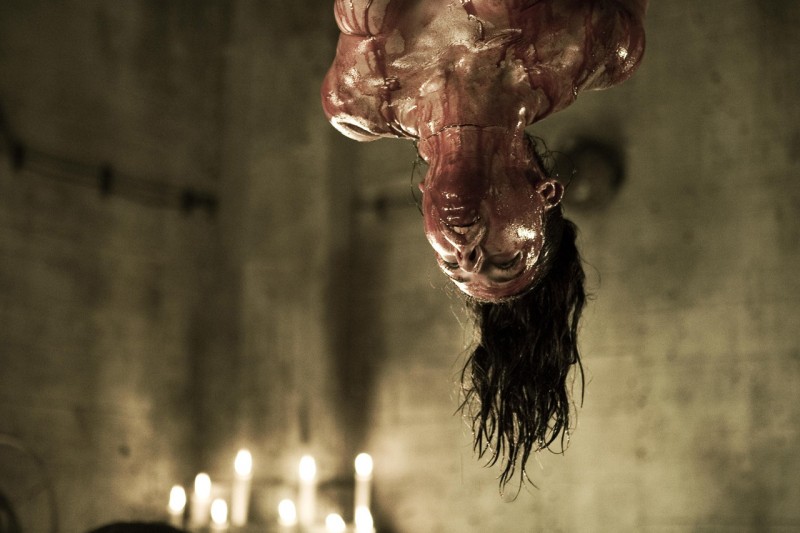 This incendiary context set the stage for Roth’s Hostel: Part II, which acts both as an inversion and political expansion of its predecessor. Where Hostel offers a glib satire of homosocial desire among hyper-masculine males, the sequel focuses on a trio of young women. If Hostel reacts to the Abu Ghraib photographs by leveling a critique against unchecked western military imperialism, Part II condemns rampant late-capitalist neoliberalism at large. In 2007, the sequel’s political resonance was lost amidst blanket arguments against “torture porn” (a term that Edelstein’s article leaves unfortunately broad and open-ended); in 2017, its nastily incisive observations remain too relevant to be brushed aside.

But Roth’s films are not simply exercises in pessimistic wallowing. Following in the tradition of the first Hostel, Part II amplifies its horrifying political insights with dark humor. It uses these most emotionally charged of genres, horror and comedy, to attribute its subject matter with physical reaction, seeking visceral impact above all else. If subtlety is what you seek, Roth is probably not the filmmaker for you — here’s a film that uses castration to symbolize resistance against violent masculinity; that shows human bodies turned into consumable and disposable objects in order to illustrate capitalism’s brutal exploitation of animals and people alike. Unlike the first entry, Part II’s point-of-view is not restricted to the victims. Instead, the film is divided into two plot-lines — the first sees the aforementioned group of women vacationing in a small Slovakian village, and the second follows two wealthy, white American businessmen who win a bid to “purchase” the unknowing women for torture and murder.

By extending its narrative reach to include the Hostel “clients” as well as its prisoners, Part II deepens its moral and political insights. The audience is asked not only to empathize with the victims, but also to recognize its own complicity as spectators. This broadened perspective also substantiates Roth’s sustained homage to Italian horror auteur Sergio Martino; like Martino’s excellent Torso (1973), Hostel: Part II oscillates visually and narratively between different subjective positions to disturb the viewer and to complicate their political assumptions. Part II makes its connection to Torso blatantly clear, going so far as to play an early scene as a direct reversal of Torso’s introduction. Where Martino’s film begins with an inquiry into the objectification of women in art history, Roth’s stages a nude male model for the leading trio of women to sketch. Edwige Fenech, Martino’s career-long collaborator, plays the art instructor; “Hands on your pencils, boys,” she says, when female model Axelle (Vera Jordanova) takes the male’s place.

This genre-specific self-awareness works in favor of political commentary. Following in the tradition of Martino’s masterpiece, Hostel: Part II doesn’t use horror as an escape from reality but rather as a means of confronting it. In 2017, this method of genre filmmaking remains generally unpopular. While some exceptions (e.g. Anna Biller’s The Love Witch and Jordan Peele’s Get Out) openly contend with relevant political problems, the majority of mainstream American horror (e.g. the Paranormal Activity and Conjuring franchises) continues following a trend of old-school paranormal superstition. By comparison, combative genre cinema such as Hostel: Part II urges American audiences to reflect on horrific sociopolitical realities. In 2017, its plot holds truer than ever — with boorish, chauvinist tycoon Donald Trump now serving as President of the U.S.A., capitalist enterprise and political leadership are more explicitly linked than ever. In 2007, Roth already saw the scariest machinations of neoliberal capitalism at work.

While addressing his film’s lofty political throughlines, the writer-director also lends Part II more formal flourishes than its predecessor. This sequel offsets its Martino references with coyly Gothic imagery: one scene finds a client lying within a ring of candles, scything her suspended, nude young victim before bathing in her blood, Elizabeth Báthory style. Part II also maximizes on architecture and locales, but uses them as defamiliarizing spaces rather than geographical markers. Scenes in misty Slovakian spas play out as placeless, sensual daydreams, and an anachronistic music festival echoes the first film’s visual allusions to the Minotaur myth. Specific Slovakian characteristics are largely left in the background because, like its predecessor, this film is much more about its protagonists’ perceptions of Europe than Europe itself. Whitney (Bijou Phillips), one of the focal vacationers, demonstrates this point-of-view: she conflates Bosnia with Slovakia, and calls local Miroslav (Stanislav Ianevski) “Borat.” (Fittingly, comedian Sacha Baron Cohen uses the titular Borat of his 2006 satirical mockumentary to tease out evidence of widespread American ignorance.)

Yes, there is plenty of humor in Hostel: Part II, but it never allows us to forget its primary vocation: fear. In the tradition of pure horror cinema, it denies us a happy ending. While the third act briefly hints at simplistic moralizing, it quickly steers away from that course. Ultimately, its resolution arises bluntly from financial negotiation, and it concludes with a gang of street children playing soccer with a decapitated head. Some of the victims may get out alive, but what good is survival if it only results from torturing the torturers? In 2007, the film’s box-office earnings and critical reception suggested a pale and unsuccessful sequel. A decade later, Hostel: Part II stands out as one of the most urgent, combative, and complicated American horror movies of its time.