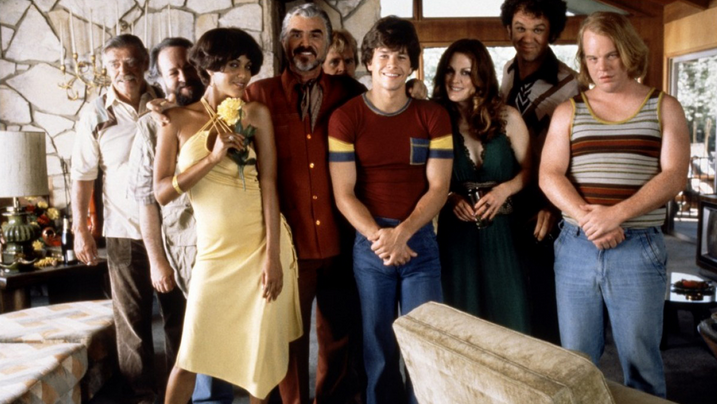 History of ‘Boogie Nights,’ Friedkin on ‘The Babadook,’ Death of Mid-Budget Cinema, and More At Grantland, read an incredible oral history of Boogie Nights:

Boogie Nights began as a teenage boy’s wet dream. Nearly a decade before its 1997 release, it was a fantasy to chase. The year was 1988. The boy was a precocious, plotting 17-year-old named Paul Thomas Anderson. He was growing up in Los Angeles’s San Fernando Valley, obsessed with the studios all around him. He wanted in and hustled plenty — sneaking onto sets, working a Betamax camera from the age of 12, filming everything — but he also gained entrée from his father, Ernie, who was famous from his voice-over work for ABC on shows like The Love Boat. The Andersons had a pool — where funny-guy actors like Tim Conway and Robert Ridgely frequently lounged, cracking jokes and pouring drinks — and their own Shetland pony. The absurd and the domestic were one and the same. At HitFix, William Friedkin explains his love for The Babadook:

It delivers on what it’s supposed to. It’s not only the simplicity of the filmmaking and the excellence of the acting not only by the two leads but it’s the way the film works slowly but inevitably on your emotions. And you have to be completely shut down I think not to be at least very moved by it in a terrifying sense.

At Flavorwire, Jason Bailey on how the death of mid-budget cinema left a generation of iconic filmmakers MIA:

Back in the 1980s and 1990s, when Waters and Lynch were doing their most commercially successful work, it was possible to finance — either independently or via or the studio system — mid-budget films (anywhere from $5 million to $60 million) with an adult sensibility. But slowly, quietly, over roughly the decade and a half since the turn of the century, the paradigm shifted. Studios began to make fewer films, betting big on would-be blockbusters, operating under the assumption that large investments equal large returns. Movies that don’t fit into that box (thoughtful dramas, dark comedies, oddball thrillers, experimental efforts) were relegated to the indies, where freedom is greater, but resources are far more limited. As Mad Men’s Matthew Weiner put it, “Something happened that nobody can make a movie between $500,000 and $80 million. That can’t be possible.”