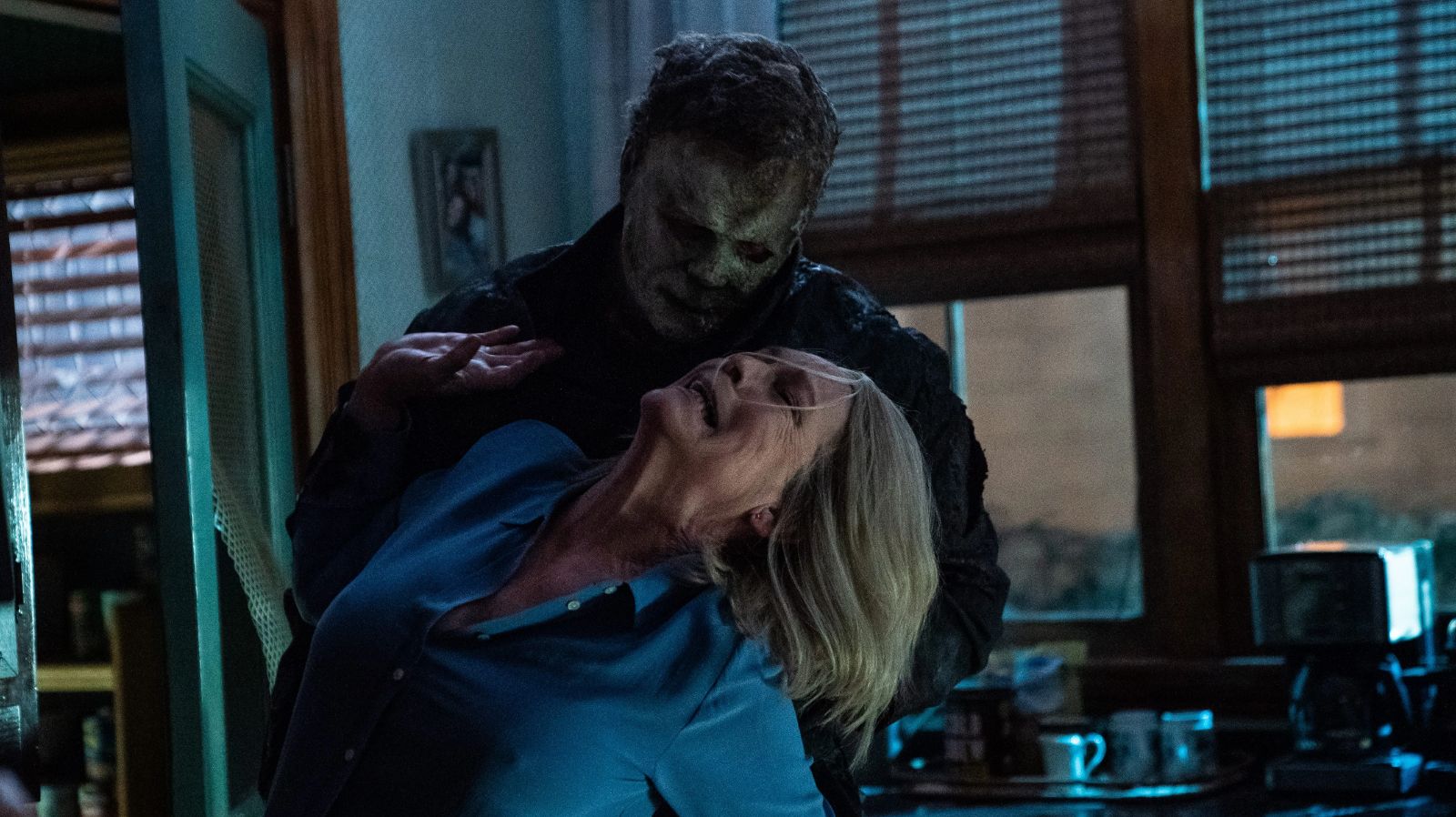 This time last year, while doing press for his rather dreadful Halloween Kills, director David Gordon Green promised the final installment of this rebooted trilogy would tackle both “the pandemic and peculiar politics.” Well: a year later, with Halloween Ends now upon us, this writer can say that we don’t in fact have a single acknowledgment of COVID or some dramatization of the town of Haddonfield, Illinois, struck by QAnon fever. Perhaps representative (should you take Green’s initial statement at face value) of how this supposed franchise-capper reeks of an insecure creative team tussling over ideas and themes, it can be said Green’s misfire might at least keep you guessing what the hell it’s actually trying to do for a good portion of the runtime.

Beginning on Halloween night a year after the events of the previous two films, we’re introduced to Corey (Rohan Campbell), a 21-year-old student babysitting for an affluent couple. Despite the couple’s sensitive child being rattled by all the news of Michael Myers’ killing spree, things initially seem to be going well during Corey’s gig—until a game of hide and seek leads to an accident that results in the child’s death. Cutting to what seems a year (or two? three?) later, the young man is a pariah in Haddonfield, many citizens taking the stance that what happened was an act of murder instead of accident, thus making him the new “boogeyman” in place of the disappeared masked villain. Yet after being harassed by the members of a high school marching band (who all strangely sound like they’re from some neighborhood of Boston) and having to go to the emergency room, he finds himself in the orbit of (now-medic) Allyson (Andi Matichak) and her grandmother Laurie Strode (Jamie Lee Curtis). A romance begins blossoming between the two young people and some happiness seems possible despite their trauma-stricken states.

This film’s town-portraiture first half finds Green back in the territory of early indie dramas such as All the Real Girls or Snow Angels; but notwithstanding a few quirky types picked for bit roles, most of it falls flat from poor dialogue and thinly sketched characters. Yet things kick into high gear when Corey comes across Michael Myers in a sewer after a rough encounter wherein the marching-band teens flat-out leave him for dead. He (confusingly) seems to absorb the evil within the villain just from being briefly strangled. He goes on his own killing spree that sees him both turn into a leather jacket-wearing, motorcycle-riding bad boy who has his own moody synth-pop theme and the new Myers, donning the mask and butcher knife. Suddenly getting into the nerd-turned-supernatural villain territory of ’80s VHS trash like 876-Evil or Trick or Treat, one has to applaud the series for making a borderline inexplicable heel turn—likely Green, Danny McBride et al. were aware of just how much the previous installment was treading water as yet another Myers kill-fest.

Corey’s path points to Ends‘ text being vaguely about cancel culture, or rather the finger-pointing and scapegoating that’s sadly become part of our aggrieved society. The franchise, which at least on its press tours has seen its star Curtis cement the films as emblematic of whatever Hollywood liberals are thinking about at the moment––evoking the #MeToo movement for the first, Trump-supporter rage for the second––certainly takes an interesting turn here. If anything their legacy will mark how even the dumbest hyper-slashers felt the pressure to clumsily address their moments, and maybe this film represents a looking-inwards from factions of the elite center-left about their own practices.

Unfortunately Halloween Ends can’t stick the landing of its bizarre twist, inevitably making its climax the final showdown between Laurie and the original Michael, which feels like it was one of the few things remaining from an initial draft before they returned to the drawing board. And it’s here that the political and aesthetic failings are revealed. After all, Green positioned his initial reboot as a back-to-basics counter to Rob Zombie’s own reinvention full of backstory and bold character development. Yet why should a confrontation with evil be as reassuring and sentimental as it is in this finale? Is grinding up Myers’ body really all the town needs to get over their trauma? It wasn’t necessarily a profound intuition on the part of John Carpenter to understand the terror of the banality of evil when making his original, but certainly he had enough integrity as an artist to not so condescendingly pat audiences on the back.

Halloween Ends arrives in theaters and on Peacock on October 14.