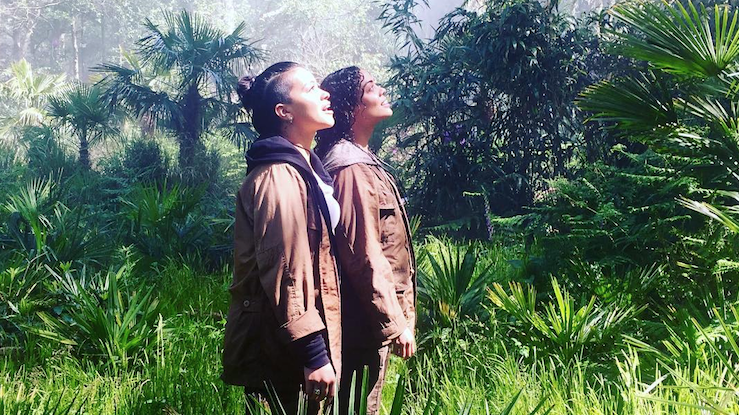 Following up his Oscar-winning Ex Machina, Alex Garland is returning to sci-fi for his next film, an adaptation of Jeff VanderMeer‘s novel Annihilation. Starring Natalie Portman, Gina Rodriguez, Tessa Thompson, Jennifer Jason Leigh, and David Gyasi, the film features a group of women — an anthropologist, a surveyor, a psychologist, and a biologist  — who embark on a dangerous, secret expedition where the laws of nature don’t apply.

With filming now nearly wrapping up, today we have collection of images from the cast and cinematographer Rob Hardy (who shot Ex Machina) that show off what looks to be the perfect location for those that have read the book. He also states that the “only film to appear in the research library” for Annihilation is none other than Andrei Tarkovsky‘s sci-fi classic Stalker. Being that it’s also “a metaphysical journey into an area where the laws of nature do not apply,” this is certainly a fitting comparison, judging by VanderMeer’s nature-focused, mind-bending journey into an unknown abyss.

See the images below, along with some posts about inspirations behind the film’s look:

Lit with the magic of movie making, on Annihilation, with my sunshine @hereisgina ?? . Photo by director Alex Garland

wrapped on Annihilation. quite possibly a very beautiful film. can’t wait [for you] to see.

Landscape with night around it.

A big thank you to @chivexp for hosting the BSC feed for the last few weeks. An invaluable, insightful & beautiful visual monologue. Our next host will arrive shortly. In the meantime, a brief meditation on an attempt to capture night as it appears to the eye. Always, at least to me, one of the apparent holy grails of cinematography. How does one capture the monochromatic, sourceless effect that the eye always sees? Here is a image taken on the set of ANNIHILLATION – not a frame grab from the film itself, but a reference still for a DI at some point in the near, or distant, future. @bscine #bscine @rdhardy

A quiet tribute to the outer peripheries of a dressed set. Beautiful, austere and elegant, yet largely ignored in the face of brutal time restrictions and other seemingly arbitrary reasons, but somehow defiant of the fact that it will never appear in the film. #bscine @rdhardy

Zone (Version 2) – a preparatory image taken for the current Alex Garland project, ANNIHILATION. One of a series of landscape studies. The focus here is on finding colour refractions and anomalies in the surrounding air – #bscine #alexgarland @rdhardy (I’ll be jumping in for a couple days until our next host becomes available) ….

A preparatory image forming part of our research library for ANNIHILATION. This close up of a Bonsai was captured on a trip to the Botanical gardens in Brooklyn. Elegantly psychedelic, playfully surreal, and microscopically deformed with a twisted relentless intention. #bscine #alexgarland @rdhardy

Another image from the research library for ANNIHILATION – Umberto Boccioni’s ”States of Mind 2: Those who Leave”. The theme carries relevance, as does it’s penumbral light sitting heavily over the unnatural ‘natural’ landscape – An effortlessly atmospheric painting in spite of the Futurists’ questionable manifesto. #bscine #umertoboccioni @rdhardy

An image from Andrei Tarkovsky’s STALKER. The only film to appear in the research library for our current project. For obvious reasons too numerous to mention here. A metaphysical journey into an area where the laws of nature do not apply. #bscine #stalker #alexgarland @rdhardy

As we await official images and footage, check out the Amazon synopsis below. Annihilation will likely premiere in 2017.