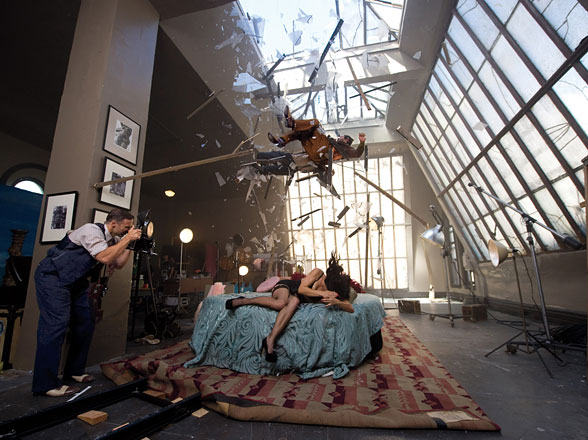 The first weekend of this month brought one of the most dismal in recent box-office history and it was once the spot Ruben Fleischer‘s 1940s Los Angeles-set Gangster Squad was set to open. As we know, due the film’s climax resembling the  tragic Aurora shooting this summer, the film was pushed back, reshoots went underway and now we’ve got the new vital scene taking place in Chinatown.

Although it’s skipping this awards season, Warner Bros. is still kicking up marketing for its early January bow and we’ve got a batch of neat behind-the-still scenes from the film. Complete with commentary from director Ruben Fleischer, we get some details on a few key scenes and more. Check them out above, kicking off with a shoot in Sylmar, and the rest below from W Magazine for the film starring Josh Brolin, Ryan Gosling, Nick Nolte, Emma Stone, Anthony Mackie, Giovanni Ribisi, Michael Peña, Robert Patrick, Josh Pence, Frank Grillo, Mireille Enos and Sean Penn. “This was our very first day of shooting. Josh Brolin plays John O-Mara, a hard-nosed cop headed into the hornet’s nest—mob boss Mickey Cohen’s HQ. He’s trapped in an elevator with two thugs, but he fights his way out.” “A police chase ends with a crash through a skylight and directly into this studio during a pinup shoot with Bettie Page (played by Nancy McCrumb).” “In this scene, Ryan Gosling’s character, Jerry Wooters (a cop), introduces himself to Grace Faraday, played by Emma Stone. Obviously they have great chemistry.” “Me and Nick Notle, who plays the police cheif, Bill Parker. In the script, he’s likened to Richard the Lionheart. Only Nolte could pull that off.” “One of my favorite locations: Clifton’s, a real restaurant that’s been in Los Angeles since the thirties. A time warp.” “A turning point for Gosling’s character: A little kid gets killed by Cohen’s assassins in a shoot-out. This is when he decides to get on board—as it says in the script, ‘the long-sleeping cop comes to life.’”