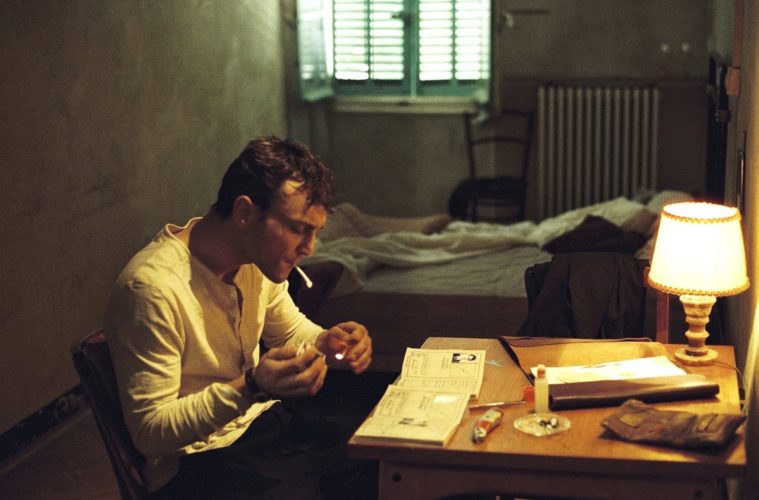 Franz Rogowski on Playing a Ghost in ‘Transit,’ Disorienting the Audience, and Terrence Malick’s ‘Radegund’

In Christian Petzold’s Transit, Franz Rogowski plays a hollowed-out European refugee who has escaped from two concentration camps. He assumes the identity of a dead novelist as he tries to escape to safety through Marseilles in 1942. Rogowski’s posture and sunken eyes, aided by makeup and Petzold’s distinct lighting, give us the impression of a man withered in a world of crisis. It’s a quiet performance yet it fills the screen with grandeur, thanks to the physicality and commitment of the actor. In a New York Times feature, Petzold called him “a great actor who is able to balance sadness and confidence, coldness and empathy like a dancer.” Before Transit, Rogowski was seen in Victoria (2015) and played Isabelle Huppert’s son in Michael Haneke’s Happy End (2017).

On a recent visit to New York to promote Transit, we got the chance to interview the actor. He is mild in manner and quiet in voice, yet maintained intensity as he passionately spoke about Transit, how he chooses projects, and when Terrence Malick’s Radegund might come out.

The Film Stage: Were you fan of Petzold’s ’s work before Transit came your way?

Franz Rogowski: I was aware of his work. My parents had all his movies. He was my father’s favorite German director. I was curious to meet him but also very nervous somehow. When we met, we smoked a packet of cigarettes and talked for more than an hour and agreed that we have to do this movie.

You got along immediately. How was it on set with him?

He’s a guy that likes to prepare with deep and profound research. He gives you a lot of references. He’s like a walking encyclopedia of cinema, kinda freaky actually. It was very inspiring. And at least once a week we would have a cinema evening: we would all sit down on a roof terrace and watch a movie, usually one of his favorite movies. All of these movies had something to do with the work we were doing.

What were some of the films that you watched?

Casablanca was one. To be honest I remember moments from the movies but I don’t really remember the names. I’m really bad with names.

Your character is a cipher with unclear allegiances. We are never sure of his motives. How did you prepare to play that?

I told Christian in the beginning I can’t play a refugee or pretend to know how refugees really feel. I grew up in the 1990s in West Germany; there was no border, no war. I was in a safe environment. It would be wrong to pretend that I know how a refugee feels. Christian agreed; the character we created is based on the novel. The great thing about him is that he’s a drifter. He doesn’t leave a home or lose a job, a girlfriend or a boyfriend. He has no roots. How did I prepare? We talked about these things and how we wanted to create a character that is a bit like a ghost, like a figure lost in time.

How do you play a ghost? Is there something physical that you do?

You gotta look deep inside. We all have a ghost inside. [Laughs.] Then you to tickle it to come out. The thing about being in a good movie is that the actor doesn’t do it on their own. It’s the script, it’s how Christian combined figures from the novel born in 1930s and puts them in today’s Marseilles, a city on the edge of Europe dealing with immigration. This already creates a ghost situation where this character has lost his own time. I tried not to comment too much on the fact that the character is a refugee. I tried to play a person and not a refugee. I didn’t try to play a ghost, but I tried to be in the zone being there, staying there, wanting to flee, coming from somewhere, wanting to leave, loving this woman but at the same time not really needing her and that creates a certain feeling of being lost in time and space. Maybe ghost-like.

What did you think of juxtaposing the contemporary setting with the period story? How did that dissonance affect your performance?

That was the reason I wanted to do the movie. Christian’s work and the idea for this new movie was what convinced me. It inspired me and I think it inspired him too. To play this old character in today’s Marseilles. But it was so hot in Marseilles, 40 Celsius, how do you say in Fahrenheit?

It makes the film different and gives it this topicality to current events but it also would have confused the audience. Did you think about that or talk about it with Petzold?

I think we liked confusing the audience. It’s good to be a bit confused and then to start thinking.

Yes, everyone has their personal moment of discovery. When they see a skyscraper or a mobile phone. For me it was when they are at the house by the harbor with Marie and her doctor boyfriend and you see a skyscraper in the window. It was so weird but at the same time it was okay. It’s a little bit scary because it could all happen today.

Yes, it is happening. People were trying to escape Europe then and now they are immigrating there.

You’ve made this movie a while ago. At the time you’ve made choices on set but didn’t actually see how they looked. Were you surprised by the final film?

I was surprised by the combination of these fruity Mediterranean colors and a voiceover that was rather dry and down to earth, almost like reading a manual. I think it was the first layout that they used, recorded with an iPhone. It was not meant to be the final version. I’m surprised they chose it. There is this music motif that keeps coming back, the composer arranged it with 20 musicians. Christian chose the first layout which is very fragile. I was surprised and touched by that decision.

What do you look for in choosing a project; the director, the part, or the story?

It’s a combination of the three. I’m looking for parts that I can embody and want to embody, within stories that inspire me. That’s what I try to do. I try to read and meet people to understand their vision and see if it could be me or if it should be me. I spend more time reading scripts and thinking about stories than acting.

I understand that you were a dancer and have a thriving career in the theater. Do you prefer theater or film?

I don’t have a preference. I don’t have favorite things. There are different realities and different contexts. I want to grow and interact with people and have different experiences. I come from the stage, from performing arts, from contemporary dance, but for right now making movies is the most important.

English-language cinema or Hollywood can expand your distribution footprint. Are you interested in making movies here?

It could happen, it may not happen. Honestly, if I get a script for the next Marvel movie I would read it like any other script and see if I like it or not. I’m very thankful that our movies are seen in the United States. People saw Victoria and Happy End came here. I love being in  New York, the culture of moviemaking comes from the United States. In the beginning, it was propaganda. It’s still propaganda but there’s some amazing stuff and there are some American directors that of course I’d love to work with, not because they are American but because they make incredible movies.

I read that you choreographed your karaoke scene in Happy Ending. Is it true and how did you do it?

I tried to. I dd it with a friend of mine. But when Michael saw it, he became a choreographer and did it himself. It is the material from the original video. It is a karaoke bar and Pierre is not a dancer so it makes sense that he’d get his moves from the original Chandelier music video. The drunken interpretation of someone who has seen the video a couple of times and prepared a little bit at home. I have to admit it was Michael’s choreography though.

You are in Terrence Malick’s Radegund. What can you tell us about it?

No one knows what it is going to be. It has been two and a half years since production. I’m not sure. It might finish tomorrow, it might take another two years of post-production. No one knows. He doesn’t feel the pressure. I think he works with several editors who make different versions. He’s a director who creates spaces rather than produces scenes; his editing style is like that. A bit like music. He needs the time that he needs.

To end, can you tell us a story from the set of Transit?

There was one day when we had a very good day filming. I bought myself a bottle of wine and went to the harbor. I found a good spot, opened the bottle, and started drinking the wine. In the distance, there were some guys doing acrobatic tricks. I got really fascinated by them. Then a terrible thing happened, their dog died in the water. A pitbull. It was a big drama, they took him out. They tried to resuscitate him. It was horrible but I couldn’t do anything since I was on the other side. In the end, the owner left crying and carrying his dog. I was in shock. I needed to smoke a cigarette. Then I found out my cigarettes are gone, my money is gone, my bag is gone. Everything is gone. This dog dying scene turned out to be the best theater piece I ever saw in my life. They probably just put a dead dog in the water, got everyone’s attention and stole their stuff. I found myself that night in the embassy and at the police station without papers, without identification. I was in the same situation as Georg. The movie became reality.

Transit is now in theaters.