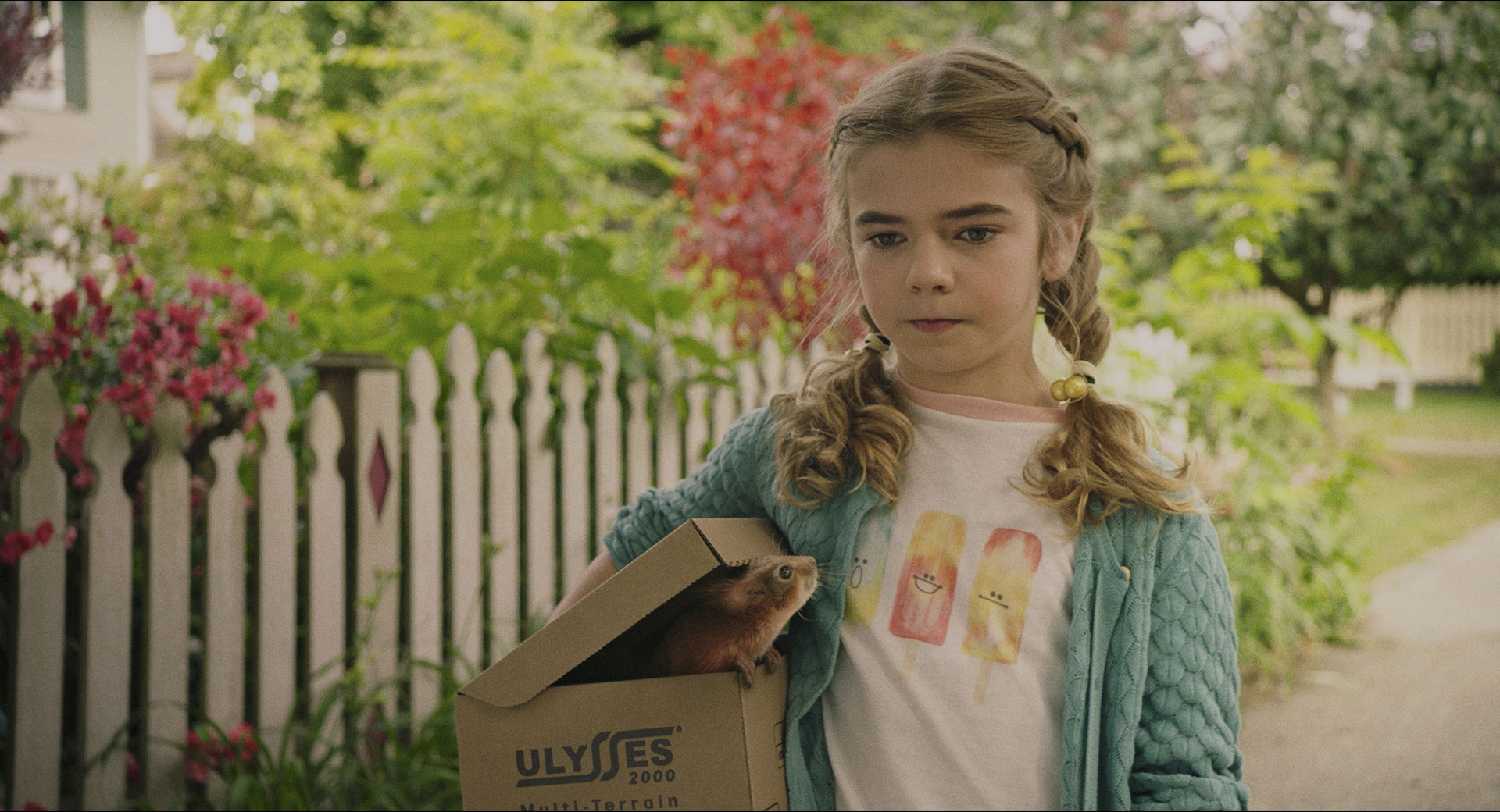 The magic Kate DiCamillo imbues within the pages of Flora & Ulysses is infectious. Not only is her book a smart and witty adventure that refuses to shy from the struggles with loneliness everyone faces (young and old), but it also seeks to use wordplay and vocabulary in a fun Phantom Tollbooth kind of way that entertains and educates in equal measure. My worry with Disney’s live-action adaptation was therefore whether or not it could do the material justice since the absurdly hyperbolic nature of the whole always felt better-suited for the imaginative flights of fancy animation provides. Things like DiCamillo switching perspective every couple chapters to her superhero squirrel wouldn’t be easy, but I still looked forward to seeing how director Lena Khan might achieve it anyway.

It sadly doesn’t take long to realize she’ll never actually get that chance, though. Not with the script Brad Copeland has written. Gone are the shifting vantage points. Gone is the debilitating sense of dread an already-ended marriage supplies parents and child alike. Gone are the unexplained fantastical bits of color like the troll-infested world of Blundermeecen and even the brilliant meta notion that DiCamillo’s heroine Flora (Matilda Lawler) constantly imagines dialogue bubbles and comic book expository declarations manifesting above the eccentric heroes and villains of her story—the most cinematic aspect the source material contains. All those idiosyncratic flourishes that earned this tale a Newbery Medal in 2014 are stripped away to leave a generically comedic escapade that loses a majority of its dramatic weight.

Flora & Ulysses is far from Brothers Grimm material, but Disney definitely gives it the treatment they gave those German fairytales serving as the basis of the studio’s early masterpieces. Where those still allowed for villainous maternal figures and complexity, however, this version strips that away too. And it’s mainly because of that seemingly small alteration from Flora’s parents (Alyson Hannigan’s Phyllis Buckman and Ben Schwartz’s George Buckman) being divorced to now only being separated. That ultimately proves a huge difference emotionally when you look at the grand scheme of things. Because rather than be about Flora’s feelings of abandonment by both due to their mounting depression, Copeland makes it about mending that bigger fence despite that real-life outcome often being more fantastical than what’s on-screen.

I get why the decision was made: marketability. Disney must worry about commercial appeal and inching further away from the darkness children face is their idea of not alienating audiences. This is a troubling development because they didn’t used to tread so softly. Their villainesses used to be authentically formidable as figures young kids deal with in real life. And that’s exactly what Phyllis is on the page. She’s selfish and vain. She treats the typewriter she writes her romance novels on and a pristine porcelain lamp as being more valuable than her own comic book-obsessed child because they are things she can control. The only thing Phyllis can’t manage is Flora and her self-proclaimed cynic’s contrarily imaginative drive to believe in love even though losing it hurts.

Hannigan’s Phyllis is none of this. She’s a mother trying to balance work and home and crippling self-doubt and the worry that her family is falling apart. She’s given equal footing to Schwartz’s George (who more or less embodies the same attributes on the page albeit a lot more energetically) as a troubled soul lost in love and desperate to regain it. So while Phyllis is still not a huge fan of Flora’s new rodent friend Ulysses, it’s not because his obvious “powers” are dragging her daughter further away from “normalcy.” She merely sees him as bad luck. Her animosity is thus sanitized so that the rebuilding of trust between Phyllis and Flora as the main crux of the story’s quest for redemption is excised completely.

What rises in its place is an external antagonist via Animal Control officer Miller (Danny Pudi). Why? Because letting the heartbreaking drama and truly heinous words and actions endured by Flora on behalf of Phyllis drop to the cutting room floor for a utopian vision of the perfect family that just lost its way needs something to fill that void. And if you’ve already removed real trauma from the text, you’re not going to inject it somewhere else. No, you’re going to create a slapstick character always holding a smile behind his determined eyes to become battered and bruised as the Buckman’s new, communal source of ire. He’s a tired cliché adding little but distraction to move the targets they’ve placed on each other somewhere else.

Pudi is game for the role, but his presence undercuts Ulysses’ purpose as a superhero that acquired super strength, flight, and “understanding” (of English) after almost dying in a vacuum. The furry guy is still giving Flora and George a reason to break free from their emotional prisons, but he’s also a generic squirrel being hunted by Animal Control. And because Copeland and Khan lean on the latter, wonderful side characters like Dr. Meescham (Anna Deavere Smith) and especially Tootie Tickham (Nancy Robertson) are all but shells of the integral allies they were to Flora in the book. Even young William Spiver (Benjamin Evan Ainsworth) is watered-down as pure comic relief—enough that his being “hysterically blind” comes off as insensitive despite my never thinking so while reading.

The number of Disney Easter eggs doesn’t help assuage any thoughts that Copeland/Khan simply wanted to tell a lighter story either. From the integration of Marvel’s Avengers at the start, dialogue like “I love you 3000,” and a Toy Story alien pin, Flora & Ulysses becomes a commoditized billboard as much as it is its own entity yearning to possess meaning away from the studio that fronted the money to make it. That DiCamillo’s original was so funny, weird, and poignant should have been reason enough to hew closer to its brilliance instead of using it as a springboard towards something wholly different underneath its appropriated skin. I’d like to say those unfamiliar with the source will fare better, but the film’s homogenized narrative renders it inert regardless.

Flora & Ulysses will be streaming on Disney+ starting February 19.