Standing Up, Falling Down Review: Ben Schwartz and Billy Crystal Search for Clarity 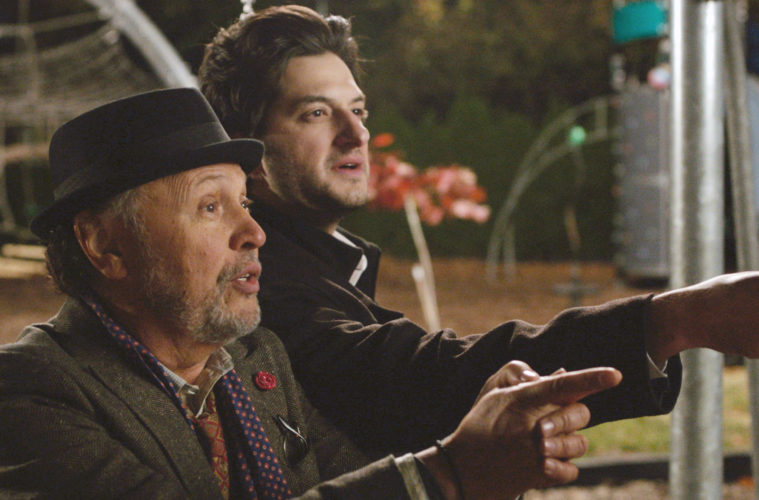 Sometimes your dream isn’t much of a dream at all. Maybe reality sets in after you’re already well along the path taken in error. Perhaps the epiphany arrives before you’ve sacrificed the correct choice in order to choose wrong. Ask Scott Rollins (Ben Schwartz) and he’ll probably tell you it can even be both at once if you happen to have two dreams vying for your attention. For him it was a career in stand-up comedy and the woman (Eloise Mumford’s Becky) he saw himself building a life beside. The former invigorated him while the latter instilled a debilitating fear. So what did he do? Packed up a suitcase, flew to Los Angeles, and left everything else behind in New York. And now, four years later, he’s back.

Which was the mistake, though? Pursuing success? Or saying goodbye—itself a metaphor considering he didn’t have the courage to give Becky that courtesy? Give writer Peter Hoare and director Matt Ratner credit for not allowing Standing Up, Falling Down to definitively say either was since “mistake” is too harsh a word. Scott might regret what he did because things didn’t work out the way he envisioned, but the person he was in that moment made his decision with purpose. He was acting with his own self-interest in mind. He could have handled it a lot better than he did in order to avoid the collateral damage he’s about to walk into upon his return home, but the act itself wasn’t a mistake. It simply didn’t work out.

Like any thirty-something moving back in with their parents, that’s an enlightened sense of understanding Scott cannot grasp. The wounds of what happened are too fresh. Aspirations were squashed. Love squandered (Becky has since married John Behlmann’s Owen). And this turn of events is only emboldening his father (Kevin Dunn’s Gary) to silently carry his long-held demeanor of “I told you so.” The hindsight necessary to therefore see the bigger picture takes years—decades even. Just ask the alcoholic dermatologist Scott sees peeing into the sink of his local dive bar. Marty (Billy Crystal) is a 65-year-old who drinks himself into a nightly stupor to avoid his own regrets. While he acknowledges his actions weren’t mistakes, however, he’s also keenly aware of the pain they caused.

These two are looking into a philosophical and existential mirror, Scott at his potential future and Marty at the blindness of his past. So of course they become fast friends serendipitously running into each other while wallowing in lonely self-pity at the bar or crashing the wake of someone they barely knew because of who would be there too. Marty shows Scott that pain can be funny. No bit will ever earn as many laughs as the authentic humor that stems from the unlikely scenario of a young guy getting high with his sexagenarian dermatologist. And in return Scott’s wealth of optimism as far as righting what he believes to be defining wrongs reminds Marty to never give up on his quest to reconcile with his estranged children.

The road to clarity won’t be easy, but they just might get there together since having someone in their corner is what’s been missing for too long with each. Scott was floundering in LA pretty much since the day he landed and Marty has been drowning in alcohol since the day his second wife passed away. They compensate rather than cope: cracking jokes at the expense of others and charismatically killing time with disposable strangers respectively. This leads to a wealth of entertaining scenarios for our enjoyment (Schwartz has a wonderful rapport with Grace Gummer as his character’s similarly cynical sister Megan while Crystal is having the time of his life making people smile and scowl in equal measure around him) and rough reminders of what ails them.

Scott pursues the pipe dream of getting Becky back while Marty strives for a simple return call from his son Adam (Nate Corddry). One should be impossible considering the ring on her finger and the other attainable considering a family’s capacity to forgive, but the opposite holds true instead. Why? Because Scott needs to know he can to discover if he wants while Marty needs to be left wondering if he’ll ever be welcomed back in Adam’s life to wake up and realize what must change in order to increase the odds. Despite Hoare having written his script to very specifically provide these men the precise narrative progressions that will help get them out of their own way, however, he won’t hand it to them on a platter.

That distinction is why Standing Up, Falling Down doesn’t buckle underneath its own inevitabilities. Nothing that we watch on-screen is surprising—not the fates of the characters or the ways in which they evolve and make good on promises hinted at in passing an hour beforehand. The moment Gary and Jeanie Rollins (Debra Monk) remark on how “awesome” Megan’s new boyfriend (David Castañeda’s Ruis) is proves the moment we know Scott will begrudgingly agree as soon as he meets him. It’s still a blast to watch that introduction, though, because the actors are having fun bringing it to life. The plot’s obviousness melts away because we’re having a genuinely great time as these flawed men grow ever so slightly with each passing minute. They feel real.

So too do their emotions. I won’t lie and say Schwartz won’t always be Jean-Ralphio from Parks and Recreation to me, but he shows some nice range here when it comes to the weight of Scott’s world crashing down and the empathy no mature person will provide him being found in Marty. And what a treat it is to see Crystal in a role with dramatic possibilities after so long. He’s as funny as ever with expert comedic timing, but the silent moments Ratner gives him to cook and drink in an empty kitchen before leaving a nostalgic message on his son’s voicemail that we know will go unanswered are unforgettably poignant. Both characters’ jokes as deflection become doorways onto their pain as each becomes the other’s salve.

Standing Up, Falling Down hits limited release and VOD on Friday, February 21.