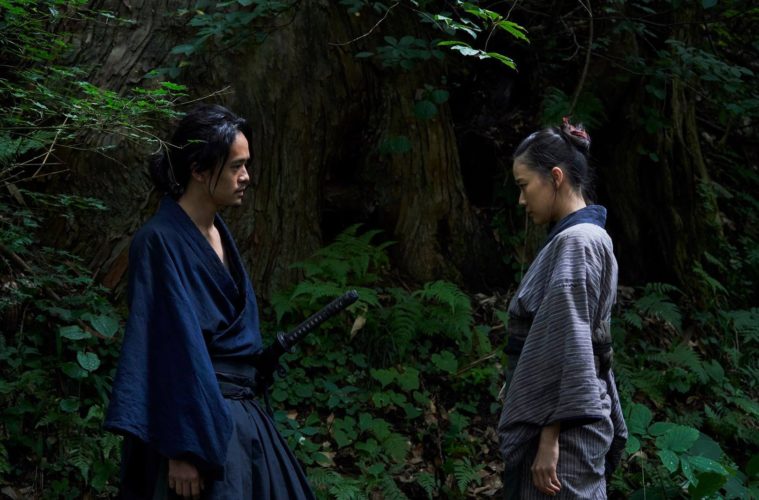 Japan Cuts festival, which takes place at the Japan Society in New York City, has become a staple in the sea of summer cinematic offerings in terms of counter-programming to the onslaught of weekly blockbusters and tentpoles. In such a rich program, it’s always a bit dizzying to choose one film over another, and while if you choose any options now playing until July 28 you are likely to have a good time, these are my personal picks for the five unmissable events.

Japanese cinema has always had a strange visual relation with Christianity and its symbols, exoticizing and equating it to something more like mythology than a faith. Although with a more interiorized approach, Hiroshi Okuyama’s debut doesn’t stray too far away from that tradition as it tells the story of 10-year old Yura, who recently moved to a new town and is enrolled in a Christian school, something that his parents were apparently unaware of. Yura’s exploration of faith turns around when he prays for the first time and a thumb-sized Jesus appears in front of him, apparently willing to concede his “wishes” (as Yura calls them), like finding a friend in school or having some money.

The film’s visual approach, which doesn’t want us to pay too much attention to the imaginary (or not) Jesus, as most shots that contain him are wide, where finding the miniature God is something akin to a game for the audience. Eventually the film finds its wavelength beyond the wishes, moving from a portrait of two friends growing up together, to then evolve into a harrowing drama in its final third. Even if the “kawaii” Jesus continues to appear, the point of view of the director is clear regarding how alone we truly are in this world, and that not even religion can fill that void, something that Yura learns the hardest way possible.

Kamagasaki is an old slum in Osaka, Japan, where poverty runs rampant and crime lords seem to control everything. But an early scene features one of the few kind events that happen in that place: the Sankaku Park Soup Kitchen, an organization which uses a giant kama (or “sake cup”) to cook soup for the homeless and anyone who approaches them. It’s that kind of extreme poverty that’s the background for a film that pits a pickpocket, the young son of a travelling actor, a prostitute, and the son of the boss of the Kamatari gang into a search for the “sacred” kama, used by the Kamatari gang to induct new members and to pass the baton of who’s the boss.

Shot on film, with direct sound and an extremely low budget, the film feels like an exaggerated social exploration of the problems that the common people of Kamagasaki live through every day. The absurd elements are present, but also the highly political stakes that the film takes when it comes to social outrage, police brutality, international welfare organizations, and even Karl Marx being name-dropped. The grainy look of the film helps accentuate the feeling that what we’re being shown are the real streets of Kamagasaki, with all its guarded posts to avoid people from sleeping in the street, but also makes the fantastical elements appear congruent with the world, like when a priest starts to deliver justice by torturing criminals. A film that’s just one of a kind.

Tsukamoto is the big guest at this year’s Japan Cuts, as he’ll also receive the Cut Above award, given to those who’ve made with their careers an outstanding achievement for Japanese cinema. And for sure, there’s no other way to define Tsukamoto’s career, as he’s pioneered in genres and visual styles that have taken the world by storm. Things are no different for his latest film, which premiered at last year’s Venice Film Festival. It centers on a wandering samurai who’s working in a small farming town as he waits for his eventual travel to the big city, all of this while training a young farmer who apparently has quite the talent for fighting. Suddenly, a master samurai (played by Shin’ya Tsukamoto himself) appears and wants to hire both the wandering samurai and the farmer so they can be part of a paying army that’s being formed to protect the nearby city. The joy and the fulfillment that these characters feel is cut short with the appearance of some violent thugs that menacingly surround the town.

The film constantly shifts in terms of its visual style, particularly when it comes to the camera movements and editing. At the start, the camera seems obsessed in capturing every gesture and small attitude change in each character, while the editing constantly cuts between the characters at play, and the framing is absolutely dictated by the performances. It’s strange how the camera seems to slow down whenever the samurai master is near, as if the presence of the director himself were to give the visual style a different approach, which is telling in a sequence in which he’s watching a training and we see his face in a static shot, while what he’s seeing is the fighting with a constant moving camera. In a sense, the actual story of the film isn’t as interesting as the ways in which the cinematography and the acting work together in creating the sensation that the world is slowly sinking into darkness.

Maybe the most genre-twisting film of the program is this awkward comedy that constantly evolves into something far more sinister and dark than what the innocent beginning may suggest: Taka, a simple yet unemployed man, plays the bongos at the countryside house of his wheelchair-bound uncle, with whom he lives with and takes care of. He’s constantly being insulted and doubted by the old man, to which Taka responds only with bangs on his bongos, coming up with some sort of musical language which later devolves into a happy mellow song that gives way to the opening credits of the film. It’s only time until Taka’s uncle dies, and the old man’s brother, who allows the poor man to keep living there, inherits the house. It’s then that a family, escaping from Tokyo’s life style, enters the small countryside town, willing to do anything to open a natural style café in an old house… Taka’s house.

Although clueless for a long stretch of the film, eventually Taka realizes that he has to defend the place where he’s staying, even breaching the trust that his other uncle has put on him. Revealing more about the movie would be unkind to an unsuspecting viewer, but the series of twists, turns, and even mean ways in which some plot elements turn onto the protagonist and his companions is almost unbelievable. To be seen to be believed, especially its final five minutes.

1. The Legend of the Stardust Brothers – Hoshikuzu kyôdai no densetsu (Macoto Tezuka)

The most important film to be seen in a big screen is a repertory title, a Japanese musical that became a cult hit both in its country of origin and throughout the world for those “in the know.” Recently restored, this is a unique opportunity to see one of the craziest musicals that have ever been put to film, comparable only to classics like Rocky Horror Picture Show, Phantom of the Paradise, and Little Shop of Horrors. Based on music written by Haruo Chikada, the director (the son of famed manga artist Osamu Tezuka, of ‘Astroboy’ fame) took the songs and created a plot around them, following the story of a duo called Stardust Brothers who became one of the most popular music acts in Japan, only to fall into the greed and shady businesses of the record label that signed them up.

What to some might sound just like your average rise and fall story, this movie packs a visual inventiveness throughout with catchy songs that attract beyond the obvious language barrier. The way in which each song is performed and shot in a different manner puts the horror film Hausu to mind, specially in the way that it mixes colors with animation, but here adding dancing choreography, chase sequences, and how the songs thematically tie up to every moment that the two main characters are living through, even if they were written before there was even a script for the film. Tezuka’s talent is undeniable, and it’s a shame that his films aren’t better known in the West, but here’s a chance for his other equally inventive films to finally reach to us. For now, let’s enjoy this crazy musical; it’s the only one you’ll see this year that has a song about how singers are trained pets under the control of record labels.