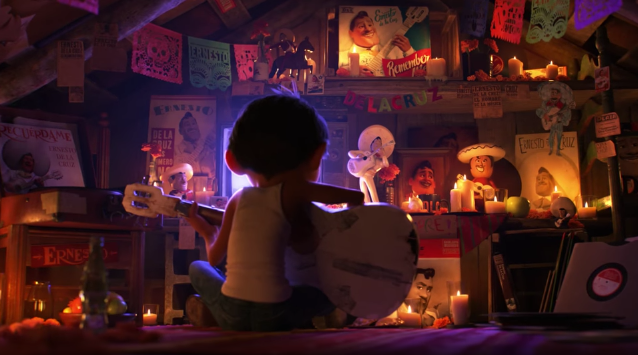 First Trailer for Pixar’s ‘Coco’ Shows the Power of Music

Following this summer’s Cars threequel, Pixar’s next animation features the return of Toy Story 3 director Lee Unkrich. Coco, set during the Day of the Dead in Mexico, follows a boy living in a village who adores music, but his shoemaking family has banned it for generations as they believe it’s a curse passed down from his great-grandfather. This sets off a journey to discover more about his past and his passion.

Featuring the voices of Benjamin Bratt, Gael García Bernal, newcomer Anthony Gonzalez and Renée Victor, the first trailer has landed. First introducing our main character as it looks to be celebration of Mexican culture, the preview segues to reveal a much larger adventure at hand. Ahead of a release this Thanksgiving, check it out below, along with the first poster.

Despite his family’s baffling generations-old ban on music, Miguel (voice of newcomer Anthony Gonzalez) dreams of becoming an accomplished musician like his idol, Ernesto de la Cruz (voice of Benjamin Bratt). Desperate to prove his talent, Miguel finds himself in the stunning and colorful Land of the Dead following a mysterious chain of events. Along the way, he meets charming trickster Hector (voice of Gael García Bernal), and together, they set off on an extraordinary journey to unlock the real story behind Miguel’s family history.