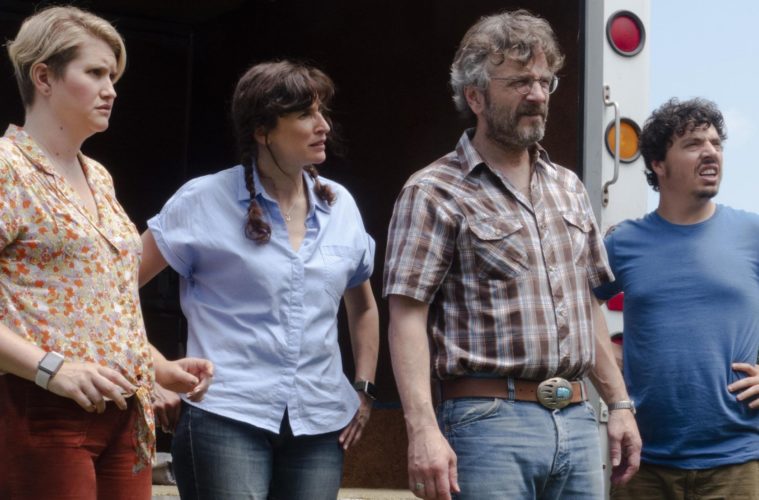 After finding her voice in humorous, touching films like Humpday and Your Sister’s Sister, Lynn Shelton has dedicated more time recently to the world of TV with GLOW, Love, and more. She’s now back with her eighth feature film, Sword of Trust, which premiered at SXSW and will arrive in theaters next month. Starring Marc Maron, Jillian Bell, Michaela Watkins, Jon Bass, Toby Huss, and Dan Bakkedahl, it follows the peculiar story of attempting to pawn off an inherited sword purported to be from the Civil War.

Coming from IFC Films, the first trailer has now landed for the strange, entirely improv journey, which features Maron’s first leading role in a film, not to mention original music he wrote and performed. Ahead of a July release, check out the trailer below.

This riotously funny, improv-based eighth feature from acclaimed director Lynn Shelton (Outside In, Your Sister’s Sister, Humpday) is filled with her trademark insight and humanism while slyly exploring our increasingly divided culture of conspiracy theories and revisionist history. When Cynthia (Jillian Bell, 22 Jump Street) and Mary (Michaela Watkins, “Casual”) show up to collect Cynthia’s inheritance from her deceased grandfather, the only item she’s received is an antique sword that he believed to be proof that the South won the Civil War. The two attempt to unload the object to a curmudgeonly pawnshop owner Mel (Marc Maron, “GLOW”) and his man-child sidekick Nathaniel (Jon Bass, Molly’s Game). When Mel and Nathaniel discover there’s a black market for the relic, the two pairs reluctantly join forces to sell this rarefied ‘prover item’ to the highest bidder. The adventure that ensues takes the four of them on a wild journey into the depths of conspiracy theory and Southern disillusionment. Anchored by a hilarious and emotionally raw performance from Maron (who also wrote and performed the music), Sword of Trust is a sharp, unexpected ensemble comedy with Shelton’s authentic take on the complexities of interpersonal relationships on full display.

Sword of Trust opens on July 12.