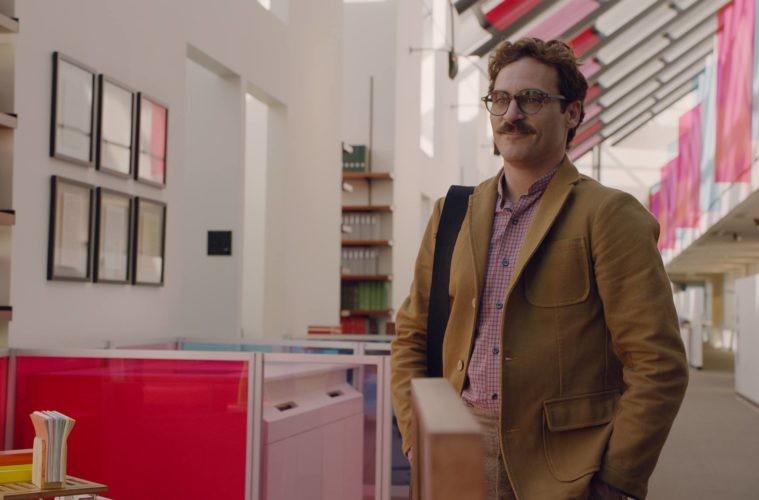 After making a fierce return last year with Paul Thomas Anderson‘s The Master, Joaquin Phoenix entered 2013 with a batch of highly anticipated projects. The Cannes Film Festival saw a premiere of James Gray‘s The Immigrant, while, next month, the New York Film Festival will welcome it and host the bow of Spike Jonze‘s Her. Today brings updates on both titles.

First up, above, one can see a new still from the latter film, which just got announced as part of the Rome Film Festival’s competition slate. As for The Immigrant, those expecting a possible late 2013 bow will be disappointed. The Weinstein Company has handed off the period drama to their VOD shingle Radius-TWC, which is now planning a theatrical release for early 2014 — but, according to a statement, they have “not yet determined the appropriate VOD window.” Considering their VOD bows are usually tied within about five weeks of a theatrical release, we can hope concrete details soon arrive. The film, also starring Jeremy Renner and Marion Cotillard, is one we commended at Cannes, saying in our full review, “Set in 1921 New York, The Immigrant is writer-director James Gray‘s sprawling tale of an American dream gone awry. Immaculate production design and stunning cinematography by Darius Khondji evoke the era-appropriate atmosphere in a manner not at all dissimilar from Gordon Willis‘ design of The Godfather Part II.” While we await U.S. release news, France will receive it in November, and their poster for the film has landed, which can be seen to the right (unfortunately not in high-resolution for the time being); a behind-the-scenes still is also available below.

In our last bit of Phoenix-related news: the actor entered the rap game for the faux documentary for I’m Still Here, but this fall, he will take part in a sincere effort. Over the summer, none other than Kanye West gave colleague Pusha T a Phoenix-produced beat for his October-bound album My Name Is My Name. Today brings our first listen of the track, titled “King Push,” which kicks off the proceedings. Check out about half of the single below in a 1.5-minute sample, along with a preview of the album’s other tracks.

Update: Watch the full video below. Which of Joaquin Phoenix’s upcoming projects are you most looking forward to?