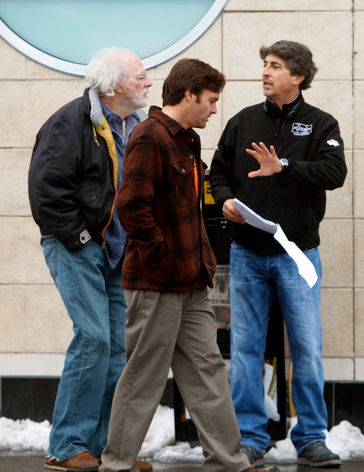 Although he’s been shooting for several weeks, we’re just now getting our first glimpse at the stars of Alexander Payne‘s The Descendants follow-up, Nebraska. The director has always had a perfect knack for casting and it seems to continue as Bruce Dern and Will Forte team for the black-and-white production that follows a curmudgeonly old drunk who believes he’s won a million dollars from a sweepstakes and drags his son on a roadtrip to collect the prize.

Speaking with Billings Gazette, producer Albert Berger also indicated when we may see the film, saying it’s aiming to hit theaters “about a year from now” and it could perhaps fit into the slot of “a Christmas movie.” Adding that his films are always awards contenders, he said this one will incorporate “raw and funny” elements akin to his other work, but also a “darkness just below the surface.”

Considering his last film made nearly $200 million worldwide with a November release, I could easily see producers attempting to repeat that after an initial fall festival bow — which will be right around the time Payne heads into production on his next film, an adaptation of Wilson. Check out many more details on that (and Nebraska) here, as well as photos below for the film also starring Bob Odenkirk, Devin Ratray and Stacy Keach. The bickering father-son of Nebraska, Woody (Bruce Dern) and David (Will Forte), hold different agendas for their trek along the highways and byways of Montana, Wyoming, South Dakota and northern Nebraska. Woody, a unrepentant, alcoholic old coot estranged from everyone in his life, is hellbent on collecting a sweepstakes prize that doesn’t exist. David, the good-hearted but exasperated son, decides to placate his pops by promising to drive him from Billings. Mont. to the prize company’s home office in Lincoln, Neb. by way of several detours. He’s sure his father will come to his senses long before their destination.

This mismatched pair’s road-less-traveled adventure in the son’s car finds them passing through Woody’s old haunts, including his hometown, the fictional Hawthorne, Neb., a composite of Hartington, Wausa, Bloomfield, Norfolk and other rural burgs. At nearly every stop they encounter the detritus from Woody’s life, which like the broken down Ford pickup in his garage he can’t get to run is a shambles of regret and recrimination. Woody’s made the fool wherever he goes. A longtime nemesis, Ed Pegram (Stacy Keach), is a menacing presence. By story’s end this father-son journey turns requiem. To salve his father’s broken spirit David performs a simple act of grace that gives Woody a valedictory last laugh.

Are you looking forward to seeing Payne’s next film late next year?