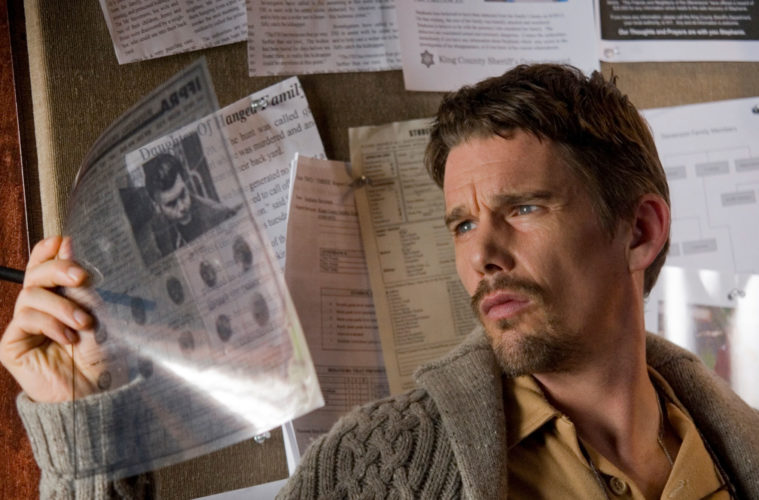 The latest studio to release their 2012 line-up is Summit Entertainment (although, they may not be around this time next year, with Lionsgate in serious talks to acquire them). Their line-up is pretty shaky, with their cashcow Twilight the biggest highlight, being the last film in the series. A number of indies worth noting do pop up though. First on the list is the horror film Sinister, from The Day The Earth Stood Still‘s Scott Derrickson. Co-written by C. Robert Cargill (better known by AICN’s Massawyrm around these parts), the feature stars Ethan Hawke and we get two stills above and below. These are all coming from Collider and you can check out their site for more.

A true crime novelist (Ethan Hawke) struggling to find his next big story, moves his family into a house where the horrific murder of an entire family took place. But after finding a box of home videos in which other families are also brutally murdered, his investigation leads him to a supernatural entity that may be placing his own family in harm’s way. Sinister hits theaters August 24, 2012. We also have the first official still from Jonathan Levine‘s zombie love story Warm Bodies. This is a big departure from his cancer comedy 50/50, but still dealing with death, in a much different way this time around. Based on Isaac Marion‘s novel, the film stars Nicholas Hoult (below), Teresa Palmer, Rob Corddry and John Malkovich. I’m sick of the genre, but Levine in a talented guy, which justifies my slight anticipation. Zombies love people, especially their brains. But R (Nicholas Hoult) is different. He’s alive inside, unlike the hundreds of other grunting, drooling undead—all victims of a recent plague that drove the remaining survivors into a heavily guarded city. Now the Zombies roam about an airport terminal, searching for human prey and living in fear of the vicious Boneys, the next undead incarnation.

One day, R and his best friend M lumber toward the city in search of food. There, R first sets his eyes on JULIE (Teresa Palmer), a beautiful human. Determined to save her—first from the other Zombies and then from the Boneys—R hides her in his home, a cluttered 747 aircraft. Julie is terrified, and R’s grunted assurances of “Not…eat” do little to calm her. But when R begins to act more human than Zombie, coming to her defense, refusing to eat human flesh, and even speaking in full sentences, Julie realizes that R is special.

After a few close calls with the Boneys, and with her father mounting an armed search for her, Julie realizes she can’t hide forever. So she sneaks back home, leaving R broken-hearted. Desperate to see her, R decides to comb his hair, stand a little straighter, and impersonate a human long enough to get past the city guards. If only he can prove to the humans that Zombies can change, maybe R and Julie’s love might stand a chance. But with the rampaging Boneys heading toward the city and Julie’s father intent on killing R and his Zombie friends, the stage is set for an all-out battle between the living and the undead.

A genre-bending tale of love and transformation, WARM BODIES is a story about a boy who loves a girl…for more than just her body.

Warm Bodies arrives on August 10th. Lastly, we have a new batch of photos for two films that are low on my to-see list. First is Gone, the thriller starring Amanda Seyfried. The trailer wasn’t promising and the February 24, 2012 release doesn’t instill much hope. Then we have some new stills from Stephen Chbosky‘s The Perks of Being a Wallflower. I know his book is beloved, but the synopsis isn’t doing much for me. I do like the cast though, especially Ezra Miller in what looks to be his least-evilest role yet after Aftershool and We Need To Talk About Kevin. Check them out below for the film arriving sometime this year. In the suspense thriller GONE, Jill Parrish (Amanda Seyfried) comes home from a night shift to discover her sister Molly has been abducted. Jill escaped from a kidnapping a year before and is convinced that the same serial killer has come back and taken Molly. Afraid that Molly will be dead by sundown, Jill embarks on a heart-pounding chase to find the killer, expose his secrets and save her sister. A funny and touching adventure based on a best-selling novel that has sold over a million copies in the U.S. and has been published in 16 countries and 13 languages, THE PERKS OF BEING A WALLFLOWER is a modern classic about a shy, sensitive teenager caught between trying to live his life and escape it. Which Summit film are you looking forward to most?