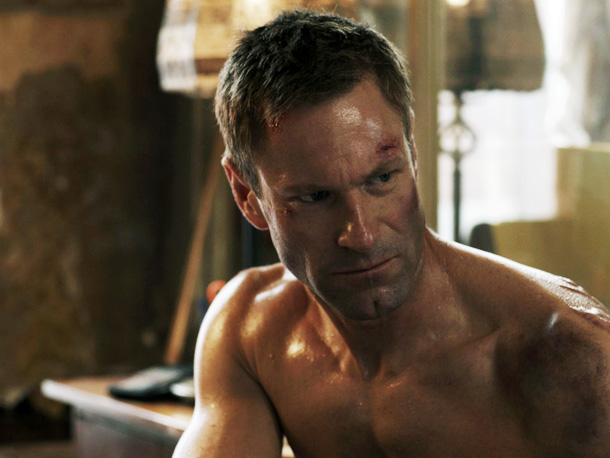 After achieving worldwide recognition in The Dark Knight, it looks like Aaron Eckhart enjoys getting bruised up in his films. He nearly got demolished by aliens in Battle: Los Angeles this spring and he’ll be seen as a fleeing ex-CIA agent in the thriller The Expatriate next year.

EW provides us with our first look above for the film that sees Eckhart heading on the run with “his estranged daughter (Olga Kurylenko)” in order to avoid his employers that “mark them both for termination as part of a wide-reaching international conspiracy.” The film is directed by North Face helmer Philipp Stölzl, but we have no specific info on a release date.

We also have our first look at a firefightin’ Josh Duhamel from Fire with Fire along with Rosario Dawson, thanks to EW. The cast also includes Bruce Willis, Vinnie Jones, Vincent D’Onofrio, 50 Cent and Quinton ‘Rampage’ Jackson. Don’t expect another Ladder 49, as this one is actually a revenge thriller, with Duhamel playing “a firefighter forced into witness protection after seeing a gangland murder.”

TV director David Barrett (The Mentalist, Castle, V) steps up to feature filmmaking in the story that sees Duhamel turn into a “workingman James Bond” with his close friends getting harassed by those who know about his past. We also don’t know a release date, but expect a 2012 bow and you can check out the first photo below. Which film are you more looking forward to?